I’m sure, like me, you were shocked and saddened by the events that took place in Paris a few days ago. For me, it was almost surreal because for the past few weeks I’ve been heavily steeped in the events leading up to and during the French Revolution. I feel like I spend a good part of each day in Paris, even if it is the Paris of the past.

As writers, we often have to limit how much research we can include in our books. I find out so many cool things, but I can only use about a tenth of them and only those that fit in the story. So I thought I’d share here 5 of the fabulous facts about France I’ve discovered through my research.

Chocolate and Coffee=Yum!
If you love your mocha latte at Starbucks, you are not alone. Parisians have been adding chocolate to coffee since at least the 1700s. Know what the prisoners drank in the Bastille? Coffee with chocolate.

The Bastille
At one time it probably did house political prisoners who did nothing more than anger the king or look at a nobleman the wrong way. But by the time of its fall in 1789, the Bastille held only 7 prisoners, who all deserved to be there. One was the marquis de Sade, who was moved to an insane asylum before the prisoner was stormed. Many aspiring writers made an effort to be imprisoned in the Bastille because being able to say you were a prisoner there gave you a certain cachet and could make your career. If you had money, your stay didn’t have to be unpleasant. A few livre bought furniture, books, paper and pen, a fire, and don’t forget that coffee with chocolate.

The Eiffel Tower
Here’s something I love about the French. They are masters of resistance. When Hitler visited Paris during World War II, the French cut the lift cables on the Eiffel Tower so Hitler would have to climb the steps to go to the top.

The French are Polite
The French very much have a café culture, especially in Paris. During the French Revolution, the café you frequented mattered. Jacobins drank coffee in one café while royalists in another and those in favor of a constitutional monarchy in another. The stereotype of the French is that they’re rude, but there’s a coffee house in Nice where it pays to be polite. 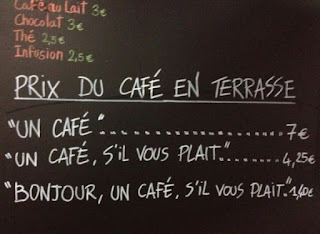 The French Fry Almost Wasn’t
It was illegal for humans to eat potatoes from 1748 to 1772. The bad harvests that led to famine (and ultimately to the French Revolution) made the potato, which had been considered a food for livestock only, more appealing. In 1794 Madame Merigot published The Female Republican Cook, which was the first potato cookbook.

What are some interesting facts about your favorite city?