By Pamela Sherwood November 23, 2015
When the pantry jars are full of mince-meat and the shelves are laden with sweet spices for a cake,
When the butcher man sends up a turkey nice and fat to bake,
When the stores are crammed with everything ingenious cooks can make,
It's Thanksgiving Time!

It’s Thanksgiving Week, and for those of us who celebrate it, I’m not even going to pretend it’s not All About The Food. 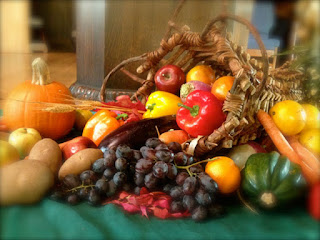 OK, it’s also about community, family, closeness, and finding things to be thankful for in trying times. And food!

Mashed potatoes will be on a lot of menus, and, despite their being such a simple dish, there must be a million and one variations on how to prepare them! And countless debates on which way is best. Electric mixer, ricer, or hand-held potato masher? Russets, Red Roses, or Yukon Golds? Skin-on or skin-off? Milk, broth, or cooking water? Hot milk or cold?

My earliest memories of making mashed potatoes involve Russets: starchy potatoes that whip up nice and fluffy. But over the years, I’ve come to appreciate the qualities other kinds of potatoes add to the mix. 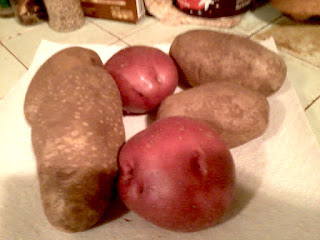 Red (and White) Rose potatoes are “boilers”: waxy potatoes that hold their shape well in soups and stews. Adding a few of those to mashed potatoes lends a firmer, pleasantly creamy texture, especially helpful if the Russets get overcooked and emerge a little softer than the ideal. Yukon Golds are all-purpose spuds with a slightly waxy consistency and a mildly sweet flavor.

So, when we assemble the ingredients for our version of Mashed Potatoes, we use a variety. Russets still predominate, but at least a third of the potatoes are Roses or Yukons.

6-8 medium to large potatoes (Russets, Red/White Rose, Yukon Golds)
¼ cup of milk (you can use less or more according to preference)
3 Tbsp. butter or margarine
Salt, pepper, onion powder

Peel potatoes and cut in chunks (the smaller the chunks, the faster they’ll cook).  Place in pot with enough water to cover the potatoes by several inches.  Heat to boiling, then turn down to medium heat. Cook until potatoes are tender, then remove from heat. 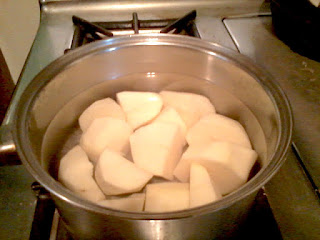 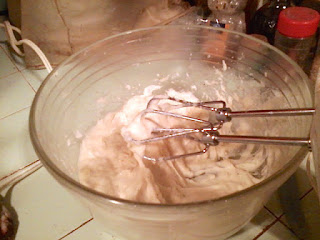