As you know, I write contemporary romance for Sourcebooks. The second Beauty and the Brit installment, His Kind Of Trouble, is coming out November 3. But I also write a humorous mystery series. Diner Knock Out will be released October 20.

The fourth book in the Rose Strickland Mystery series finds our heroine at a crossroads with her criminal boyfriend, and she’s on the hunt for a missing MMA fighter. 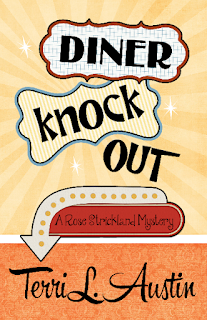 As I walked through the bar’s parking lot, I dodged potholes as big as moon craters. The remaining blacktop had melted into a gooey mess, leaving the soles of my flats tacky with tar. Good thing I wasn’t wearing kick-ass boots, now wasn’t it? That’s me, Rose Strickland, finder of silver linings.


I pulled open the glass door and stepped into the dim interior, taking a minute to stand in place and drink up the cool, dry air. I drew a few glances from the patrons before they quickly lost interest in me.


Lynyrd Skynyrd played over the speakers, almost drowning out the hum of voices, and flashing neon beer signs livened up the dingy walls. The after-work crowd from the hospital was here to represent. Men and women dressed in colorful scrubs sat at various tables and noshed on fried cheese sticks. My stomach growled in protest. That fortune cookie wasn’t cutting it.


A gaggle of mechanics, wearing grease-smeared t-shirts, sat at the bar and watched the ballgame on an ancient TV anchored to the ceiling. No big screen for Ernie’s.


As I scanned the place, I noticed my boy, Ted Benson, was MIA. I headed to the far side of the bar to make use of the facilities. And as I entered the small alcove, I shot a glance at the men’s room. I wanted to report back to Andre that I’d exhausted every possibility in my search for Ted, so I walked to the door and eased it open, taking a peek inside. Fortunately, the urinals were empty. Smelly, too. The floor…ugh. Why did men have such terrible aim? Was it really that hard to point and shoot?


The door to the only stall stood open. I looked inside, just to be thorough. No Ted.


He had to be out back, having a smoke or a breath of fresh air. His wife hadn’t mentioned a nicotine habit, but maybe he was hiding it. She seemed extremely health conscious. Was this Ted’s big secret? An occasional beer and cig? Mr. Vanilla—living on the edge.


After using the ladies’, I returned to the main room and spotted an exit near the pool table. Stepping outside, I glanced up and down the side street. There was no sign of him anywhere. A knot formed in the pit of my stomach.