Cloak billowing in the wind, tricorne hat perched proudly on his head, he galloped across my television screen and changed my life forever. 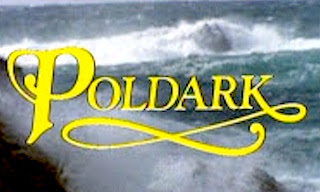 Hyperbole? Not by much.

One summer, our local PBS station broadcast the 1970s miniseries Poldark--about the changing fortunes of an ancient Cornish mining family--and its sequel back-to-back. Almost 30 weeks of high drama, smoldering romance, and swashbuckling adventure, unfolding against the wild, beautiful landscape of 18th century Cornwall. The lavish production was lovingly written—despite some dramatic liberties taken early in the series—and wonderfully cast, with a brooding Robin Ellis as the title character (a soldier who returns to a ruined estate and a sweetheart now engaged to his cousin instead), and a fiery Angharad Rees as Demelza, one of the main women in Poldark’s life. Other standouts included Ralph Bates, as Poldark’s smarmy parvenu nemesis, George Warleggan, and Richard Morant as dashing doctor Dwight Enys, who becomes one of Poldark’s closest friends.

Needless to say, I adored the series and the novels by Winston Graham that inspired it (more on those in a moment). So I felt a mixture of excitement and trepidation this past winter when I saw a promo for the new Poldark, which will begin airing this summer (As of this posting, the first episode will have been shown on PBS.)  Did it stand a chance of being as good as the original? Would the producers understand how important the whole sense of Cornwall as a community was to the series? Would they take the time to tell the story properly, without shortchanging key events or relationships? How good would the casting be? And could I accept Aidan Turner as Ross Poldark when the last time I saw him he was three feet shorter, fully bearded, and making eyes at an elf?

Fortunately, initial word on the new Poldark, which has already aired in the UK, has been reassuring. Winston Graham passed away in 2003 (at 95, a year after writing Bella Poldark, the 12th and last Poldark novel!), but Robin Ellis is still living and plays a cameo role in the new series. Several British newspapers have interviewed Ellis about both Poldarks, and he has had only positive things to say about his involvement with them. Ellis also told the Daily Mail, "The key to the enduring popularity of Poldark is the characters and the story and the writing . . . Winston Graham created this community where there is love, hate, poverty, riches, all human life is there. But he does it in a three-dimensional way so you fall in love with it. You care for the characters."

That particular quote gladdens my heart because I came to love the novels as much as the miniseries—and because Graham has been a huge influence on my own work. Waltz with a Stranger and A Song at Twilight are both set largely in Cornwall, though a century later, and I have striven to capture the same sense of place and community, the same wealth and range of emotions that Graham does in The Poldark Saga.

Graham’s characterization has shaped mine as well: Ross is an original, as is the inimitable Demelza, but my heroes bear more than a trace of his stamp. Like Ross, James Trelawney is happiest and most himself in his native county, while Robin Pendarvis shares his initials, along with the first name of Ross’s best-known portrayer. Both men are also strong, stoic, and down-to-earth, with little tolerance for snobs or fools. And their heroines are matches for them in every way. I’ve always felt that Graham really liked and appreciated strong, capable women, which isn’t always the case with male authors!
My books also contain what I think of as “Poldark moments”—scenes in which desire and attraction play out against the dramatic Cornish landscape.

Like this scene in Waltz with a Stranger, where the heroine, Aurelia—wading in the sea—first sees James in his native element:

The wind off the sea whistled in her ears and flapped the wide brim of her hat. On impulse, she loosened the ribbons under her chin, took off the hat, and stood bareheaded in the sun, letting the breeze ruffle her hair, tease it loose from its pins. Her skirt billowed around her, and she stepped forward more boldly into the surf. The cold felt merely invigorating this time, and she stood with the sea swirling about her ankles, gazing toward the horizon, where the deepening blue of the sea met the softer blue of the sky.


She did not hear the hoofbeats at first, and even when the sound reached her ears, she did not immediately identify them as such. They seemed nothing more than part of the sea’s rumble. Not until she felt the ground quiver beneath her feet did she look up to see the lone horseman galloping toward her.


Beneath the open sky, horse and rider moved as one, the latter’s head gleaming with the same inky gloss as his horse’s hide, making his shirt seem whiter by comparison. Watching him approach, Aurelia experienced a jolt of recognition almost physical in its intensity. No London dandy, transplanted from his usual environs of Hyde Park and Rotten Row.


No London dandy—but James Trelawney, Earl of Trevenan, in his rightful place.

Every grain of sand, every blade of marram grass matters in Graham’s world, and no character is too insignificant to have a backstory and an inner life. Whatever their station, Graham’s characters love and hate, work and dream, fight and make peace, and involve us—the readers—in their struggles. What more can one ask of any story? The family saga may be out of literary fashion at the moment, but I for one would love to see it revive.

Meanwhile, I hope the new series will indeed be as good as the old. And I hope that a new generation will discover Graham’s books (I certainly wouldn’t complain if they discovered mine as well!) And I hope that I can find room in my heart for Aidan Turner’s Ross, even if Robin Ellis will always be the definitive portrayer to me. He had Graham’s official stamp of approval, after all. One of Ellis’s most cherished possessions is a copy of Ross Poldark containing the following inscription from the author:

I have so far watched twelve instalments [sic] with hyper-critical gaze and have never seen you put a foot wrong.


You've played many parts and will have many more, but I doubt if you'll play another character in which you achieve a greater identity with what the author intended, or give him – and about ten million other people – so much pleasure.

What particular authors or works have strongly influenced or inspired you?