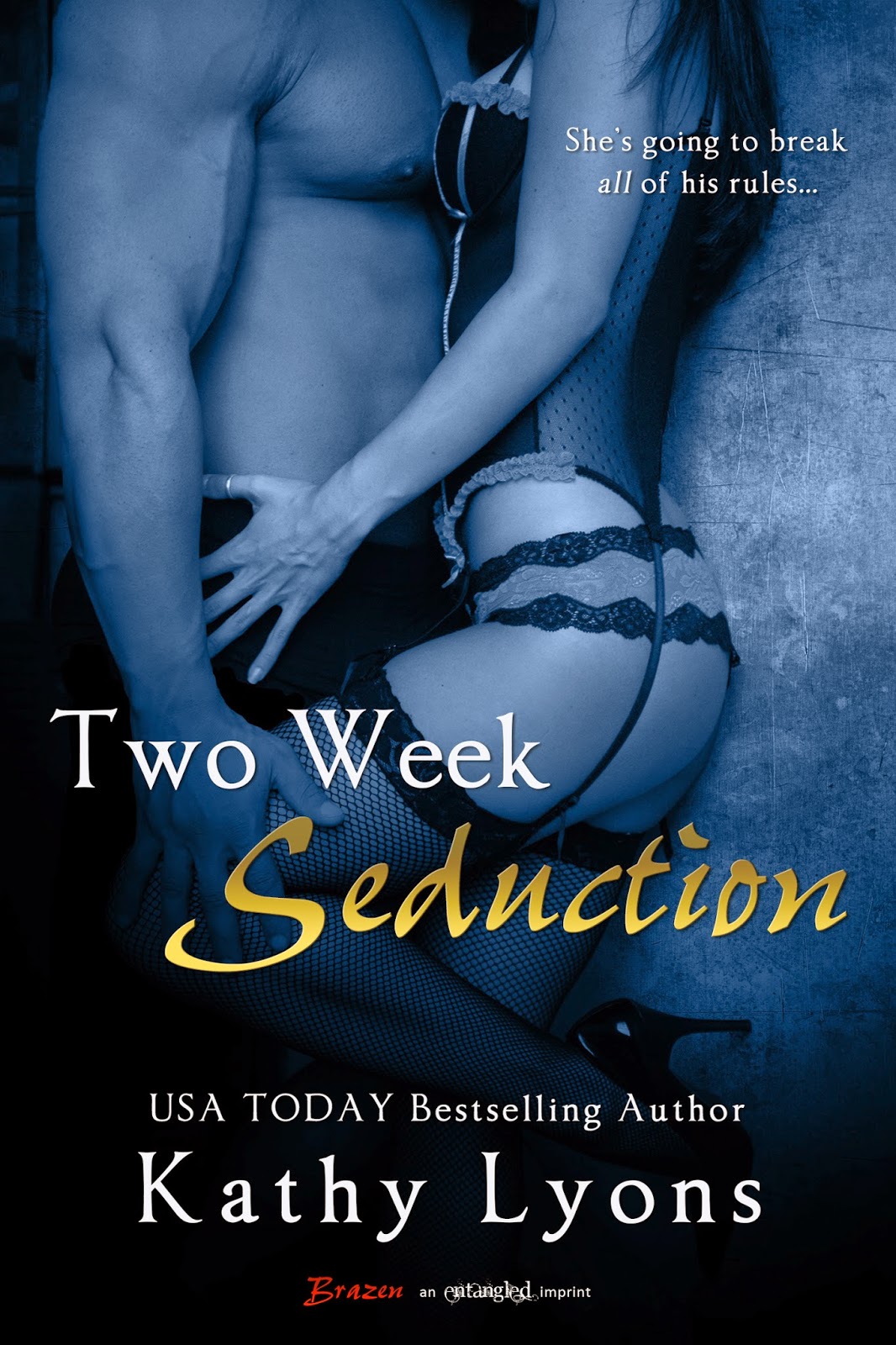 So most everyone here knows me as Jade Lee. I write steamy, funny regency era historicals. But every once in a while, I just want to cut lose with a fun contemporary with lots of young sweaty sex. I'm not talking 50 Shades or any kink. Just a hero and heroine who are both at a turning point in their lives. And while they're dealing with all the life challenges, they end up discovering love and passion with each other.
That's where Kathy Lyons comes in. She's my contemporary alter ego who just let's fly in quick, fun, sexy books. Her latest Two Week Seduction is out now in ebook. [insert cover] Buy links and the first chapter can be found here. [Insert link to my webpage] It's gotten great reviews, so buy it now and enjoy!
And for those who want a little more, here’s an excerpt of a pool game for pretty high stakes.

John grabbed the pool cue and tried to remember how to play. The old guy had wisely stepped back though it had taken a nod from Alea for him to give in. Another time, he’d be grateful for the guy’s level-headed advice. Right now? He was determined to beat Alea’s leather-clad, ginger ale ass.
She was a good pool player, but she’d learned most of her moves from him. Sure it had been a while since he’d held a cue stick in his hands, but this was one game that came back quickly.
“Rack ’em,” he ordered.
“Sure I’ve got enough to stack?” she taunted.
Was that a crack at his attention to the waitress? He grinned, already seeing the way to win. All he had to do was unsettle her.
So he let his gaze drop to her breasts. Alea’s were firm, the perfect size, and under his steady gaze, the nipples perked up. “Your rack is just fine,” he said slowly, letting just enough of his lust through to roughen his voice.
Then he got the pleasure of seeing her blush. Anyone else might have thought it was from the scotch, but now he knew she hadn’t been slamming back booze. That meant her reaction was all for him.
He grabbed his stick and stroked it. Not obviously. Just enough and at just the right moment. He caught her gaze, slid his thumb slowly down the pole, and then winked. She arched a brow, letting him know with a roll of her eyes that more than one man had tried that on her. But all he had to do was glance at her pert tits to know she wasn’t as blasé as she pretended. And with that thought bolstering his ego, he leaned over and shot.
Damn, he was rusty. Who screwed up a break? Him. Not a single ball dropped. Worse, he’d just given her about ten easy shots.
She chuckled as she sauntered around the table, her swagger practically screaming “sucker.” “Looks like your hype is a little overinflated.”
“Maybe. And maybe I like it slow and thorough.”
“Sometimes slow is just boring.” Then she set down her stick, leaned over enough to give him a full view of her gorgeous ass, and shot. Perfect. Her ass, not her shot. The ball actually spun a little wide, but it still made it in.
“Careful,” he said. “Looks like you’re heavy-handed on the stick.”
“Some guys like it firm,” she said as she moved around the table.
“And sometimes thrust is powerful enough.”
She shot him a surprised look. Really? If she thought to trade stick double-entendres, she was far outclassed. He worked on a military base.
“Let’s just see who comes out on top, shall we?” Then she sank another ball. And another. And another.
Fuck, this game was going to end much too fast. And while he was still trying to think of some way to throw her, she slipped behind him as she moved around the table. She didn’t exactly rub up against him, but with their overpacked audience, she had no choice but to touch him. And as her arm hit his shoulder and her hip connected with his butt, her scent slid into his soul. Hot woman, slight citrus, and the bizarrest hint of lavender. God knew how he recognized that scent, but he did. And it meant ALEA to him in all caps. His rock-hard dick started to throb. If she touched him again, he might just explode.


“You’re not going to end up on top,” he said through a clenched jaw. “At least not the first time.”