By Cheryl Brooks June 23, 2014
I didn't make it to RT this year, but I did attend Lori Foster's Reader and Author Get Together in Cincinnati earlier this month. If you've never been, I highly recommend you put it on your calendar for next June. Space is limited, so you have to be ready to sign up as soon as registration opens, but it's worth it for the chance to mingle with authors and readers alike in a relaxed, comfortable, fun atmosphere. This was my fourth year, and I had a fabulous time seeing old friends and meeting new ones. The event raised over $17,000 to benefit One Way Farm this year, which means a lot of dedicated readers were buying an amazing number of raffle tickets.

This was my first time putting together a gift basket, and I had a hard time figuring out a way to cram in all of my books plus a few other goodies. I spent ages in Michael's craft store picking out ribbons and bags and a nifty little butterfly pin that I was afraid might get lost, but I thought the finished result was quite pretty. Thanks to fifteen books and a bottle of wine, it was also very heavy! 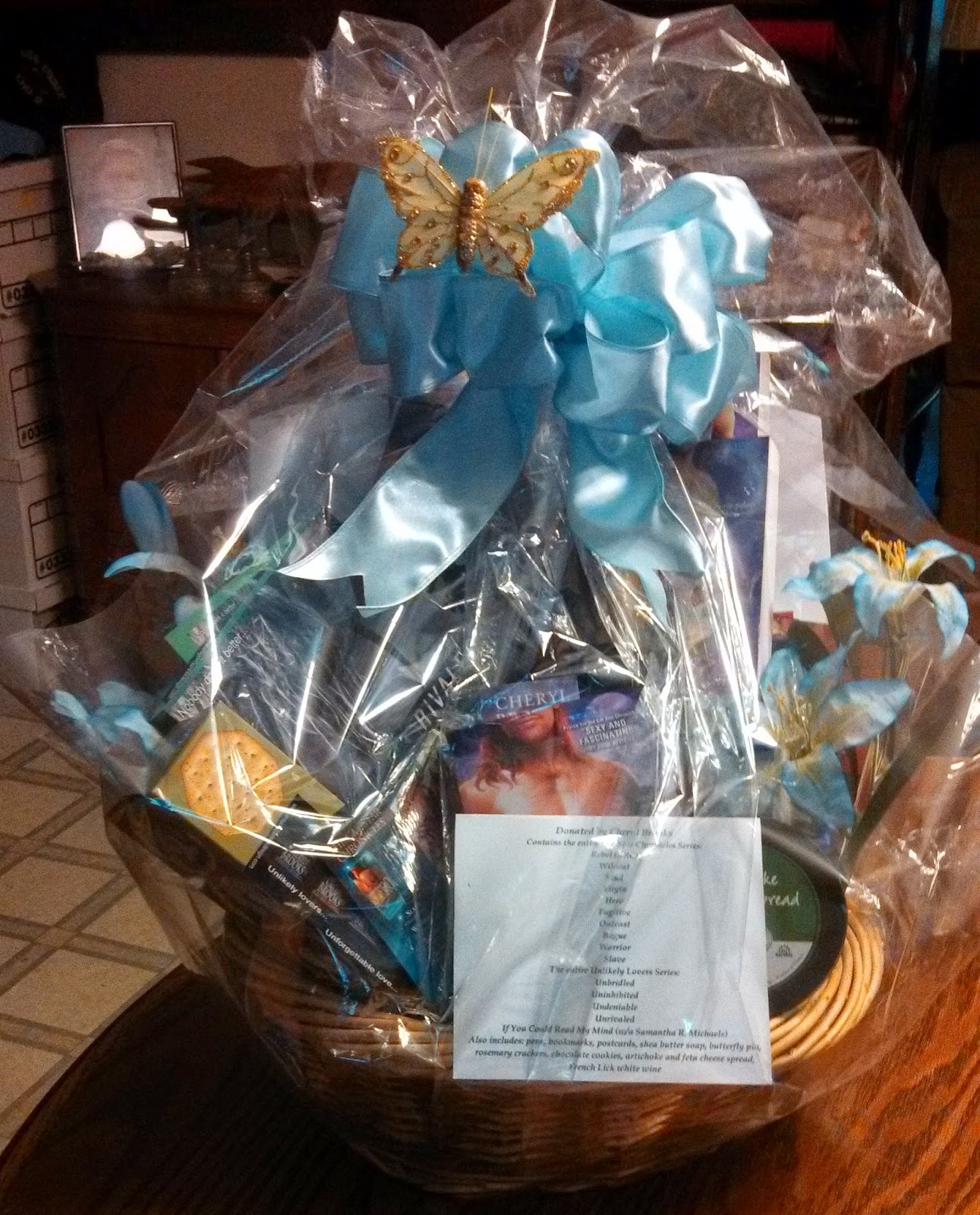 I thought I was being so cool by including an ARC of Rebel front and center in the basket. That is, until I went into the onsite Barnes & Noble bookstore to make sure the books I'd ordered were there. This is what I found! 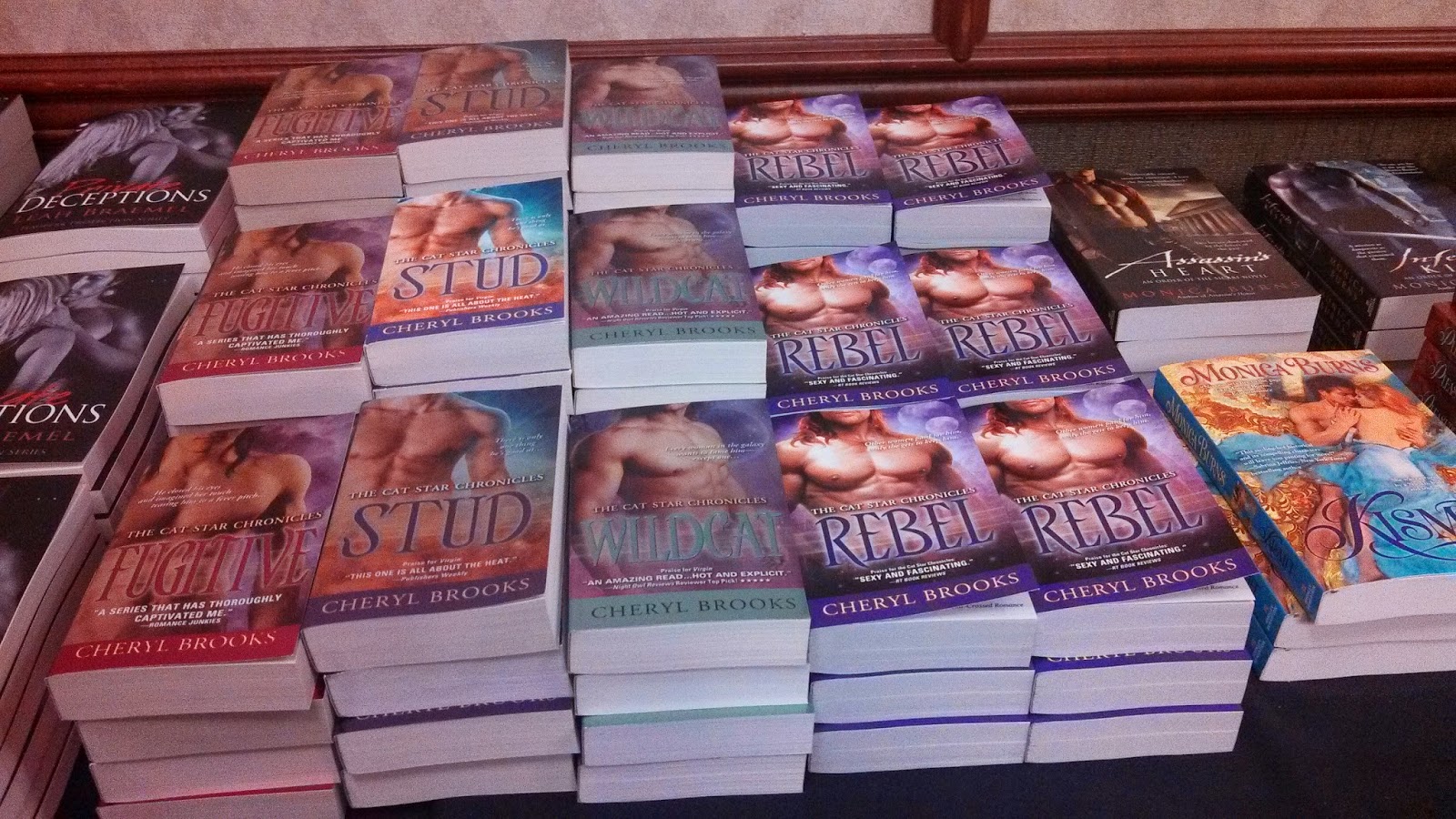 At the time, Rebel's release date was a month away, and my "Holy shit! How did you get those? I don't even have them yet!" comment made the bookseller's day. She had somehow managed to get her hands on thirty copies, even before I received my author's copies, which I still don't have. I was very happy with the number of sales. By the end of the event, there were only six left, and I bought them myself!

Since I've been working on a romantic suspense novel with an Indian hero, I was excited to see this historical fashion show so I could learn how to put on a sari. The costumes were all beautifully handmade, and some were even stitched by hand. 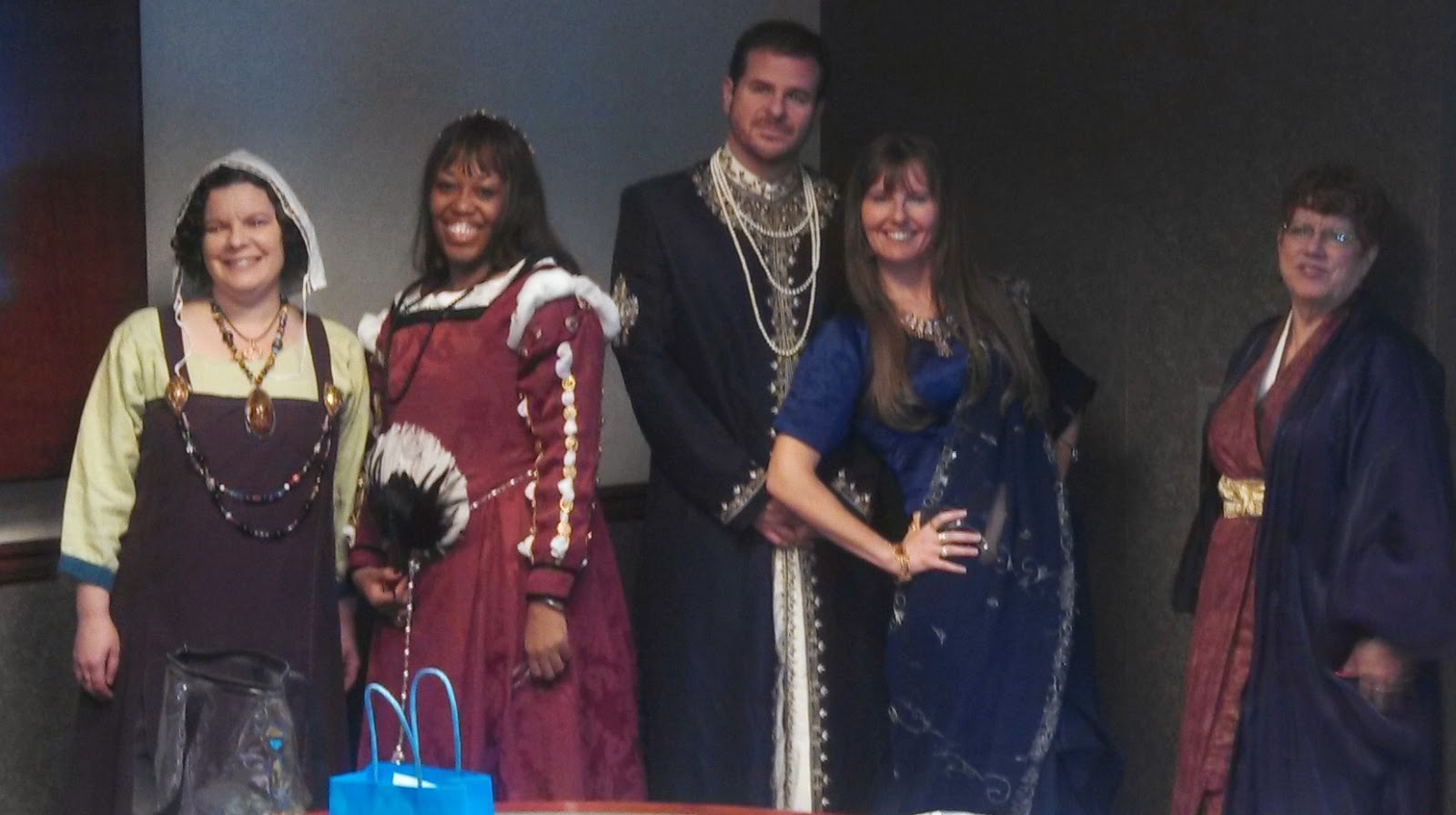 The signing went better than usual. I signed several copies of Rebel, and I even sold out of the print copies of my indie-pubbed Unlikely Lovers series, which surprised the heck out of me. Granted, I was selling them at cost, and you could get all four for $20, but still, I was pleased. I was also sitting beside a debut author who thought it was so cool to be seated next to Cheryl Brooks. That was definitely a first! 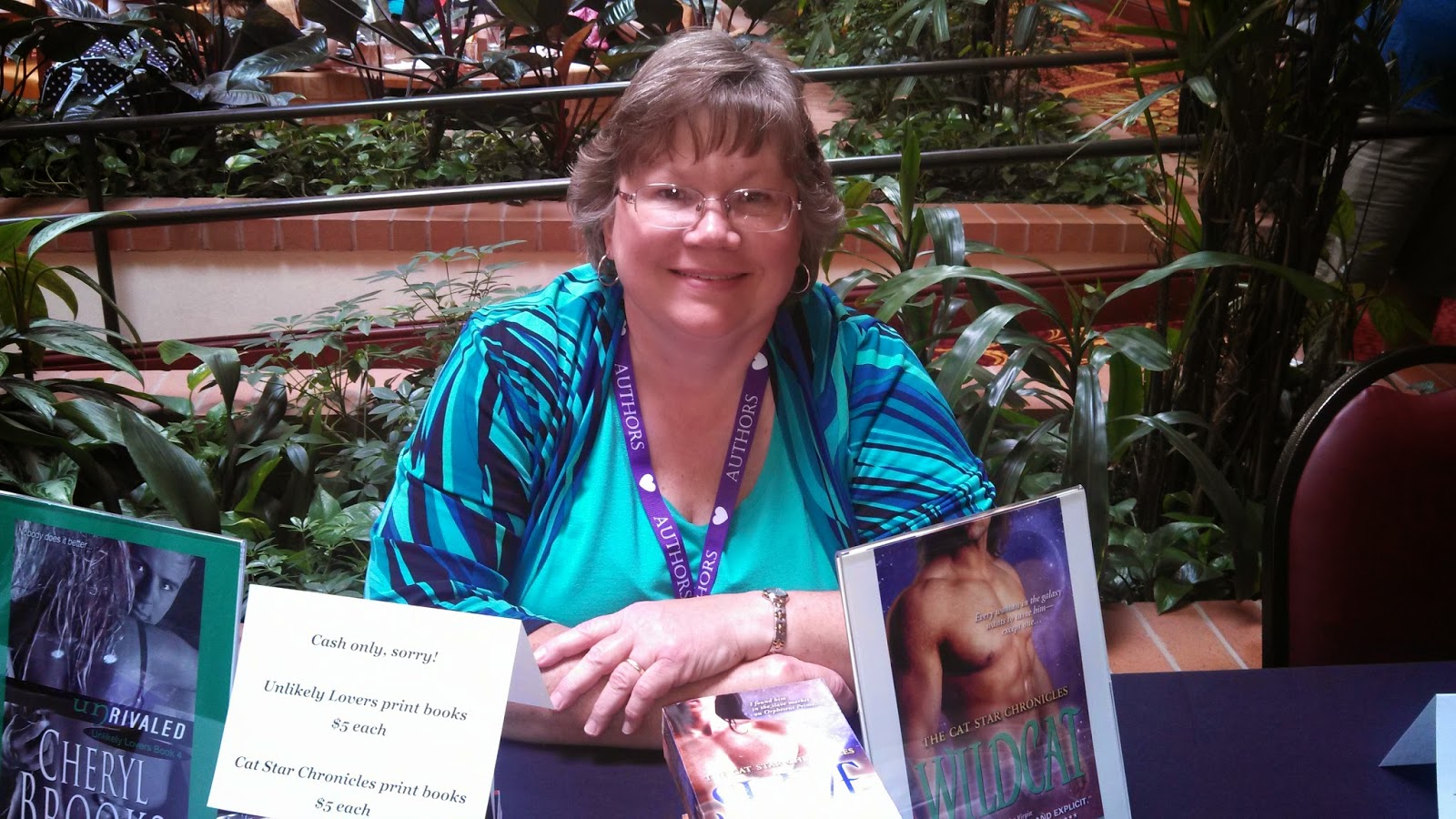 During the signing some of my buddies came over and provided me with a screaming fan girl moment. Wish I'd gotten a picture when they were jumping up and down and cheering, but I was laughing too hard! 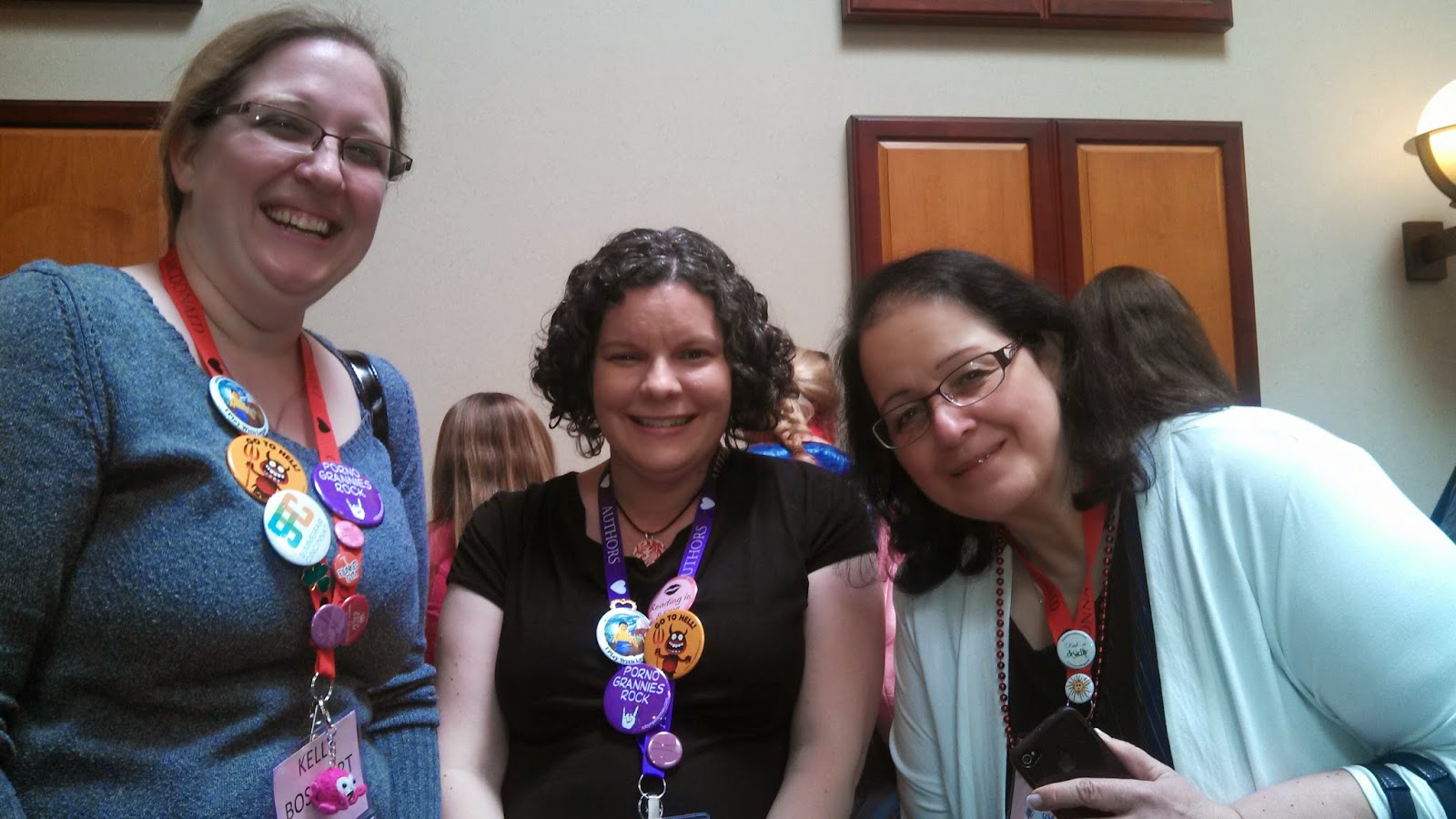 Of the 250 or so baskets in the raffle, mine was one of the last to be given away on Saturday night. By that time, my phone was dead, so I couldn't get a picture of the winner.

Fortunately, someone else took a picture and I was able to snag it from Facebook. Doesn't she look happy? 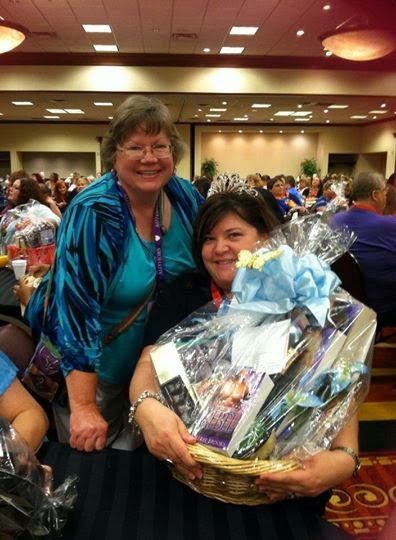 For once, I remembered to get my goodie bag signed by the authors. I strolled around the indie signing on Friday, got quite a few signatures, gathered more swag, and bought some books. Then I had one of my friends take the bag around during the traditional pubbed signing on Saturday, and she got everyone to sign it, including Lori Foster herself! You wouldn't believe how long it took me to set all this stuff up and get a decent picture. There are several books in there, along with some pretty nifty gadgets and my last ARC of Rebel.

And now, I'm giving it all away! Post a comment below for your chance to win big! You get bonus points for liking my Facebook Author page and signing up for my mailing list (you can find the signup form by clicking one of the links below). Please include your email address so I can contact the winner.


Due to the size and weight of this package,
the contest is limited to USA addresses only.