What does Christmas mean for me? Along with family, friends, celebrations and sweltering summers, there's also far too much baking and food. Baking is one of the few hobbies I really enjoy outside of writing, and when it comes to this time of the year, all of our family functions revolve around feasts.

But Christmas in Australia is a little different from that of the Northern Hemisphere. For one thing, it's not unusual to sweat our way through +40 degrees Celsius on Christmas Day, which makes the traditional turkey roast sometimes impossible. Seafood is commonly found on the table, but it's what comes after lunch that always catches my attention. Dessert.

This year, I thought I'd try a few different takes on the traditional fare. Two desserts that are strongly Australian are the Trifle and the Pavlova (whipped egg whites mixed with sugar and baked, which creates a light fluffy cake, upon which we pour fruit, passionfruit syrup, raspberry sauce... pretty much anything you want). I didn't make a 'pav' this year, but I thought I'd attempt a slightly different version of a trifle. This was really easy and delicious! The recipe is here, though I corrupted it a bit. 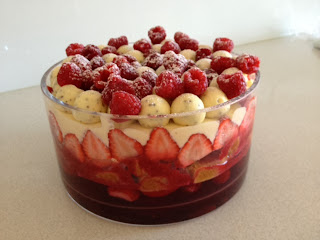 It's basically a layer of:
Then refrigerate for a few hours and let the magic begin (this is the important step as it all needs time to soak). 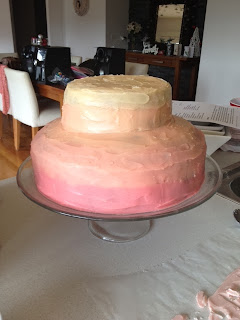 But the piece de resistance is the cake I spent hours making for my little sister's 18th birthday party the weekend before Christmas. I'm not quite sure how I ended up becoming official cake-maker for my sister's birthdays, but, not having kids myself, its the next best thing.

It's the first time I've attempted chocolate curls (as you can see, they ended up more like chocolate flowers, but 'oh well'.) It's also my first time trying to work an ombre effect into the icing. It took four different pots of chocolate ganache (melted white chocolate and cream - awesome icing!), dyed alternating levels of pinkness, a lot of patience and about three hours work all up, to ice and finish the cake. 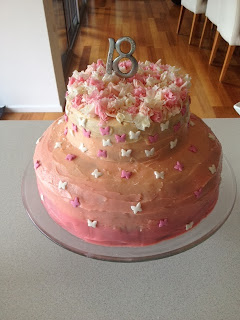 The white chocolate mud cake recipe is here, if anyone is interested and I highly recommend it. Was an amazing recipe for a function cake, and all I did was double the batter to get two tiers.

For any amateur bakers, I'll admit it wasn't as hard as I thought, and this is the first time I've had any reasonable success with a birthday cake - they never quite turn out as planned!

So what are your favourite recipes for this time of year? I'm always interested in finding something new to make and I love attempting something from another culture.

He will find her no matter what. As a blue-blooded captain of the Nighthawk Guard, Sir Jasper Lynch's senses are keener than most. Some think he’s indestructible. But once he finds the elusive Mercury, what will he do with her?