The Call is only the beginning...

Earlier this week, Ashlyn Chase talked about the secret to getting published. Unfortunately, getting "The Call" is only the first step in the long road to seeing your book on the shelf.

I accepted the offer for Cat Star #10, Rascal, last July. I'd submitted the proposal, which consisted of two chapters and a bare-bones synopsis. Then I wrote the book. I sent the finished manuscript to my editor on the March 1, 2013 deadline. Near the end of March, I was asked for the launch materials, which include a fifty word positioning statement, a 250 word synopsis, a full synopsis of 2500 words or less, my biography, and character descriptions. I sent those back near the beginning of April.

Didn't hear much until near the end of April when I was told the title had been changed to Renegade and the book would be released in July 2014. Apparently they wanted something more "alpha male-sounding" than Rascal.

Some of you may recall that Renegade was the original title of Cat Star #7, Virgin. I think the main reason they didn't want Renegade as the title was because it wouldn't fit on the cover in the same font as the other books. Not sure why it was okay for book 10 and not book 7, but I don't get to sit in on those discussions.

I objected to that title change, but to reopen the titling process, I had to come up with ten new suggestions. I sent a list of eleven titles, of which Rebel was my first choice.

Didn't hear a thing until I got my bookmarks for RWA Nationals in July, which had the title (Rebel) and release date (July 2014) on them. I received the first round of edits near the end of August. I've been working on them since then and will be turning them in on November 1st.

In early September, I received the first version of the cover. I loved it! 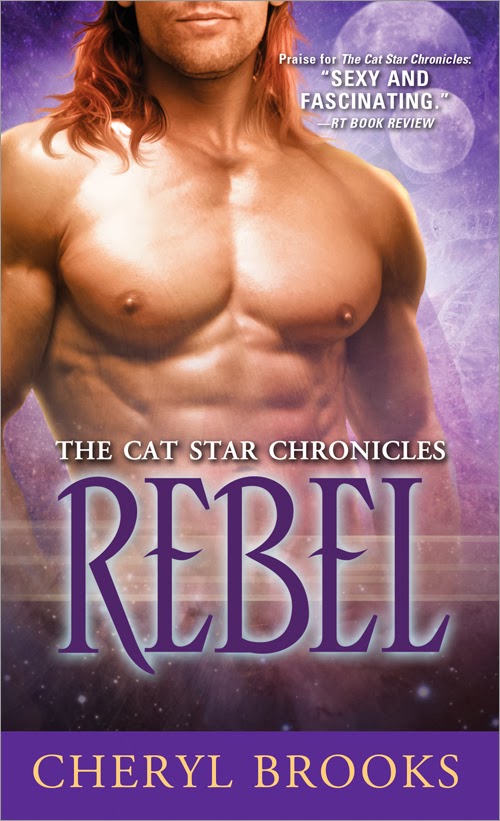 Then it was decided that the title would be more eye-catching spelled out in fuchsia. Aside from the fact that fuchsia isn't a particularly masculine color, I thought it clashed with Onca's hair, so I, um, fussed. Then I was given the option of choosing between the two previous versions plus one that was more of a royal blue.

Guess which one I went with.

Once the edits are turned in and my editor approves them, the manuscript will go to the copyeditor. The copyedited version will then be sent to me to read through and edit. After that, the manuscript will be formatted into the mass market-sized pages, and I'll receive a PDF of it, which is known as a galley. This is the version that is printed in the advance copies (ARCs) that are sent out to reviewers. The galley is then sent to a proofreader, and then it comes back to me. I'll read through the galley and make corrections, after which it goes to another proofreader. Then in late June, I'll receive my author copies and the book will go on sale, probably on the first Tuesday in July.

*sigh* Is it any wonder authors can't always tell you how many books they've written?