Only the Best by Shana Galen


Have you ever watched that channel that shows nothing but movie trailers? Sometimes I catch my husband watching it between sporting events. It’s so funny to see trailers for movies five or even ten years old. The thing I love about trailers are that they tend to pull some of the best parts of the movie to reel us into wanting to see it. I thought I’d try that with this blog. I’ll show you my favorite lines from five chapters of The Spy Wore Blue: A Lord and Lady Spy novella and reel you in! And in breaking news, THE SPY WORE BLUE is only 99 cents right now. That's a matinee price! 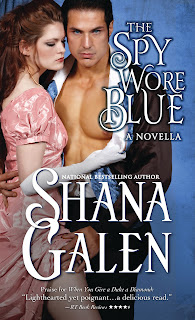 Chapter One
But something went wrong. A sound startled her or the wind knocked her cloak in front of her eyes, and the pistol went off before she was ready. She swore, watching as the man fled. She was usually a much better shot. She did not know how she could have missed him. Blue would certainly have some criticism or other. But when she looked for him, he was gone. She heard a moan and looked down, then gasped when she saw Blue in a dark heap on the scarlet-stained snow.

Chapter Two
She’d really shot him, and bloody hell but it hurt. Blue had always thought Helena would be the death of him, but he thought she would hit him over the head with a wine bottle or stab him in the back. This—this—felt like a betrayal

Chapter Three
He was looking about her room, studying it, seeing God knew what in every little crevice. He turned, and she studied his broad back and slim waist. While her mind screamed that he was dangerous to her, her body screamed desire. Her lips tingled as she imagined tracing a light path down that muscled back with her mouth and tongue. She clutched the arm of the chair and made herself focus.

Chapter Four
And then his mouth was on hers, and it was as though the spark from a fire had leapt onto dry hay and ignited. Her whole body roared to life, consumed by heat and yearning and voracious desire. She dug her hands into his hair and pulled his mouth hard against hers. She felt as though she would die if he didn’t kiss her deeply, thoroughly, completely.

Chapter Five
Blue was never hasty. Never impulsive.
Except once.
He looked at Helena now, studying her furrowed brow as they sat over steaming bowls of soup at her table. He didn’t like that she was a target any more than she liked it, and judging from the worried look on her face, she hated her new position.

Which line is your favorite? One person who comments will win a copy of either Lord and Lady Spy or the upcoming True Spies. Winner’s choice! 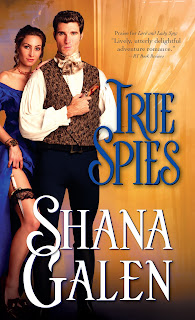