By Victoria Roberts June 25, 2013
I'll admit that I do spin tales of fiction, but there is no way I could possibly make this up.

The clan and I recently returned from a family vacation in Colorado Springs, CO. For those of you who have never seen this beautiful state, place it on your bucket list! 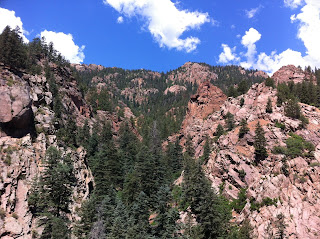 As our flight traveled from Denver to Colorado Springs, we saw the raging forest fire below that destroyed thousands of acres in the Black Forest. Yep, you guessed it. The fires were in Colorado Springs.

Being from Pennsylvania, this type of natural behavior is not something that we're readily accustomed to and frankly, we were more than a little nervous. We said a silent prayer the fire wouldn't impact our vacation and it didn't, but our hearts certainly went out to the five hundred families who lost their homes. We were somewhat surprised that Colorado natives continued to go about their business as if the fires were a common occurrence. I guess they were. I suppose California natives act the same way about earthquakes.

Our travels took us to Garden of the Gods in which the name spoke for itself. 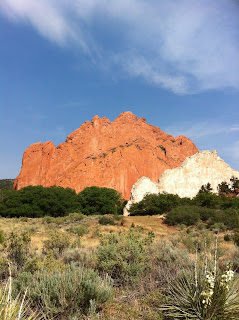 ﻿
We also chuckled when we spotted the sign below since the signs in PA normally mention to clean up after your pet. lol 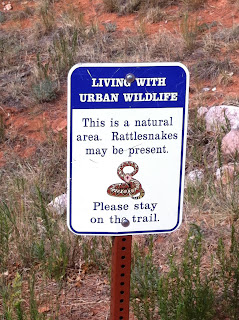 We took the cog train up to the very top of Pikes Peak. Yep, all 14,115 feet above sea level. They even sold oxygen at the train station. 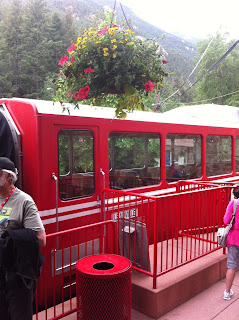 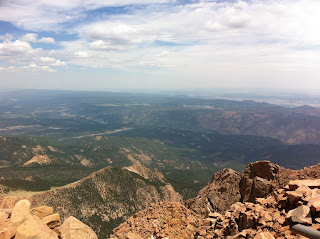 That night, when we arrived back at the hotel, one of the hotel staff had asked me what we did that day. I told her that we had a great time taking the cog train up to Pikes Peak and a strange look crossed her face. She said, "Oh, please tell me your train was not the one that got struck by lightning today."
Thankfully, the Roberts family had managed to avoid the fires and did not get struck by lightning.
On another day, we traveled to the Cheyenne Mountain Zoo and we still hadn't had any rain. The sun was shining, there was a cool breeze in the air, a great day for visiting the zoo. 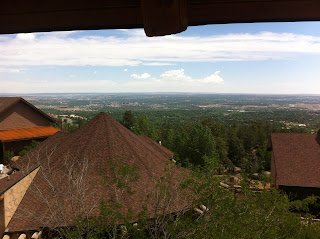 Yeah, well, let me tell you that mountain weather is totally unpredictable. Within minutes, rain, thunder, and it poured buckets! At least we saw most of the zoo. 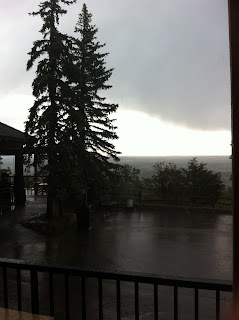 We were stuck under a small roof for over a half an hour, but we were so thankful because we knew the rain would help the Colorado firefighters. As soon as the rain had quit pelting us, we made a mad dash to the car. Imagine our surprise when a huge crowd stood at the entrance to the zoo for tickets in the rain. I turned to my husband and asked him if they were nuts. We get in the car, I back out, and guess what folks? You got it. The clouds parted, the rain stopped, and the sun was blinding. Grrr...

During our vacation, I even managed to swing by two Barnes and Noble bookstores and both stores were sold out of X Marks the Scot. Woot! So I signed stock of Temptation in a Kilt. I found myself in the romance section in both stores and turned out the covers of my Sourcebooks sisters and "rearranged" them in a prime location.
When we arrived back at the hotel that night, we found out a tornado touched down at the Denver airport. Seriously. I didn't think Colorado was that dangerous.
The highlight of our vacation had to be the wolves. Yep, you heard me right. Wolves. Did you hear me, Terry Spear? My daughter has been forever fascinated with all-things wolves. Imagine her surprise when her awesome mother paid for her to get her picture taken with a wolf pup.
Priceless... 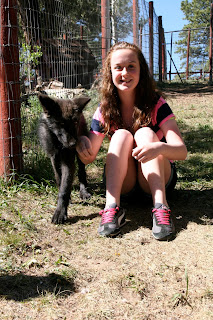 Through thunder, lightning, forest fires and a tornado, emerged a wonderful family vacation that I know we will always hold dear.
What about you? What is the best family vacation you have ever taken? 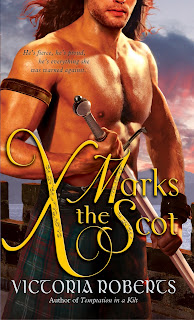 Victoria Roberts writes Scottish historical romances about kilted heroes and warriors from the past. She was named by RT Book Reviews as "one of the most promising debut authors across the genres" and was also a 2012 Reviewers Choice nominee for Best First Historical for TEMPATION IN A KILT.
X MARKS THE SCOT (Bad Boys of the Highlands #2) was awarded a TOP PICK from Night Owl Reviews, and TO WED A WICKED HIGHLANDER (Bad Boys of the Highlands #3) is scheduled for release September 3, 2013. The first of Victoria's new Royal Rebellion series is scheduled for release fall 2014.