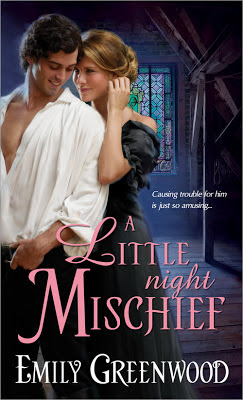 Thanks so much to my fellow Casablanca authors for having me here today to celebrate the release of my debut, A Little Night Mischief.  I’m terrible at celebrating things—I wanted to hide at my own wedding—but this is so much more fun than putting on a long dress in 103-degree heat and having everyone I know looking at me at the same time.

I like to think of what I write as Regency romantic comedy. A Little Night Mischief , which finaled in the Golden Heart a few years ago under a different name, is the first in my Mischief trilogy.

Here’s the story in a nutshell: Felicity, the heroine, has been happily running her family estate for the last few years, so when her deadbeat uncle gambles it away to a handsome rogue, she’s not going to surrender it without a fight. But James, the new owner, has plans of his own for the estate, and there’s no way he’s going to give up his claim. The battle is on!

A few fun things about my debut:

* Felicity’s family home, Tethering, is a kooky old manor house. I love old houses, the more unusual the better, and Tethering has got quite a few quirks. From the old apple orchard behind it to the unexpected turrets atop its modest exterior and the secret passageways hidden in its walls, it’s not quite like any other house in England— which is part of why Felicity loves it so much.

* My hero, James, is one of those guys who hates to be idle. And he’s got a really good reason to be busy when the story starts, because he has only a little time left in which to pay off a huge family debt. He thinks Felicity’s estate is going to be the very thing to help him succeed. James is very driven toward winning and success—he even keeps a to-do list—so maybe he’s not going to be the easiest man for Felicity to tangle with :-)


* One of James’s other efforts to generate money to pay the family debt involves a crumbling sherry vineyard in Spain. Interestingly, the sherry we often read about people drinking in Regency novels was generally sweetened for the English palate. The Spanish preferred “fino,” which is a dry (meaning not sweet), pale sherry.

* And finally, I could be wrong, but I think A Little Night Mischief is the only current romance release with a fake ghost. :-) You just know there are going to be some midnight adventures in those secret passageways!

So that’s a bit about my debut. Thanks so much for helping me celebrate!

Thanks to Emily for visiting with us today! To enter to win one of two copies of A Little Night Mischief, please leave a question for Emily in the comments. Winners will be announced in the comments on Friday, June 14.
Please be sure to leave an email address so we can contact you (US and Canada mailing addresses only).

A LITTLE NIGHT MISCHIEF BY EMILY GREENWOOD – IN STORES JUNE 2013
Every Prize Comes with Complications... 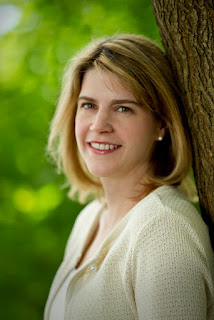 A game of chance saves James Collington from the prospect of debtors' prison, and grants him ownership to Tethering estate. Little does he know that his winnings come with serious complications--not least of which is a beautiful but impoverished young lady who insists his new manor belongs to her.

If He Can't Stop Her, He Might as Well Join Her...

Felicity Wilcox is determined to run Mr. Collington off her land, Though James's charm and devilish good looks are a serious distraction. What she doesn't know is that she may be haunting him right back.

ABOUT THE AUTHOR
Emily Greenwood worked for a number of years as a writer, crafting newsletters and fundraising brochures, but she far prefers writing playful love stories set in Regency England, and she thinks romance is the chocolate—and in some exquisite cases, the wine—of literature. A Golden Heart finalist, she lives with her husband and their two daughters in Maryland. For more information, please visit http://emilygreenwood.net/.