Last year I set myself a challenge. I've always written full-length novels and I find it no problem to write 100,000 words. But late last year I decided to write a little novella spin-off in my London Steampunk series, as a Christmas gift to my readers and as a little something to tide them over in the intervening months between Kiss of Steel's release in September and the upcoming release of Heart of Iron (May).

This is easier said than done.

Writing a novella is so much fun - but completely different to writing full-length. I love weaving complex plots together but in a novella you can't do that. There's limited word space, so everything has to be tight, focused and based on one plot element. And the challenge of creating a complete romance in 35,000 words? Complete with the smexy scenes, fully fleshed back stories and emotional character arc? Hoo-boy.

That's how Tarnished Knight came into being.

Of course, it helped that this particular couple just wouldn't leave me alone. Rip and Esme were secondary characters from Kiss of Steel, both loyal to their master, Blade, and living beneath the same roof. At the end of Kiss of Steel, Rip had just contracted the craving virus that turns a man into a blue blood - and forces him to survive on blood alone - and Esme was devastated at how close she'd come to losing her best friend and the man she secretly loves. There was a story there, lurking beneath their tense exchanges and stolen glances, and it haunted me until I wrote it. 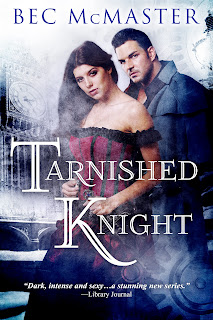 So I'm pleased to present to you Tarnished Knight, a sexy little read about a scarred man who's afraid to be close to the one woman who drives him beyond all control and Esme, who refuses to let him go. It's got a friends-to-lovers theme and best of all it's available for free download for a limited time. The perfect way to get a sneak peek at my London Steampunk series!

In the steam-fuelled world of Victorian London, vampires, werewolves and slasher gangs stalk the night and a man made partly of metal is about to discover just how far he’ll go to protect the woman he loves…

After a vicious vampire attack left him struggling to leash the dark urges of the craving virus, John ‘Rip’ Doolan, thinks he’s finally starting to master the darkness within. The only thing that threatens to shatter his hard-won control is Esme, his closest friend and the only woman he’s ever wanted. If the stubborn beauty ever realized precisely what was going through his mind, their friendship would be ruined…

For six months Esme has waited for Rip to recover and take her as his thrall, not daring to hope for more. Too afraid to put her heart on the line, she is devastated when Rip reveals that he never had any intentions of making her his.

But when a savage gang of Slashers start causing havoc in Whitechapel, Rip and Esme have no choice. They must face up to the depth of the passion that burns between them and forge a new relationship… or risk losing each other forever.

Here's a little excerpt in which our hero has refused to take Esme as his thrall and is getting his blood from other sources. Let's just say she's not very happy about it, and he's not quite sure why:

Want to see what the London Steampunk world is all about? Tarnished Knight is available as a free downloadable ebook for a limited time at http://www.becmcmaster.com/books/tarnished-knight/#more-404

Also, keep an eye out for Heart of Iron, which is due out in May 2013. Featuring one mighty stubborn verwulfen hero with a brutal past and a flirtatious heroine who's about to twist him around her little finger, it's full of explosive action and steamy interludes... 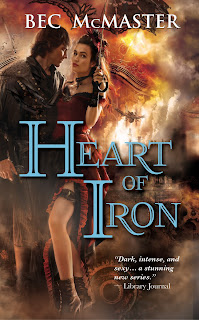 I'd love to know what you think about novellas. Perfect for an afternoon read, or preferable over something full-length? If you're a writer, have you ever tried your hand at one? Easier or more difficult to write than a full-length novel?