By Gina Lamm April 20, 2013
When I was a kid, my big sister and I didn't get along. I mean, AT ALL. To the extent that it's kind of a miracle that we both reached adulthood.

We had a lot in common, but for some reason we chose to ignore that. Neither of us wanted to be ANYTHING like the other one. My sister was musical, smart (better grades than me) and computer-savvy. I was loud, boy crazy, and into depressing poetry.

My poor sister got the "honor" (read-incredibly miserable task) of chaperoning me on a few dates. Needless to say, this was another point of contention in our already-strained relationship. We're pretty close in age, only 23 months apart. She had much more interest in going to college and making a career for herself than chasing after boys, something I scoffed at then. Of course, I know how stupid I was now, but hey, we all learn as we grow, right? 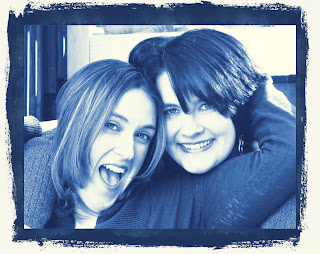 When I was a teenager, I remember having some kind of stupid argument with my sister. I was complaining to my Nana about her, how she didn't understand me at all. My Nana just smiled at me, and told me about the time when she and her sister were young.

They'd get into fights, scream at one another. My great-aunt Maddy would sit on my Nana's back and pull her hair as hard as she could. They hated one another, so much that it seemed impossible that they'd let each other survive until adulthood.

Until they grew up. And then? Somehow they became best friends. And my Nana swore that my sister and I would have the same thing happen to us.

I laughed at it then. MY sister? No way. She'd never like me, and the feeling was quite mutual, thank you very much.

But then, know what? Something weird happened.

She grew up. And I wasn't far behind. And somehow, we found ourselves spending more time together. On purpose, even. Without being forced to. And then we started going to one another for advice. A shoulder to cry on. Sending lols, and sharing movies, and generally behaving civilly, to the point of actual friendship. More than friendship. Best friendship.

I'm just telling you this story because my sister means a lot to me. Without her, I don't know that I'd do. She's truly my best mate, one of my bestest beta readers, and I love her dearly.

Do you have a friend that's like a sister to you? Or a sister who's your very best friend? Did you HATE each other, like my sis and I did? Let me know in the comments. I like to hear I'm not the only one who barely escaped being murdered in my preteen years :)