By Hot Ash Romance Novels March 22, 2013
My critique partner says, "Don't throw away a scene. You never know when it might be useful." Well, for my latest book, Flirting Under a Full Moon (coming April 2,) a lot of scenes were taken out...but not thrown away. It looks like this one might be useful as a blog!

This is the scene where werewolf Nick meets vampire Anthony.


Anthony ran to the altercation as quickly as humanly possible. Until he knew what kind of creatures of the night these three were, showing his vampiric speed could be dangerous, since paranormals were still in the closet, at least in this part of the world.


He reached them just in time. The big guy clenched his fists and shook as if ready to let loose on the other two. He looked as if he could tear them to shreds with his bare hands, if he wanted to. The street light glinted off metal blades in the other guys’ hands.


Anthony forced his way between them. “Hold on,” he said in a commanding tone.


“It seems to me you could use some assistance.”


The fight seemed to drain out of the smaller two and they stepped back, staring at them.


This was too easy.


Anthony knew his appearance could be intimidating. His black clothing made his pale face appear stark. Still, that was no reason to be feared. He did kind of look like the stereotypical vampire. Longish, shaggy dark hair. Gray steely eyes. He imagined his piercing gaze and intensity was what the humans were reacting to.


Then he realized his fangs had descended. Oops.


The other one didn’t need to be convinced. He turned on his heel and ran. Anthony appeared in front of them and snagged their gazes.


“You will not remember seeing me tonight. You will forget about the confrontation with the other man. Now return to your homes and get a good night’s sleep.”


He watched as they rounded the corner and disappeared from sight.


The big man eyed him warily.


Anthony gave him a sardonic smile. “What? You’re not going to run away and make me mesmerize you too?”


The guy let out a booming laugh. “Since when do werewolves run away from vamps?”


“I see. Since when do werewolves get involved in scuffles with humans?”


“When the werewolf is recognized as the off duty cop who arrested their gang brother earlier this week.”


After briefly sizing up the other guy, Anthony extended the hand of friendship. He didn’t know if the wolf would accept it or not, but he had no beef with him. “I’m Anthony Cross.” To his surprise, the wolf shook his hand without hesitation.


“Pleased to meet you, Officer Wolfensen.”


“I didn’t realize vamps were in this part of the city. It’s pretty popular with tourists and the locals are kind of…”


Nick laughed. “Yeah. That’s one word for it. I was going to say exclusive. They don’t like unsavory elements mucking up their high end area. And if one of them goes missing, believe me, it’s noticed.”


The werewolf leaned back and scrutinized him. “Why do you want to know?”


Nick laughed again. “Naw, we just blend in better—as long as the moon isn’t full. The vamps have a nest near the airport. I’m guessing you’re new in town or you’d probably know that.”


“I’m not interested in nesting with other vampires. Group mentality brings nothing but trouble.”


“But you wolves run in packs. Are you saying that you don’t have one?”


Nick’s expression clouded and he appeared on guard again. “My pack is…in transition.” 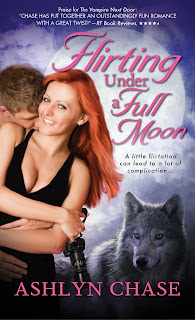 So why was this scene cut? Well, because it took place five years before the beginning of our story. It really wasn't necessary to the story's enjoyment. We know Nick and Anthony became good friends. It doesn't really matter how or when. Fortunately, by cutting it (and a few others) we were able to get to the action sooner and introduce our heroine right away.


Over the din of clinking ice and lively con

Suddenly the place quieted. Heat crept up her neck, and she dropped her BlackBerry into her apron pocket. She was about to slink off to the ladies’ room when Sadie Maven, the owner’s eccentric aunt, waved her over to the booth she regularly occupied.


"Have a seat, dear. Let me do a quick reading for you—on the house." Sadie was already shuffling her tarot cards.


Brandee slumped onto the opposite bench and set down her tray.


"I had a premonition about you just now." Sadie winked. "It might make you feel better."


Sadie spread the cards across the table. "Pick one."


Brandee pulled one card from the middle and turned it over. On it was a picture of a couple entwined in a passionate embrace, and the text beneath proclaimed:

"Ah. I was right. You’ll meet your true love soon. In fact, he could be the next man to walk through that door."
Psychic Sadie nodded toward Boston Uncommon’s Charles Street entrance.


Brandee gazed at the door expectantly. It swung open and a tall, blond, broad-shouldered hunk of a man breezed in.
Oh no. It couldn’t be.

"One-Night Nick? Are you kidding me?" She burst out laughing.


Brandee picked up her tray and returned to work, still chuckling and shaking her head.


"What put that smile on your face, beautiful? Besides seeing me, of course." Nick Wolfensen grabbed a stool and sat on it backward. Even with the stool’s height, his big feet hit the floor. His powerful thighs bulged under his blue jeans. That wasn’t the only bulge she thought she saw.


Brandee knew her regulars and Nick was a good tipper. She’d play nice, even though Sadie’s omen sat uncomfortably in the back of her mind. "Just something Sadie said. I think I’ve served her one too many White Russians."

I hope you'll pick up a copy of Flirting Under a Full Moon if you don't win one of the many copies going out during my big blog tour. You can check my news blog for the schedule of where I'll be.
http://ashlynchase.blogspot.com/
The madness starts in late March and goes through the entire month of April. How do you feel about blog tours?