When I moved to Texas last July, I knew that my winters wouldn't really be winters anymore--not by a Midwesterner's standards. Last winter, I still lived in Nebraska and this is the kind of thing I dealt with for several long, depressing months. 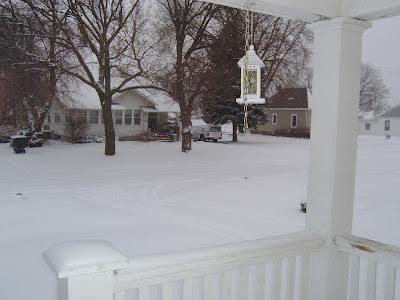 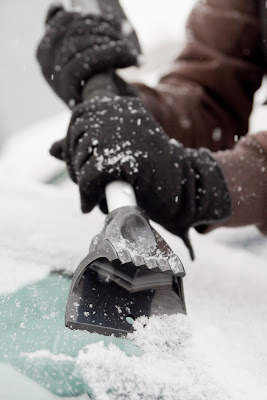 Driving was an icy, slick nightmare for three months. I had to dress in layers. I was always, always cold. And as someone who suffers from Seasonal Affective Disorder, I would spend months trapped indoors feeling, well, sad. I even owned one of those fancy blue lights and sat in front of it for half an hour a day. It helped. A little. But it didn't do anything for my constant state of cold.

I hate winter. I never understood the appeal of snow. To me, snow means a lot of back-breaking shoveling and dangerous driving conditions. Apparently, some people think it's pretty. It does cover the ugly dead landscape of winter. I'll give it that.

Each winter, I get at least one really horrible cold. And most winters, I get two. I never really thought about why we call them colds. I guess because they are more common in the winter, when it is cold. (Aren't you amazed by my powers of perception?) I didn't get a cold this year. Not even a slight one. This is particularly unusual because I'm in a new environment, which means I'm not immune to the germs here. Usually when I move to a new state, I get sick more often than usual. Apparently, the salty, humid air kicks germ-arse. Rock on, salty sea air!

I soon discovered that I love taking walks on the beach in JANUARY. And instead of stomping snow off my boots before I enter the house, I'm stomping off the sand from my shoes. It's the most awesome thing EVAH! This is photo of Galveston's Pleasure Pier. Sounds a lot more risque than it is! And I didn't visit it this winter, though I could have. It was open on weekends. I did walk under it regularly on my beach strolls, however. 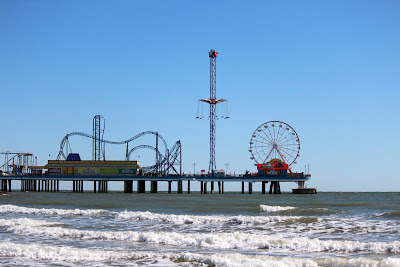 When I told my Midwestern friends and family that I'd had enough of winter and I was moving south, they told me how much I'd miss winter. They said wise things like, "Christmas doesn't feel like Christmas unless it's cold." So I went home to visit my family in the Midwest for Christmas. And guess what? It snowed as soon as I arrived. Seriously. I hadn't been there an hour when it started snowing. Everyone was like, "Hooray, a white Christmas! Aren't you glad you got to see snow this winter?" No! It reminded me why I hate winter. I was so glad to get back to Texas. I do miss my Midwestern friends and family (greatest people on Earth, in my opinion), but I do not miss winter. At all. I keep trying to lure them south. I think they're were starting to take a shine to the idea after they received twelve inches of snow a few weeks ago and then another twelve inches only days later. How you liking that pretty white stuff now? I texted my sister from my lounge chair on the beach. I accompanied the text with a picture of the surf. Yes, I'm evil.

There is one small thing that I do miss about winter. I can't look forward to spring. I remember how excited I would get when the freaking snow finally melted and the first spring flowers emerged from the cold ground. Tulips. Daffodils. Crocus. Hyacinth. I loved seeing their bright blooms rising above the dead foliage of winter. And the grass would turn green. The trees would start to leaf out. It was the best time of the year. Life reemerging after the cold, still death of the winter months. 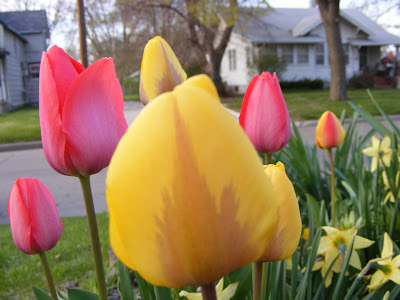 So for about ten minutes, I was a bit depressed that I wasn't in Midwest enjoying the vibrant spring flowers and then I realized, I'd had spring all winter long. The flowers never stopped blooming here. There are a few very confused deciduous trees that lost their leaves for a couple of months, but the landscape was green all winter long. And the palm trees are as pretty as ever.

So the verdict is in. I love having spring all winter. Two seasons--spring and hotter than hell summer--work just fine for me, thank you very much. Those wise friends and family who warned me about how I'd regret the lack of winter were just plain wrong. Sorry, folks. I love you, but not your climate. I now think they gave that advice because they have no idea how great it is to not freeze your tushie off for four months a year. How fabulous it feels to never touch an ice scraper or a snow shovel. How wonderful it is to take a walk in January in the sunshine without a parka, hat, gloves, and scarf. Though Texans wear parkas when it's 45 degrees out. Funniest thing I've ever seen. So no, I really don't mind being woken by seagulls at seven a.m. Having spring all winter is swell.

So how was your winter? Mine rocked! It was one Hot Ticket. (I had to get my plug in there somehow.) 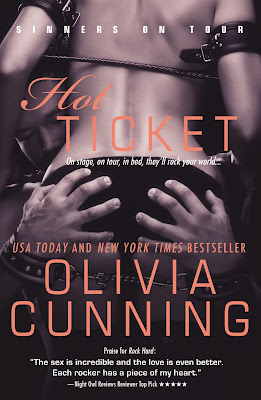