Taking the Dress for a Walk by Mary Wine

By Danielle Jackson Dresser February 27, 2013
Yes, it’s a bit of an odd blog title but the resent Oscars have me thinking about the lengths we often go to when dressing for public events. As a historical writer, I often describe the gowns worn at various royal courts. These dresses were ornate, cumbersome and very often, the key to being noticed. Career courtiers often went into financial crisis just to outfit themselves. Walter Raleigh, one of Elizabeth Tudors favorites was rumored to never be seen in the same outfit twice. Considering there were no sewing machines, this entailed a huge amount of expense. So much so, he was adopted as a full grown man so that someone else might pay his tailor bills. 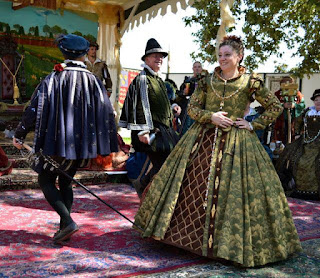 But being noticed was the most important thing. I adore my historical gowns but there is an art to wearing them. To the left is a picture of me dancing in one styled after a painting from 1560. You might notice my hand position. Girls were schooled from very early age on how to appear in public. The dress weights about thirty five pounds and must be kept balanced. Not an easy task when you are dancing or trying to go up stairs. I’ve ended up grateful that I wore knickers a time or two. You can also see the gentleman in blue holding onto his sword pommel. Since we were dancing, men had to pay close attention to their weapons or they would whip around. 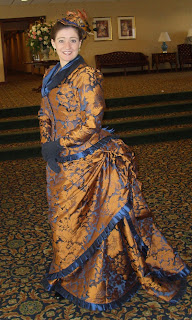 This fascination with extreme fashion continued on through the Victorian era. The bustle at one time, was large enough to support an entire tea service. Ensuring you didn’t look like a dog wagging its tail took a great deal of practice. The idea was to appear like a peacock, graceful and confident. Little ladies-to-be were laced into training corsets which taught them proper posture by age three. Often, a wood slat was attached to the corset and a tie went around the girls head to teach her proper placement of the neck and chin. This is where ‘looking down your nose’ comes from. Girls schooled in this way did not lower their chins. They looked down with their eyes only.

I still enjoy the red carpet walk. Those celebrities put in a lot of work to look that good. I love the sparkle and shine of the Oscars. Next time you want to read a book with a little of that glamor, pick up one of my historical romances!