Happy Valentine’s Day! I thought I'd share some quotes about love from one of our favorite authors, Jane Austen! Be sure to read through to the end, enjoying the passages, and to enter our giveaway!

Sense and Sensibility – when Elinor finds out Edward isn’t married, and she can’t keep her emotions hidden any longer.

Pride and Prejudice – Elizabeth asks Darcy when he first fell in love with her… and corrects him :)
“I cannot fix on the hour, or the spot, or the look, or the words, which laid the foundation. It is too long ago. I was in the middle before I knew that I had begun.'” 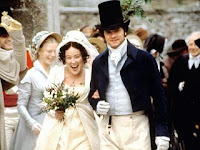 “My beauty you had early withstood, and as for my manners–my behaviour to you was at least always bordering on the uncivil, and I never spoke to you without rather wishing to give you pain than not. Now be sincere; did you admire me for my impertinence?'”

“For the liveliness of your mind, I did.”

“You may as well call it impertinence at once. It was very little less. The fact is, that you were sick of civility, of deference, of officious attention. You were disgusted with the women who were always speaking, and looking, and thinking for your approbation alone. I roused, and interested you, because I was so unlike them. Had you not been really amiable, you would have hated me for it; but in spite of the pains you took to disguise yourself, your feelings were always noble and just; and in your heart, you thoroughly despised the persons who so assiduously courted you. There–I have saved you the trouble of accounting for it; and really, all things considered, I begin to think it perfectly reasonable. To be sure, you knew no actual good of me—but nobody thinks of that when they fall in love.”

Mansfield Park – when Edmund finally realizes Fanny is the only one for him, and perhaps too good for him. 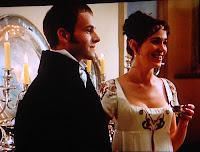 Even in the midst of his late infatuation, he had acknowledged Fanny’s mental superiority. What must be his sense of it now, therefore? She was of course only too good for him; but as nobody minds having what is too good for them, he was very steadily earnest in the pursuit of the blessing, and it was not possible that encouragement from her should be long wanting. Timid, anxious, doubting as she was, it was still impossible that such tenderness as hers should not, at times, hold out the strongest hope of success, though it remained for a later period to tell him the whole delightful and astonishing truth. His happiness in knowing himself to have been so long the beloved of such a heart, must have been great enough to warrant any strength of language in which he could clothe it to her or to himself; it must have been a delightful happiness. But there was happiness elsewhere which no description can reach. Let no one presume to give the feelings of a young woman on receiving the assurance of that affection of which she has scarcely allowed herself to entertain a hope.

Emma – when Mr. Knightley is jealous of Frank Churchill, and Emma doesn’t know why.
“You seem determined to think ill of him.”

“Me! Not at all,” replied Mr. Knightley, rather displeased; “I do not want to think ill of him. I should be as ready to acknowledge his merits as any other man; but I hear of none, except what are merely personal - that he is well-grown and good-looking, with smooth, plausible manners.”
...
“I will say no more about him,” cried Emma – “you turn everything to evil. We are both prejudiced! you against, I for him; and we have no chance of agreeing till he is really here.”

“Prejudiced! I am not prejudiced!”

“But I am very much, and without being at all ashamed of it. My love for Mr. and Mrs. Weston gives me a decided prejudice in his favor.”

“He is a person I never think of from one month’s end to another,” said Mr. Knightley, with a degree of vexation, which made Emma immediately talk of something else, though she could not comprehend why he should be angry.

Northanger Abbey – when Henry talks about Catherine’s brother’s relationship, only he’s really kind of outlining what he wants for theirs. 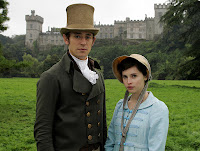 “My dear Miss Morland,” said Henry, “in this amiable solicitude for your brother’s comfort, may you not be a little mistaken? Are you not carried a little too far? Would he thank you, either on his own account or Miss Thorpe’s, for supposing that her affection, or at least her good behaviour, is only to be secured by her seeing nothing of Captain Tilney? Is he safe only in solitude? Or is her heart constant to him only when unsolicited by anyone else? He cannot think this — and you may be sure that he would not have you think it. I will not say, ‘Do not be uneasy,’ because I know that you are so, at this moment; but be as little uneasy as you can. You have no doubt of the mutual attachment of your brother and your friend; depend upon it, therefore, that real jealousy never can exist between them; depend upon it that no disagreement between them can be of any duration. Their hearts are open to each other, as neither heart can be to you; they know exactly what is required and what can be borne; and you may be certain that one will never tease the other beyond what is known to be pleasant.” 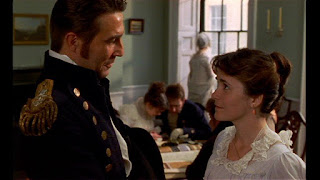 You pierce my soul. I am half agony, half hope. Tell me not that I am too late, that such precious feelings are gone for ever. I offer myself to you again with a heart even more your own than when you almost broke it, eight years and a half ago. Dare not say that man forgets sooner than woman, that his love has an earlier death. I have loved none but you. Unjust I may have been, weak and resentful I have been, but never inconstant. You alone have brought me to Bath. For you alone I think and plan. Have you not seen this? Can you fail to have understood my wishes? I had not waited even these ten days, could I have read your feelings, as I think you must have penetrated mine. I can hardly write. I am every instant hearing something which overpowers me. You sink your voice, but I can distinguish the tones of that voice when they would be lost on others. Too good, too excellent creature! You do us justice, indeed. You do believe that there is true attachment and constancy among men. Believe it to be most fervent, most undeviating, in
F. W.

I have three copies of The Jane Austen Companion to Love (a book of quotations) up for grabs today! Just tell me in the comments who your favorite Austen couple is and why, and you’ll be entered to win. Authors, this one is open to you, too J US and Canada addresses only, and please leave an email address so I can reach you easily. Winners will be announced tomorrow, 2/15!