By Anonymous January 25, 2013
Happy Friday everyone!  If you're somewhere in the northern part of the US or Canada, I hope you're surviving the deep freeze.  It's really cold out there so I've spent most of my time inside doing what I love to do best, reading and writing.

I finished a few projects early in the month and my reward for finishing was a week or so of just reading.  I'd been hearing a lot of chatter from a few blogger friends about THE BRONZE HORSEMAN by Paullina Simons and it was a book that's been on my kindle for over a year. So, I took the plunge.  Wow.  WOW.

The book is the first of a trilogy and revolves around a young Soviet girl and the Red Army soldier she falls in love with. Needless to say as their story unfolds they are given a second chance at love and second chances is one of my favorite romance tropes ever.

I love when characters with a past get the chance to reunite and reconnect and to finally find the love that we are readers, root for.  What is better than that?

In my recently released book COLLIDE, my hero returns to the town he grew up in to try and get his life back.  What he doesn't expect are the sparks between him and the woman who stole his heart years ago. They have to work through stuff to get to their HEA and I think that's what I love about these second chance love stories.  There's a familiarity with the characters and a lot of baggage. 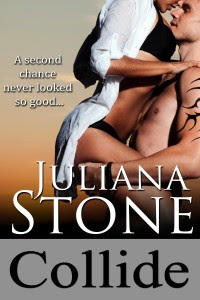 
“Do you have any wine?” she asked in an uncontrolled Monroe kind of voice that came from where?
“You don’t want wine,” he said, his voice low and hitting that timber that rolled over her skin like little fingers of pleasure. It was a statement, not a question.
“No, I don’t want wine.”
Her gaze dropped to his mouth.
“What exactly is it that you want?” he asked dangerously. He spread his legs slightly as he continued to lean against the countertop.
She could play the game. Keep the banter going. The back and forth. The verbal foreplay.
But she didn’t want to. It had been too long since she’d felt this aroused. Sex with Shane had always been hot and wonderful and amazing and adventurous. So, why couldn’t she have some of that again?  Even if only for a brief moment?
“You,” she said simply, loving how his eyes widened slightly as if he was surprised at her answer.
“You want sex,” he said matter of fact.
Something about his tone caught her attention and maybe she should have listened to the warning bells that clanged loudly in the back of her head, and yet…she didn’t.
“I want sex,” she said slowly taking two steps until she was between his legs, her body humming with desire. Already she pulsed with anticipation.
“Why?”
God he smelled good. It took everything in Bobbi to keep still when all she wanted to do was rub her body all over him like a cat.
She tilted her head and gazed up at him, her eyes taking in the stubble that shadowed his jaw, the cleft in his chin and the adorable dimple that softened an otherwise very masculine face.
Why?  There were a hundred and one reasons why this wasn’t a good idea, and yet…
“Because I can’t remember the last time I had an orgasm.”
Surprise lit his eyes and for a moment he said nothing. Any other man would have been all over that information. Belittling her ex-fiancé Gerald and his inability to either please his woman, or the fact that he hadn’t been getting any.
But not Shane.
Silence stretched for several more moments and when he spoke it was anti-climactic. She might have jumped.  Who knows, maybe she did.
“This is going to get complicated,” he said slowly.

Oh, yes do things ever get complicated and that's the way I like them.  So, I've a few days to read coming up and I'd love some more second chance at love books.  Thoughts? Anyone have a favorite to recommend?