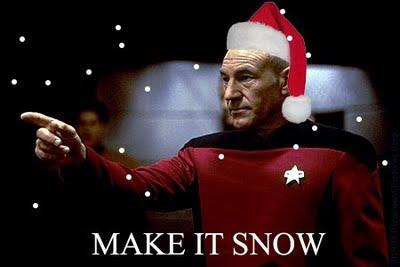 I wrote the original version of this post at about 9PM on Christmas Day, mainly because I wasn't sure we'd have power or Internet much longer. Euclid hit us pretty hard with lots of wind and snow. 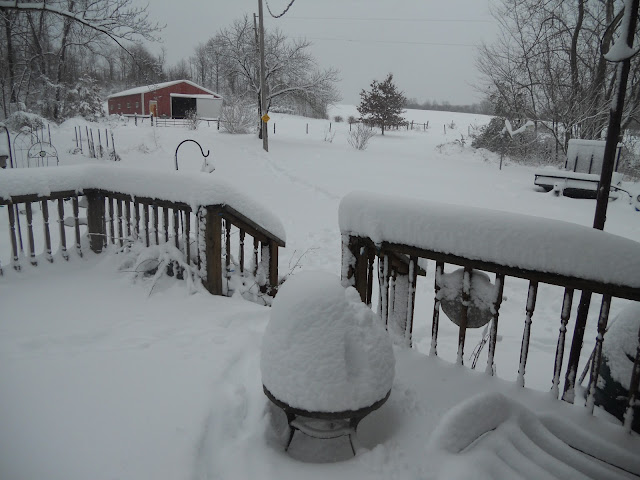 This picture was taken at 11:00 on Wednesday morning. We've probably gotten this much snow before, but it's been a while. I had to get my DH to help me close the back door to the barn because the snow was blowing in on my hay--and wet hay is a bad thing!

I hadn't closed that door in years--I had to dig it out at the bottom and my DH put it back on the overhead track. Clearly, I should've done that sooner, but snow usually doesn't blow in from the east!

When did they start naming winter storms anyway? Is it because the meteorologists know they're going to get worse due to global warming? The last storm that rolled through here looked like a hurricane, and so did this one. Makes you wonder, doesn't it?

If all goes well, I'll be going to see The Hobbit with my family on the evening this post goes live. My neighbor promised to plow our driveway when the snow stops, but we may decide to stay home anyway, in which case (unless we lose power) I'll be here in front of my computer, doing what I always do, even though it is my birthday.

That's right. Today is my 57th birthday, and in a little over a month, Wildcat, the ninth book in my Cat Star Chronicles series will be released--sort of a belated birthday present. 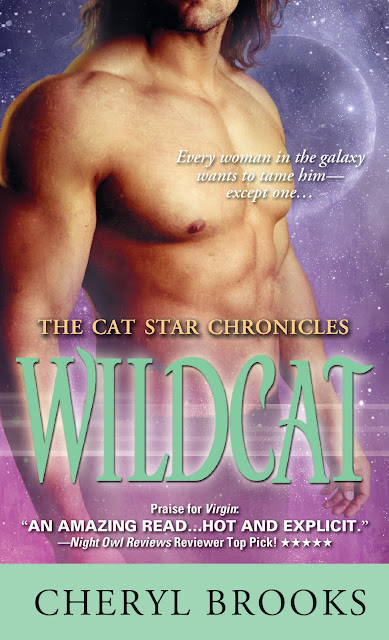 So far, I've gotten two early birthday presents in the form of reviews. This one is from RT Book Reviews:


WILDCAT
by Cheryl Brooks
Genre: Paranormal/Urban Fantasy, Futuristic
Sensuality: SCORCHER
RT Rating: 4 Stars
The ninth in Brooks’ Cat Star Chronicles is pure alien/human romance. The slow burn between horse breeder Sara and former brothel star Jerden is delicious, and when they finally realize they may need each other to heal, the consummation of their relationship is scorching hot. An added delight is the mystery of who wants to harm Sara’s prize stallion. All combined, they add up to a book that keeps you turning pages in a series that’s far from going stale.
Sara Shield settles on the frontier planet of Terra Minor to escape her past and start her horse-breeding ranch. Meeting Zetithian Jerden Morokovitz is not in her plans, and yet here he is. But Jerden is broken: The murder of his former lover left him nearly insane from grief. When he finds himself inexplicably attracted to Sara, he vows to heal her like she has healed him. Unfortunately, more than one person would like to see them kept apart. (SOURCEBOOKS, Feb., 384 pp., $7.99)
Reviewed By: Cyndy Aleo

And this one from Booklist:


Wildcat.
Brooks, Cheryl (Author)
Feb 2013. 384 p. Sourcebooks/Casablanca, paperback, $7.99. (9781402251719).
Sara Shield, a horse breeder on Terra Minor, has no use for men, even though Zetithian males have an impressive array of characteristics making them the most coveted sexual partners in the galaxy. When the expensive stud she had shipped in from Earth disappears, rumors fly that her neighbor Jerden, one of the few survivors of a genocide, has been seen riding a magnificent stallion. Terra Minor was designated the new Zetithian homeland following the destruction of their home planet. Jerden, who attracts animals of all kinds, tries to return Danuban, but the horse has his own ideas. When Jerden falls ill, Danuban manages to bring him to Sara’s house. Sara and Jerden, both being stalked by suitors, decide to pretend to be dating. Brooks gives Jerden and Sara over two hundred pages to become real, believable, and important to the reader before their relationship evolves into a highly erotic sexual one. Although this is the ninth book in the Cat Star Chronicles, it stands firmly on its own merits.
— Diana Tixier Herald

Overall, I'm pleased with the reviews and the book, but you know how it is with us writers. By the time a book is released, we're working on something else--and have been for quite a while. I'm currently at 85,000 words on Rascal, book 10 of the series, and the events in Wildcat are past history. Now I have to shift gears and go back to Wildcat and the earlier books, too. This is the schedule for the virtual tour during the month of February. As you can see, it involves all nine books!

Unfortunately, I don't have the first clue as to what I'll write for any of those posts. I'm leaving that job for the month of January. Since the manuscript for book 10 is due on March 1st, I was hoping to finish Rascal by New Year's Eve. I still might get it done.

As long as we have power.