By Cheryl Brooks November 30, 2012
By Cheryl Brooks
Here we are in that transition period between Thanksgiving and Christmas, wondering whether to go shopping, continue giving thanks, or start working on Christmas cards. Funny, even though I'm now essentially writing full time and not working as a nurse anymore, I can't get over viewing the holiday season with some trepidation. I still have to do all of the same tasks, and theoretically have more time in which to accomplish them, but the same vague sense of panic remains. The first Christmas card I receive always cranks the tension up a notch. Is it time to send mine out, or is it still too early? Should I spend a day updating my list to include all of the people I no longer work with? Trust me, there are a lot of them and the postage alone will probably mean less candy in the stockings of my two sons. Not that any of us really need candy, but that candy is part of our tradition.

When counting my blessings this Thanksgiving, first and foremost was the added time I have to spend with my family. The strange thing is, I'm still not sure what to do with it. After years of baking pies on the morning of Thanksgiving Eve, taking a nap that afternoon, going to work that night, then coming home in the morning and putting the turkey in the oven before I went to bed, I was at something of a loss. I did all the same things--except for the napping and the working--and after the turkey was properly stuffed and in the oven, I had no idea what to do. I have no traditions for how to spend that period of time other than setting my alarm to get up when the turkey is done. My youngest son was playing video games. My oldest son was still asleep. My husband also slept in, both of them having stayed up until some ungodly hour watching something or other on TV. It still astonishes me that anyone would voluntarily stay up so late. I mean, they used to have to pay me to do it.

To while away the hours and not prolong the baking time by continuously checking on the bird’s progress, I went out to gather chestnuts. Unfortunately, the drought we endured this summer had apparently been the ruin of the chestnut crop. I wound up gathering a few hickory nuts instead, and was astonished to find they weren’t black and shriveled or riddled with the same little worms that normally attack the chestnuts. Apparently the drought also had a deleterious effect on the worms. For the first time in many a year, I actually had something to crack with that highly effective nutcracker I inherited from my father. Pa was a black walnut fan, and it takes a heavy-duty apparatus to crack them. 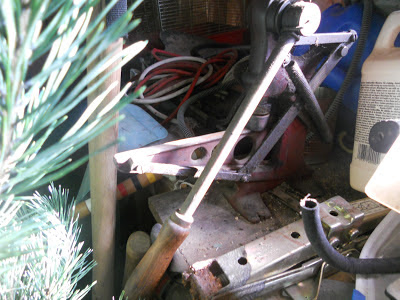 Please forgive the odd camera angle, and yes, that is my Christmas tree that I had to hold out of the way. Yet another of my traditions is to go with my eldest son Mike to buy a Christmas tree the day after Thanksgiving, which is the only Black Friday shopping I ever do. We bring it home, trim a bit off the bottom of the trunk, and put it in water in the garage until I'm ready to bring it in to decorate, usually somewhere around the 10th of December.

This year, I had something different scheduled for Thanksgiving weekend--as opposed to working so that the avid shoppers in the ICU could have the time off. My critique partner and fellow Indiana RWA chapter member Sandy James and I were asked to do a Q&A session on writing paranormal romance at the Starbase Indy Star Trek convention. This was the first writer-related event I'd ever been able to drag my husband and son to, and I must say it was nice having an entourage to carry my books for a change.

Sandy and I did our best to blend in with the Klingons and Vulcans and assorted Starfleet personnel, and we rated our presentation as a success, considering that it was well-attended, despite going up against an astronaut who was scheduled to speak at the same time. 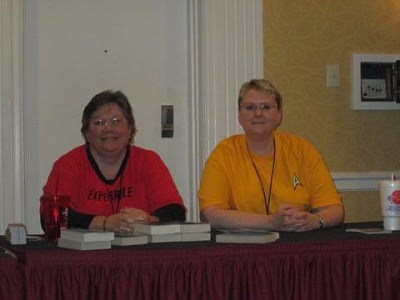 I'm not sure we'd have had anyone in our audience at all if we'd gone up against Martok and Gowron, however. They were a hoot! Never thought I'd see the day when two Klingon warriors would be standing up singing songs and telling jokes. 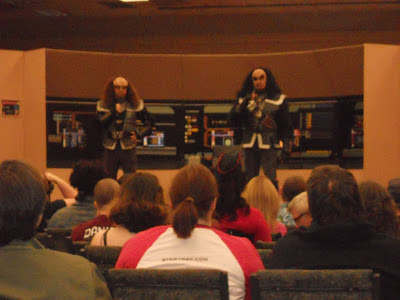 Something else to be thankful for, I suppose. 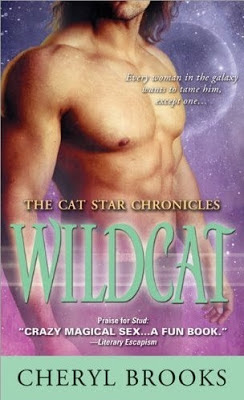 Are you doing anything differently this holiday season? Starting a new tradition or revising an old one?

Be sure to include your email address in your comment so that I can contact the winner! Contest closes at 6PM on December 2nd!