Living Through a Home Remodeling Project


It has been almost two years since we remodeled our kitchen, and I’m pretty excited to start a new project soon. We are having our master bathroom remodeled. Goodbye black toilet and bathtub. Good riddance crazy shower door that people keep telling me looks like a confessional. Hope to never see you again shiny red tile. (We call it our Liberace bathroom.)

I know many people cringe at the thought of remodeling. Complete disorder for weeks, a fine layer of dust that keeps coming back for months after the job is finished, and the unpredictability that comes with any remodeling job just isn’t their thing. I’m not fond of those parts either, but there were a lot of positives that came along with the kitchen remodel, not including the awesome end result. We had fun!
(Tip for dealing with the fine dust: Change the air filter in your furnace every few days during the job.)

Cooking was a challenge, but we overcame it with “campfire” nights where we roasted hotdogs in the fireplace. I made meals in the slow cooker. Family invited us over for dinner. We had pizza and movie nights.

Life was simplified. We had four cups, four plates, four spoons, and four forks. They were washed in a basin as soon as they were used, so I never had to deal with piled up dishes. When it’s all you have, you keep up with it too. After having the kids out of school for the holiday weekend and me spending way too much time in the kitchen washing dishes, I’m tempted to pack the extra dishes away. I swear they use five to six glasses a day each when they are home, but if they only had one...

I loved picking out all of the different elements (cabinets, tile, countertop, lights, hardware) and watching the room slowly come together. My daughter and I would take pictures to post on Facebook every night, and she would jump into the frame at the last second. We had our own version of “Where’s Waldo”. 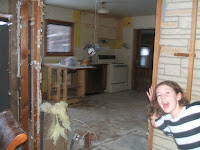 We grew fond of our contractor and his right-hand guy, and I actually felt sad when they were finished. I enjoyed the hustle and bustle of men coming and going, the sound of hammering, and the surprising conversations they had when they didn’t think I could hear. At least I’m assuming they didn’t know I could hear them. Did you know some guys talk about relationships just like women do???

Our kitchen remodel was happening at the same time I had a huge deadline. It seems like that would be the worst time, but it lit a fire under me. I was excited by the daily progress on the kitchen and it translated into daily progress on my novel. Plus, some days I was forced to retreat to the public library, which helped to keep me on task.

So here I am almost two years later, deadline looming in the near future, and we’re about to jump into another adventure. I can’t wait! Do you have a big project you would like to tackle this coming year?