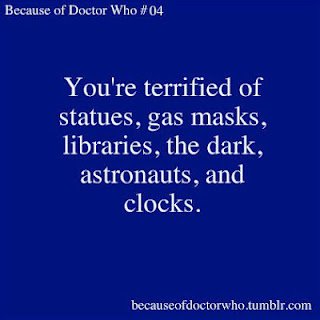 I’ve been watching Doctor Who since I was a kid. It used to scare me terribly (does anyone else remember the disembodied hand that would strangle people? Or was it just me who had to take a run at my bed in case there was a hand under it?—I was about 8 at the time).

As an adult I loved the reboot—that may also have had something to do with David Tennant. The reboot has made some innocent items scary. Is that an extra shadow in my bedroom? And don’t start me on the gas mask thing *shudder*.

Because it’s Halloween I thought I’d share my own story of the terrifying innocuous thing.

Several years ago I lived in Victoria for about six months, cold, wet and down the peninsula (which meant colder and wetter and closer to the Navy base). Lying in bed drifting off to sleep listening to the rain…


My eyes open wide. “Did you here that?”

“What?” said Hubby who obviously hadn’t heard anything because he was asleep.

“That! It sounds like someone against the glass.” Or something…

Hubby and I creep around trying to find out who is making that noise in the middle of the night. No one there. The noise continues. Unsettling, bizarre and like someone is running their fingers over wet glass.

Come daylight there was about twenty snails stuck to the bedroom window.

That scene in the Brothers Grim with the glass boxes and the snails? I can hardly type it as I want to run in the other direction.

My hubby ordering snails at a restaurant…I couldn’t face it so he settled on frogs’ legs (which I couldn’t even try because I’d done too many dissection classes at Uni (College) with cane toads—long story which I’ll tell another time).

I’ve taught the kids to pluck the snails from the garden because even the idea of touching their shell freaks me out.

So know you know how lame I am, it’s time to share. Do you have a fear of something random? Do teddy bears terrify you? Do Unicorns unsettle you? Do Siamese cats make you scream?