By Hot Ash Romance Novels August 29, 2012
Trends aren't just for writing. The new trend is to say you're obsessed with something. Picture Kelly Osborn on Fashion Police saying, "I'm obsessed with those shoes!" Don't watch it? Well, what can I say? That's something else I'm obsessed with.


Some people are obsessed with the Twilight novels...or were. Has the trend passed? I'm not sure. I've always been told not to write to trends. But isn't that what happens organically? Who wants to produce a book that no one will buy?

Beyond writing, I have another obsession. I'm obsessed with euro beads. That's the generic term for those pricey Pandora bracelets. For those of us who cannot afford the Pandora brand, there are less expensive alternatives and they're just as pretty. I love making them! 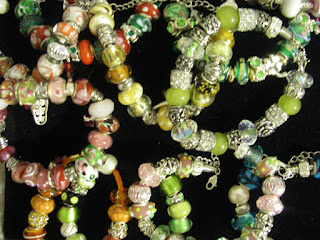 I've become so obsessed, I can't wear all the bracelets I make. Even though I'm branching out into necklaces and earrings, I still need to give some away to prevent a jewelry box explosion. Did I say 'give away?' I meant to say sell or trade. Otherwise, how am I to support my beading habit?

So, I opened an Etsy shop and began trading 'stuff' on Listia. What are these places you ask?

Well, Etsy is where you can sell anything homemade. I also sell my autographed books there. Hey, I made them in my home, so it counts. (grin) My store is called Ashlyn's Imagination, and here's the link. http://www.etsy.com/shop/AshlynsImagination  I also give a 20% discount for the code AshlynCreates.

Listia is a smart new website based on the principle that "One man's trash is another man's treasure." I'm obsessed with the idea of recycling. My husband and I don't like clutter. Anything we're not using that doesn't have enormous sentimental value goes on ebay, Amazon, or Listia.  http://www.listia.com What I like about Listia is that no money exchanges hands. People simply put up their item and others bid for it with points. The one who offers the most points, wins!

How do you get points? The site gives you 500 to start, and then you're off and running! People bid on whatever you put up for "sale". Thus, you gather points to bid on stuff you want (beads) AND they take your unwanted junk off your hands. Whoever came up with this idea was brilliant!

So...what will I ever do if my favorite trends go away? Namely writing about vampires, werewolves, and other paranormal characters. Or euro beads? Or TV fashion and makeover shows? There, there, Ashlyn. Don't cry. Some other trend will come along. There will always be plenty of new obsessions to discover.

So, what's your obsession?