My Week in Anaheim by Tamara Hogan

Like hundreds (thousands?) of other romance writers, I recently returned from Anaheim, where I attended the 2012 Romance Writers of America  National Conference.

Anaheim, of course, means Disneyland, so Mark and I flew out a couple of days early.

MONDAY: We had a great time at Disneyland. Funny how Minnesotans had to travel to SoCal to experience some cooler temperatures! I didn't hit the wall until about 6:00 p.m., when my Achilles tendon was finally clipped by one SUV-sized stroller too many.

I spent the day at the LAPD with the Kiss of Death Special Interest Chapter,where a number of the LAPD"s finest (and I do mean FINEST) showed us what they do. We spent the day at two training facilities, where we saw drug dogs, police horses, and LA's men and women in blue up close and personal. The biggest surprise was being taken out onto the test track, bundled into six-point restraints in the front passenger seat of a squad car, and having a training officer whip us around the track at 70 mph - and I'm so bummed I can't seem to embed the video! Though several people reported nearly losing their cookies, this fan of The Fast and the Furious: Tokyo Drift had a blast.

On Tuesday night, I had an opportunity to get together for pizza and wine with my Ruby Slippered Sisterhood blogmates at a nearby super-secret hotel. ;-)

WEDNESDAY: Being I have a manuscript due on Monday, Aug. 6, I reserved Wednesday for writing, taking a quick break to have lunch with **squee** Nalini Singh, a prize I won at a Maya Banks auction. Lots of girl talk, and great writing advice - and OMG, I could listen to her accent forever!

The Readers for Life Literacy Signing was Wednesday evening. Great fans, great fun, and a great cause.


THURSDAY: The conference officially starts with a great keynote by Robyn Carr - I admit that even this super-stoic Scandinavian teared up a little at the end - followed by dozens of great workshops. Thursday was also the first night for serious, chapter-sanctioned partying, with me scheduled to attend The Gathering (the Fantasy, Futuristic and Paranormal Special Interest Chapter's big shindig) where my debut novel, TASTE ME, was up for a Prism in the Dark Paranormal Category. It was a huge honor to place first in my category, but I also won surprise Prisms for Best First Novel and <gulp> Best of the Best! As you can see, the awards are actual Prisms! They're heavy! and absolutely freaking gorgeous.


After The Gathering, I headed over to the Kiss of Death Chapter's "Death By Chocolate" party and The Daphne Awards, being held next door. My friend and blogmate Darynda Jones won two Daphnes that night, and a Rita on Saturday!


FRIDAY: More daytime workshops, but of course Friday's big event was the Sourcebooks publisher party that evening. We party-bussed to Mastro's Ocean Club for a great meal and even better company. (Get well soon, Dominique!)


SATURDAY: My RWA land chapter, Midwest Fiction Writers, got together for breakfast, fueling us all up for another day of workshops, including mine. Unfortunately, "Superbad" was scheduled for the exact same time as the Sourcebooks author signing. GAH! ;-(

Dexter and I extend retroactive regrets.


Below are Darynda Jones, her RITA, and some of the Rubies. We all took turns rubbing RITA's belly for good writing luck. 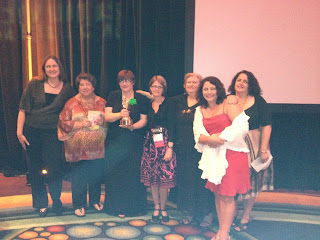 SUNDAY:  Breakfast with blogmates, then the flight home. And no, I haven't unpacked yet. Why do you ask?  ;-)

Question: Which author would you most like to have a private lunch with, and why? Which burning questions would you ask?

Tamara Hogan loathes cold and snow, but nonetheless lives near Minneapolis with her partner Mark and two naughty cats. When she's not telecommuting to Silicon Valley, she enjoys writing edgy urban fantasy romance with a sci-fi twist. A feral reader with an unapologetic television addiction, Tammy is forever on the lookout for the perfect black boots.

Her debut, Taste Me, was awarded a Daphne du Maurier for Mystery and Suspense, and recently won Prism Awards for Best Dark Paranormal, Best First Book, and Best of the Best.