So Hot It Sizzles…

Heat—Lord knows we’ve had enough of it in Maryland lately. When I found out the topic for the month was heat, I wasn’t thrilled. I really not a person who like temperatures to rise above seventy-five degrees unless there’s fifteen percent humidity, and if you’ve ever been to Maryland, you’d know that it’s not known for low humidity. It’s been well over a hundred here for several days and I’ve had just about all the heat I can stand.

Then I thought about my characters and how they feel about heat. Now that’s an entirely different story. They love the heat—and no, I’m not talking about the weather. Heat is the one ingredient that every romance must have. Yes, even the Amish ones. There has to be that attraction, that spark, that threat of internal combustion for two characters to even want to get to know more about each other.

So how do we put that on the page? I haven’t a clue. I just start writing and it happens. Honest.

I know, that’s not helpful. So I went back to look at the first meeting of my hero and heroines in each book, what I found was surprising. In Romeo, Romeo, Nick meets Rosalie on the side of the expressway while she’s kicking her flat tire. He thinks she’s a lunatic, cute but crazy.

Sexual chemistry, in my books at least, comes from a definite mutual attraction and emotion the two spark in each other that wouldn’t happen with anyone else—more likely than not is anger.

In Romeo, Romeo it was more exasperation. Nick accuses Rosalie’s boyfriend of being an idiot for not satisfying her, not being there when she needs him, and allowing someone else to ride to her rescue and come on to her. She can’t believe his nerve—who the hell did he think he was, Dr. Phil? Then he asks her why she puts up with it. She explains it’s to keep her family off her case. Nick keeps pushing all the right buttons. His sexy grin, along with his scarily accurate description of her relationship has her explaining things to him she’d never tell a stranger—like her thoughts on marriage. 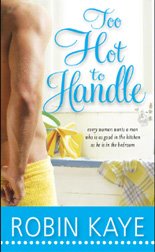 In Too Hot to Handle, the first time Mike and Annabelle meet it’s at her sister’s wedding, and she almost passes out because he looks exactly like her deceased fiancé. He comes to the rescue, she drinks way too much and wakes up next to Mike wondering if ghosts have sex. Annabelle’s mortified that she slept with a total stranger who could pass as her dead finance’s double except for a bump on his nose, the color of his eyes, and the size of a certain appendage. Again, there’s strong emotion that another man would not inspire.

In Breakfast in Bed, Becca catches an intruder taking a shower in her new apartment. She’s standing there holding a baseball bat and waiting for him to emerge before attacking, only to see her best friend’s naked brother—a guy that certainly revs her engines but that she doesn’t like. They fight about whose apartment it is, and there are all sorts of sparks flying. Anger is the emotion that gets Becca and Rich together.

In Call Me Wild, Jessie had gone for a run and Fisher Kincaid just happened to be behind her. She did her best to lose him. Fisher had a hard time keeping up with her—something that had never happened before, and that he certainly wouldn’t cop to. He spent five miles staring at her ass, and then an hour later, they run into each other at Starbucks.

There’s sexual attraction but the two of them each hold a grudging respect for the other. Jessie watches Fisher long enough to think he flirts with every woman in the room, and thinks he’s the type of guy who spends half his time tanning, the other half bleaching his teeth, all the while living in his parent’s basement. As Fisher’s leaving, he literally runs into her and then asks her out. Jessie blows him off and Fisher walks out smiling. That’s when she thinks he’s not only gorgeous and in good shape, but not the sharpest tool in the shed. The two keep running into each other, and she wonders if he’s a stalker, but at the same time, almost looks forward to they’re daily meetings. Again, not a feeling any other man would inspire.

So what does it say about heat? Real sexual chemistry can’t exist without an equally strong emotion, and the hero and heroine have a way of drawing the emotion or reaction out of the other almost immediately. Like a flint to a stone, once they strike, you see flames. If you struck a flint to a bar of soap, nothing would happen.

What else do you think is necessary for sexual chemistry, and how hot do you like it?