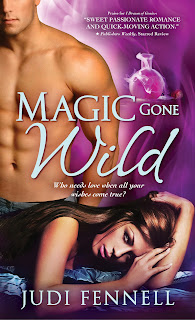 As the school year winds down, there are some wild times happening. I have a Kid graduating and going off to College this year - mixed emotions all the way around. I'm not fond of this thing called Change. I shall miss my Kid. My first. It's bittersweet.

I had to laugh at Robin's upcoming release, Call Me Wild. Sourcebooks has a thing about WILD, I guess. (And you remember that the second book in my Mer series was WILD Blue Under...)

And in other news, Genie Knows Best is up for a PRISM Award. It's the 2nd genie book and I find it interesting that my 2nd Mer book (see above) won a PRISM. Maybe it's the middle-child syndrome. *shrugs.

So, in honor of these changes, and because I just don't want to think about Kid leaving, I'm posting TWO excerpts below, one from Magic Gone Wild and the other from Genie Knows Best. Enjoy!

pre-orders are up at Amazon and B and N,  and it's up for a giveaway at Goodreads.

“So what’s the plan again?” asked Merlin. “You lost me.”
Zane would like to lose him. The damn bird hadn’t shut up since they’d stepped off the porch, bitching the entire walk around the property. Zane had offered him the opportunity to leave, but the bird felt some crazy compulsion to stick to Vana like glue, as if he expected Zane to try something.
Yeah, he might be thinking along those lines after that teaser of a kiss in the kitchen, not to mention the one in the attic when he’d thought she was a figment of his imagination. But she was a genie, for crying out loud. One didn’t lust after a genie.
Then she walked a few steps ahead of him, her see-through outfit leaving nothing to the imagination, and, yeah, maybe one did.
“Isn’t this where the lawn-bowling court used to be?” Merlin clacked his beak, and midflight, his wings turned purple and gold.
“Yes. By the fence beneath that mimosa tree,” Vana answered.
“I’d rather have a mimosa than go lawn bowling near one.” Merlin landed on Zane’s shoulder. “You don’t mind, do you, buddy? My wings were getting tired. Just flew in from Baghdad, you know.” The bird cracked only himself up with the joke. “Geez, talk about boring. What is it with you mortals? Can’t take a joke.”
“I have you on my shoulder, don’t I?”
“Hey, good one!” Merlin nipped his ear.
“Do that again, bird, and we’ll go for the deep fryer this time.”
“Sheesh. There you go, back to the no-humor thing.”
“As I was saying…” Vana reached up to Zane’s shoulder and shifted Merlin onto her fist. “The court was here, and over there was one of Peter’s rose gardens. You can still see the brambles. I bet the bushes will spring back once I clear it out.”
“You gonna do it now?” Merlin asked.
She stopped. “I could. If it’s okay with you, mast—I mean, Zane?”
Zane checked their immediate vicinity. The closest neighbor was half a mile beyond the driveway. A dozen acres surrounded this manicured—as it were—portion of the property, and the Vlad the Impaler iron fence, complete with gargoyles, wasn’t letting anyone in. They were all alone.
“Sure, go ahead.” He wouldn’t think about being all alone with her.
And then Vana puckered up and blew a kiss.
If the brush hadn’t burst into flames, he might have.
“Oh no, oh no, oh no!” Vana wrung her hands as Merlin flew onto a mimosa branch. “I said ‘tame,’ not ‘flame’!” She made some more kissing noises.
The flames shot up higher.
Shit. He didn’t have to worry about someone strolling the property to get an eyeful. The bonfire was big enough to alert the entire town.
“Vana, we have to put it out!” He looked around for… what? A fire hose? Extinguisher? Waterfall?
Not a damn thing in sight, which shouldn’t be surprising, given the rest of the nightmare he’d encountered since arriving here.
“I’m trying to!” She made another kissing noise, and two giant flames—one red, one blue—shot up the middle. “No! Not red-blue! Res-cue! Res-cue!”
It was no use. The more flustered she got, the more her magic went haywire.
Zane ducked. They did not need a bunch of hay appearing out of nowhere—Jesus. Now she had him thinking crazy things, too.
And then she started fiddling with her fingers again. Puckering her lips.
Yeah, that hadn’t worked out so well. So Zane did the first thing he could think of. He tugged her to him and kissed her. 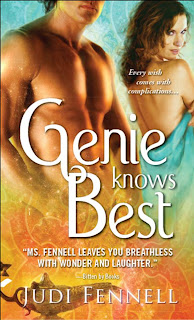 
A genie.
A genie. No. That wasn’t possible. Genies didn’t exist. This had to be a dream. It was crazy. It was ridiculous. Insane.
Yet that kiss had been real. Samantha put her fingers to her mouth, the feel of her skin nothing like that of his lips.
She glanced at him. Why had he kissed her? And why wasn’t she giving him hell for it? She’d been about to, but then pitchfork-carrying, pointed-hat-wearing gnomes had crawled out of the downspouts, and… oh, yeah, that’d be why. It had nothing whatsoever to do with Albert’s offhanded, metaphorical stomping of her dreams and self-esteem. Nothing to do with being blindsided yet again. Being used. No, nothing to do with that at all.
No, the reason she wasn’t taking umbrage with that high-handed kiss was because the insanity of this situation was even more insane than some random guy kissing her.
Some random, half-naked, hot guy.
One of the gnomes tripped and his pitchfork went flying, landing at Samantha’s feet.
Gnomes. Pitchfork-bearing gnomes. That was insanity.
Then the gnome picked up the pitchfork, tipped his hat to her, and army-crawled back the way he’d come.
She had to be in Oz. Or Narnia. Maybe Middle-earth. Or, possibly the Addams family’s neighborhood because, not only was she looking at gnomes, the likes of which she’d only ever seen on a television commercial, but a dozen of Cousin Itt’s cousins were shuffling out of one building, and a parade of men no taller than the back of that suddenly appearing chair were filing out of another. Dressed in green, the men had black shoes, black belts, and black bands around their green top hats, all with big gold buckles on them.
Yes, she’d definitely gone over some rainbow because this had to be Oz—and that guy at the head of the green-man brigade the mayor—because she’d planned Dad’s funeral for November seventeenth, not March seventeenth, and she hadn’t had even a sip of the arak.
“Top o’ the mornin’ to ye, lass,” the mayor said with a heavy, deep brogue, putting the kibosh on Oz. Maybe she was in Brigadoon.
“All right, all right, stand back. Give the lady some breathing room.” The fennec was running back and forth like a Border-collie wannabe as the parade fanned out around them.            “She’s still in the adjustment period. No one say anything to upset her.”
Ah, her very own knight in shining fur. Pity he was too late on the no-upsetting thing.
Then a centaur trotted up behind the crowd, taking upset to a whole new level.
“Kal!” Half-horse, half-man, the creature fist-pumped the genie over the little people. “How’s it goin’? You done yet? I figured with the High Master all set to announce something big at the bash next week in Al-Jannah, you’re finally getting that promotion.”
Aladdin—no, Kal—shook his head. “Not yet, Wayne. There’s still her.” He nodded her way, and the sword swung on his hip.
“Her… I mean, me?” Samantha squeaked. She stuck her hand behind her back and furiously pinched herself. Wake up, wake up, wake up! “What do I have to do with anything?”
“Oh lots,” said the fennec, bouncing around. The guy could use some Xanax. “You’re going to—mmmrph!”
Kal scooped up the fox and tapped his snout. “Enough, Dirham. Don’t forget your job.”
Job? The fox had a job?
Well, sure. Why not? Why not a feather boa, too?
That’d be because the boa idea had been claimed by the pair of sparkling white unicorns—literally sparkling and literally unicorns, horn and all—strolling down the sidewalk.
“I’ll take that aspirin now, if you don’t mind.” Samantha held out her hand to Kal, then tossed the pills into her mouth sans water. Wine. Whatever.
Gulping them down, she grimaced at the chalky residue they left on her tongue. “Wish I had chocolate instead,” she muttered.
And, voilà! A chocolate bar hovered before her eyes.
This time she sat without an invitation. “How… How is this happening?”
The gnome and the army of munchkins chuckled. Even Cousin Itt and his cousins cracked smiles beneath their hair, the upward curve of yellow teeth behind the dreads making them look like Rastafarian jack-o-lanterns.
Dirham squirmed in the genie’s arms. Nicely muscled forearms that had been around her not five minutes ago—
“It’s because Kal’s your genie and he’s here to do whatever you want.”
Now that had some interesting possibilities…
###

So, parents out there, how do you handle the college thing? I remember when I went off, how excited I was... and how my mom cried. I TOTALLY get it now, though I am really excited for Kid.