This Could Be the Start of Something...

By Joanne Kennedy May 27, 2012
by Joanne Kennedy
Summer in Wyoming is a time of new beginnings, and this one's a doozy for me and my family. Last week, I watched my son graduate from the Air Force Academy and move on to pilot training. Next week, I'm going to visit my new granddaughter. The week after that will mark the release of my fifth novel, Cowboy Crazy, and the excitement of a big blog tour. And through all this change and excitement I'm starting a new series about three men who owe their lives to one rancher, a horse trainer who took them in as foster brothers and taught them to trust the bonds of family. 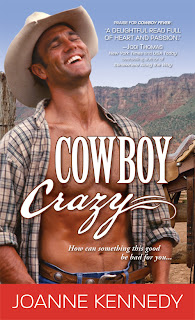 To honor all these new beginnings, I thought I'd share an excerpt from Cowboy Crazy that marks the start of something good... in a slightly racier vein.
Things are heating up between trodeo cowboy Lane Carrigan and publicist Sarah Landon. In this scene Sarah realizes for the first time that Lane isn't your typical roughstock rider. He's looking for something more than an eight-second ride--and he's going to make her face the fact the feelings simmering between them are something more than lust.

“Okay. If we can’t help ourselves, that would mean we have to help each other.”

“Right. You rip off my clothes and I’ll rip off yours.”

“Yours are already gone.”

“Then catch up, cowboy.”

She heard a distinct tearing sound as she tugged at the sleeve of his shirt. Well, maybe she should rip off the other sleeve too. That was kind of a cowboy thing, wasn’t it—wearing a shirt with the sleeves ripped off? It should be, anyway, if the cowboy had muscles like Lane’s.

She pulled him down on top of her and then the shirt was gone and so was everything else. She sank her fingertips into the hard muscles of his haunches and steered him right where she wanted him.

The muscles flexed and she felt him there, right there.

Still there. No further.

She opened her eyes to find his face inches away. His gaze was so intense she closed her eyes again.

She didn’t want to do it. If she looked into his eyes there’d be more than a meeting of bodies going on; there’d be a meeting of minds, and that was the last thing she wanted.

He started to pull away and her eyes flipped open like a doll’s. “I’m here,” she said.

“Good.” He moved into her, then out, watching her face. His gaze was tender and hot all at once, and she felt her shield slipping. She could almost believe this meant something to him, but that wasn’t possible. They barely knew each other. This was a one-night stand, a brief, hot interlude of mindless sex, a slaking of both their appetites and nothing more.

After all, he was Lane Carrigan. He could have damn near any woman he wanted. A small-town girl turned spinster businesswoman was hardly what he’d choose.

“Nobody ever felt this good,” he whispered. “Nobody.”

She tried to say something smart and witty, but what came out was a pleading animal noise as she pulled him into her again. After that she stopped thinking and simply moved. It was like music, the way they dipped and soared, asked and answered, over and over, until she cried out again with a scream that released all the darkness inside her and let his light flood in to take its place.

When she opened her eyes again, the moon had slid into the small skylight and was looking down at her with its blank, serene face. It felt like a blessing.

Lane lay beside her, sleeping. She hadn’t noticed what long lashes he had. They softened the harsh masculine planes of his face, making him look less like a mythical outlaw and more like a man.

A man who made love to her like there was actually love involved. But then, Lane did everything all-out. When he rode, he rode wild animals; when he made love, he chose a woman determined to resist him. Even when he slept, he slept hard.

She shimmied out from under the arm he’d tossed over her waist and slipped off the bed, gathering her clothes. When she’d finished dressing, she tapped him on the shoulder.

He rose and dressed without a word, as if he was still asleep—or maybe he knew talking would break the spell. As he dressed, his shadow shifting in the moonlight, Sarah sat on the edge of the bed and slowly came to her senses.

What the hell was she thinking? Real life didn’t end at the entrance to the rodeo grounds. You couldn’t step outside your life. You couldn’t stop time and do what you wanted and expect no repercussions.
There was always a price to pay.