IT'S SPRING- SO GET YOUR DERBY ON!


One of the things I most enjoy about spring is the excitement of the horseracing season. While most Americans are familiar with the American Triple Crown, a series of three races established in the late 19th century that represent the zenith of achievement for a Thoroughbred race horse, most are unaware of its British roots.

THE ORIGINS OF THE RACES
The St. Leger Stakes,  originally proposed as the Rockingham Stakes was devised by the Marquess of Rockingham, an avid turfman and  Anthony St. Leger, an army officer and politician who lived near Doncaster, South Yorkshire. The inaugural running was held at Cantley Common on 24 September 1776  and later moved to its present location, Town Moor, in 1778. The first winner was a filly owned by Rockingham. 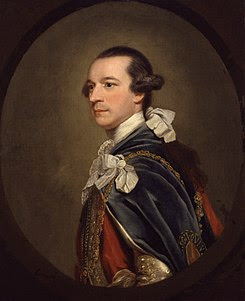 2ND MARQUESS OF ROCKINGHAM
Run over 1 mile, 6 furlongs and 132 yards (2,937 metres) The St. Leger is currently the final leg of the English Triple Crown, which begins with the 2,000 Guineas, and continues with the Derby. It also completes the Fillies' Triple Crown, following on from the 1,000 Guineas and the Oaks.

THE EPSON DERBY
The Epsom Derby, co-founded by the 12th Earl of Derby and Sir Charles Bunbury, the Steward of the British Jockey Club,  originated at a celebration following the first running of the Oaks Stakes (A race only for fillies) in 1779. When a second race was proposed to include stallions and geldings, it was named by coin toss between Lord Derby and Bunbury. Although Lord Derby won the toss, Sir Charles won the inaugural race with his young stallion Diomed. The race is currently run over 1 mile 4 furlongs and 10 yards (2,423 metres) at Epsom Downs Racecourse in Epsom, Surrey.

The 2,000 Guineas, first run on 18 April 1809 was followed by the introduction of a fillies only race called the 1,000 Guineas, both established by the  Jockey Club under the direction of  Sir Charles Bunbury, the co-founder of the Derby at Epsom.  It is currently Britain's richest and most prestigious horse race, sometimes referred to as the "Blue Riband" of the turf. The race currently serves as the middle leg of the British Triple Crown. The 2,000 Guineas Stakes was first held in 1809, run over 1 mile (1,609 meters) at Newmarket.

THE U.S. TRIPLE CROWN
The Kentucky Derby- In 1872, Col. Meriwether Lewis Clark, Jr., grandson of William Clark of the Lewis and Clark expedition, traveled to England, visiting the Epsom Derby run since 1780. After returning home to Kentucky, Clark organized the  Louisville Jockey Club for the purpose of raising money to build a racing facility later to be named Churchill Downs after his relatives, John and Henry Churchill, who had provided the land for the racetrack. On May 17, 1875, in front of an estimated crowd of 10,000 people, a field of 15 three-year-old horses contested the first Derby, run at 1½ miles (2.4 km), the same distance as the Epsom Derby. In 1896, "The run for the roses" was changed to its current 1¼ miles (2 km).

Preakness Stakes  In 1873 Maryland Governor Oden Bowie named a new mile and one-half (2.41 km) race in honor of the colt Preakness who won the Dinner Party Stakes on the day Pimlico opened (October 25, 1870). After Preakness won, his jockey, Billy Hayward, untied a silk bag of gold coins that hung from a wire stretched across the track from the judges’ stand, thereby establishing the “wire” at the finish line and the awarding of “purse” money. The race is currently run over 1-3/16 miles (1.91 km) dirt track at Pimlico Race Course in Baltimore, Maryland.

The Belmont Stakes  was first held at  Jerome Park in The Bronx but moved twice until the 1905 opening of the new Belmont Park, 430 acres (1.7 km2) racetrack in Belmont, Long Island New York. It is currently run over 1-1/2 miles (2.41 km), the longest dirt track in thoroughbred racing.

Affirmed
Although several horses have come close, it has now been 33 years since a single horse (Affirmed in 1978) has won all three races of the U.S Triple Crown.

JUST FOR THE LADIES:

(Photo taken by my husband last year at the Kentucky Oaks)
Although the triple crown is largely dominated by male horses, there is also a national Triple Tiara (formerly known as the Filly Triple Crown) in both the US and the UK, Kentucky Oaks, run over 1⅛ miles on a dirt track, at Churchill Downs; THE Black-Eyed Susan Stakes, run over 1⅛ (previously 1-1/16) miles on a dirt track, at Pimlico; The Acorn Stakes, run over 1 mile on a dirt track, at Belmont (previously 1-1/2 miles); Thus far, only one filly Davona Dale (1979) has won the national Filly Triple Crown.  In Britain there is also a Fillies Triple Crown for a filly winning the 1,000 Guineas, Epsom Oaks, and St Leger Stakes.

Last year I was able to attend the Kentucky Oaks and the Derby and had a fabulous time! I truly believe it's one of those events everyone should experience once.  Although I won't be there this year due to my decision to attend  The Heart of Dixie Reader's luncheon instead (May 5, 2012) I will be there in spirit and have every intention of wearing my new Derby hat!