What is it About Luck?

I write a lot about luck. I don’t mean to, but it always seems as though some character is particularly superstitious or thinking about luck or wishing she had more luck or—uh-oh—out of luck.

I’m not a big believer in luck myself. I don’t play the lottery or gamble or toss pennies into fountains—very well, sometimes I give my daughter pennies to toss into fountains. My characters often do believe in luck. In reality (can you have reality in fiction?), they’re probably just smart or talented and make their own luck, but that doesn’t stop them from believing in it.

Take Bastien from my latest release, The Rogue Pirate’s Bride. He believes in luck. He’s a pirate, and sailors are notoriously superstitious. Here’s a few lines from the book where he discusses luck with the heroine, Raeven. Her father, a British admiral, has just spotted Bastien’s ship, which is currently housing the admiral's kidnapped daughter. 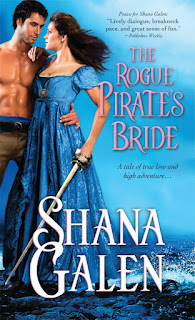 His cobalt eyes were steady, the question burning in them.

“Signal them,” she said, coldly, decisively. “When he’s close enough, I’ll make sure he sees me. He won’t fire if he sees me.”

Bastien held up a hand and the men stepped back. He took Raeven’s arm, steered her to the taffrail. “We can run. I’ve outrun a man-of-war before. I have the wind, so with a little luck…”

She shook her head. “And how long will you run? Weeks? Months? Years? He won’t stop, Bastien. He’ll keep coming after you—after us. Think of your men. How long will they tolerate running from a man-of-war when they could hand me over and resume more profitable ventures? Give it one week, maybe two and you’re looking at a mutiny.”

As you can see, Raeven doesn’t really believe in luck—not in the long-term anyway. She’s fallen in love with Bastien and doesn’t want to trust his life to something so flimsy as luck.

Luck plays a role in the book I published right before The Rogue Pirate’s Bride as well. Adrian and Sophia, Lord and Lady Smythe, are elite spies, who are married to one another, and who’ve just discovered one another’s true identities. They’re both great spies, but they have very different approaches. Here’s an excerpt from Lord and Lady Spy on luck. 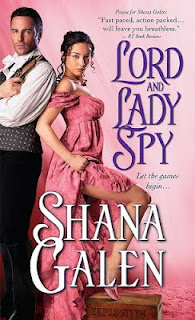 “No, I knew Ducos hadn’t left for Paris the same way I knew Turnbull was hiding in Amsterdam.” She must have seen his eyes widen at the name of the infamous double agent because she added, “Yes, it was I who captured him, and I didn’t need a map or a chart. I used a spy’s true weapon—instinct.”

Adrian barked out a laugh. “So basically you were lucky. You had a feeling.”

She gave him a long, disapproving look. “I didn’t have a feeling. I used instinct.”

“Preparation is what tells an agent the questions to ask an informer, practice tells him to duck, and luck is what led you to Ducos.” He leaned in close to speak the last few words, close enough to see the sprinkle of freckles on her nose. They were light, almost invisible on her otherwise porcelain complexion.

“Are you saying you never think on your feet?”

He shrugged. “Rarely necessary. I always have a plan.”

“But what do you do, sir, when you encounter a situation for which you have no plan?”

He frowned. “Never happens. I have a plan for every contingency.”

If only Adrian had a plan for how to deal with his wife! He’ll need plenty of luck. Can you think of any books you’ve enjoyed where luck played a role? Do your characters believe in luck?