Lucky 13 and Fate by Judi Fennell

By Judi Fennell March 19, 2012
I know, I know. 13 is supposed to be unlucky. But I've never exactly been a traditional sort of person.

That could have something to do with the fact that I was born on the 13th. I consider that very lucky--that I was born, that is. You know, when you think about the odds, it's like 8 billion to one that you would turn out to be you. One quicker little wiggle by the sperm swimming beside the one that made you, and you'd be someone else. You could even be the opposite gender. Tall instead of "average." A genius instead of... well, not. Or maybe not instead of a genius. (I, personally, think all of my readers are geniuses, but that could just be me...)

I always tell my kids to be thankful for what they have because, you know, one little mishap, one misplaced gene, and it could all be so different. I also remind them that they're the sperm that won. (TM) [Yes, I am trademarking that. I came up with it; it's mine. But feel free to use it with proper attribution.]

So... back to being lucky. I'm one to take jabs at Fate: don't put obstacles in my path and expect them to stop me. [I'm Irish - we're stubborn. I'm also Italian and we're hot headed. (Don't ever make me mad; it's not pretty. There's a reason The Hulk was green...) Anyhoo, I'm one of those: If you say I can't do it; I'm going to do it. Doesn't work well when you're a teenager and your parents are the ones telling you no, but then you turn 18 and--

And you find out you actually don't know everything you thought you did.]

Where was I? Oh, yes, Taking jabs at Fate. I walk under ladders on Friday the 13ths. We own a black cat that we named Pagan. I pick up pennies that are tails up. (I also pick up heads-up pennies--a penny is a penny is a penny, and enough of them can add up to some dollars, so I'm not turning any penny away. You might say I'm an equal-penny opportunist.)
When I was 14 (so close to 13, but not), my family went to Las Vegas on Friday, July 13 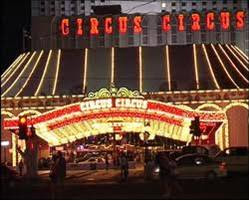 . The hotel Circus Circus had just opened and kids could get beyond looking in the front window. (Trust me; it was 114 degrees when we were there in July. I remember peering in those front windows with sweat dripping off every pore of my body while our parents --in the cool, air-conditioned casinos --put a couple nickles in some slot machines so they could say they gambled in Vegas.) So it was pure paradise when we could walk around by ourselves in Circus Circus on the upper floor. I remember being able to look down on the casino floor and wave to the parental units who were, again, putting nickles in the slots. Not big gamblers, my parents. 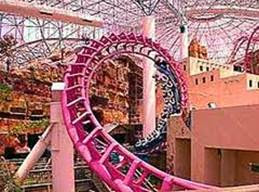 f you've never been, or if it's changed since 1979, Circus Circus's upper floor was full of carnival-type games. Kewpie dolls, balloon darts, water gun races, pennies in milk bottles, that sort of thing. I can't remember what game it was, but it was the first one I played and I WON! Some weird stuffed animal that I've since lost, but I won in Vegas! Seriously I was the happiest kid in the place. My siblings were a tad jealous, but who cared? I was a winner in Vegas! That sealed the deal on Friday the 13th being a lucky day for me.

Ever since, I make sure to take a stab at Fate on those days. So far, I've come out unscathed. But, as someone who just put the Fates in her upcoming book, I know that I'm due for some kind of cosmic retribution.

I just wish I had that weird stuffed animal I could offer to the Fates as recompense.

Here's a Fates' scene from Magic Gone Wild which comes out August 1. The set-up is: Genie Vana has just committed a big sin in the djinn world and the Fates are holding her accountable.

“Are you kidding me?”

Vana blinked when the world around her slowed its spinning, but the cackling voices kept harping.

“I told you she couldn’t do anything right.”

“This is going to be a nightmare to clean up.”

Vana put out a hand to steady herself. Her fingers encountered a rock.

She looked up in surprise—and got an even bigger one.

Three old crones were staring at her. And not just any old crones, but… Holy smokes! The Fates.

“Do you realize what you just did?” asked one, using their shared eyeball to glare at her. Lachesis.

“And now we have to fix it. Again,” grumbled Clotho, the hunched one.

Atropos was sharpening her scissors on a strap, flashes of lightning glinting off the blades.

It was a dark and stormy night on Mount Damavand, portentous weather for being summoned by the three sisters.

Not that there was ever a good time to be summoned by the Fates.

Lachesis thwacked her staff on her palm like a metronome, and lightning punctuated each downbeat. A clap of thunder struck the air. “Would you care to tell me what made you do what you just did? You’re not normally a stupid girl.”

“Sure could have fooled me.” Clotho leaned on her cane. Her knitting needles hung from a chain around her neck. A woven chain, as befitted the weaver of the Threads of Life.

Atropos, the one who cut those threads, kept sharpening her strap. “Well? What do you have to say for yourself?”

“You shouldn’t have pulled me out of there. I need to explain it to him. Tell him why I did what I did.”

“Look here, missy.” Clotho grabbed the eye from Lachesis, popped it into her socket, blinked twice, then glared at Vana. “You have been nothing but a stitch in my side for the past four days.” She stabbed the space between them with one of her needles. “First, I have better things to do with my time than unravel and reweave the threads you’re flinging all over the place as if it were bargain day at the mall.” Stab, stab.

“You think it’s easy, keeping everyone’s lives running smoothly? You think it’s a walk in the park to make sure I’m not doubling back on something that’s already happened in someone’s life because you got it into your pretty head to time travel an hour or two every few days?” Now she waved the needle around like a wand.

“Do you know how much people’s lives are affected by choices other people make? Do you have any idea that those six steps to Kevin Bacon mortals laugh about are no laughing matter?” And now she was back to stabbing. “Weave and reweave, knit one, pearl sixty thousand. I’ve got enough on my plate without you acting as if Time were your own personal plaything, and I”—stab—“for one”—stab—“am damn sick and tired of having to clean up your messes.

“And as if playing with fate and time weren’t enough—” She leveled the needle in front of her like a jousting lance. “Now you go and do something that not one of us decided for you. Hauling off and tossing an ‘I love you’ onto the playing field? That is so far beyond a foul, you’re lucky we’re not throwing you out of the entire game.”

“Then why did you put him in my bottle?”

“What? Are you out of your mind? We would never do something like that, and don’t you dare try to palm this off on us, you ungrateful wretch.” Clotho went back to stabbing. “You are on my last nerve, Vana, and, with us Fates, that is not a good place to be.”

And regarding luck, every year RWA announces the lucky Rita and Golden Heart finalists. This year, those announcements will be made next Monday, March 26. I'll be hosting my annual "squee" blog party at www.JudiFennell.wordpress.com. I'd love to have you all stop by and join the party for those lucky folks!