FORTUNE IS FICKLE...EVEN UNTO HER OWN... 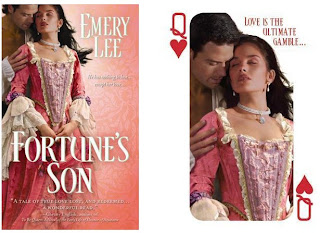 While luck is a key element of gambling,
Lady Luck is also best known for her caprice.

Excerpt from my SIBA and TRR award nominated FORTUNE'S SON


She had staked only twenty guineas and already had thirty. Her breathing quickened in anticipation of the next turn of the cards. The tallière flipped the nest two in quick succession, the three of spades and the four of hearts. “Three wins, four loses.”
She exhaled in relief.
He dealt again, “Queen wins. Knave loses.”
“You have won again, my lady!” George cried.
“But it was so easy!” Susannah gasped in delight, receiving resentful looks from anguished punters groaning as the croupier swept to the bank any coins resting with a knave.
“You are exceeding lucky, my lady of hearts. Do you wish pay or paroli?” asked the tallière once more.
Her breath hitched at the decision. She turned to George, “Did you not say that with quinze-et-le-va, the payout is a full fifteen times my stakes?”
“Indeed so, but now with only two queens remaining in the deck, the odds do not favor you.”
“Nevertheless, Mr. Selwyn, being a creature of caprice, I am resolved to follow my fancy.” Heedlessly brushing aside all her reservations and every warning Philip had ever spoken, Susannah wagered several more gold coins and crooked the second corner of her card.
“You’ve bollocks of brass, my lady!” George exclaimed, too lost in the moment to guard his speech.
Susannah, paid him no heed, his voice had long since become little more than a buzz in her ears. She’d stayed with her lucky queen and the impulse had paid off with seven hundred guineas now on the table divided between the queen and the ace. Her mind was a flurry of calculations. If her good fortune continued, she might garner enough to live out her entire life, not just a woman of independent means, but one of substantial wealth.
She held her breath, and her hands clenched the table’s edge as the tallière turned over the next two cards, the ace of spades, and the three of diamonds.
“Ace wins, three loses.”
“Good God!” Selwyn slapped the table. “You’ve done it again! You’ve the devil’s own luck tonight!”
With her pulse drumming a deafening tattoo in her ears, Susannah dumped the remains of her purse onto the table, splitting it between the queen and the ace, the sum of her two wagers now totaling nearly a thousand guineas.
Recalling his promise to Philip, George was reluctantly moved to intervene with a staying hand. “Mayhap you should consider the payout. I’ve yet to see anyone surpass trente-et-le-va.”
With her eyes glimmering and her voice breathless, she answered, “Did you not study Virgil, Mr. Selwyn?”
He looked chagrinned. “I’m afraid I left my studies a bit precipitately.”
“Fortune favors the bold,” she quipped over-brightly. She bent her card just as Philip’s ominous warning came unbeckoned into her head - Luck tires as surely as the player.

ABOUT EMERY LEE
Whether historical fiction or historical romance, self-professed Georgian junkie Emery Lee loves nothing more than crafting emotionally compelling stories that bring the past vividly to life.  Her debut novel THE HIGHEST STAKES, is an epic tale of star-cross lovers set in the high stakes world of 18th century horse racing. In FORTUNE'S SON, Emery spins a web of drama, passion, and deceit, deep in the world of high stakes gaming.

"Lee brings the atmosphere of the Georgian era to life with lush descriptions that beg the reader to see, hear, feel and touch it all....with a lively cast of characters and surprising twists and turns that are reminiscent of Fielding’s Tom Jones or Defoe’s Moll Flanders."-RT BOOK REVIEWS