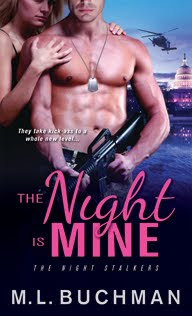 “The Night is Mine” – Book #1, February 2012 from Sourcebooks/Casablanca

Vampires? No! Serial Killers? Nuh-uh! The Night Stalkers is their own name for the real-life U.S. Army’s 160th Special Operations Aviation Regiment, SOAR. They fly the nastiest helicopters ever to cross the night sky. Their mission, to transport and protect Rangers, SEALs, and Delta Force operators while they’re fighting in some of the worst places you can imagine. We rarely hear of their successes (Grenada, Panama, bin Laden) because of their secrecy, and only rarely of their failures (Takur Ghar in Robert Redford’s “Lions for Lambs”, Mogadishu “Black Hawk Down”), partly because they have so few failures and partly because even during those two disasters, they achieved incredible tasks under impossible conditions.

A romance series? Oh yeah! Once I’d discovered these guys I just had to write about them. And what better way to stir things up than to drop a strong woman in their midst and watch them twitch. Of the many avenues available to a woman in a man’s world, Captain Emily Beale has chosen perhaps the simplest, she is flat out better at it than any man around her. Is she a super-woman? No more than the men she flies with, except she does it as a woman. (Well, maybe she’s a little better, but I love the triumphant underdog. The Harry Potter or Jack Reacher or Isadora Dudley Peabody from Susan Wiggs’ “The Charm School,” that no one in their right mind would ever bet on.)

This book took four years to reach this point. It began as a consciously chosen idea, versus the ones that just fall out of the sky and land on me like a giant bag of… well. I discovered SOAR while researching a woman who showed up in my foodie thriller “Swap Out!” Plop! She landed a secret helicopter in the middle of a rescue of the nation’s top television chef who was being hunted by U.S. Special Forces. Suddenly I had a problem, I had a female warrior and a military helicopter, and I knew nothing about either. Over the next year, in between and around writing, I did an immense amount of research. A couple of dozen books, several movies, a couple of magazine subscriptions, and half a hundred websites.

The first thing I really discovered is that SOAR barely exists, at least in the public’s eye. Yet they have a presence that spans the globe despite their small numbers. And when they do fly, they’re still invisible. Of the dozens of articles I read about the helicopters on the bin Laden mission, all but one merely said U.S. military or U.S. Army. Only one said SOAR, an article in the industry magazine called “Defence Helicopter.”

The second thing I had to learn was how these folks think. These are career fliers. They have to have a minimum of 5 years experience and volunteer 5 times (Army, Special Forces, Rangers…). If, and it’s a big if, they make the grade, they then have a minimum of 2 years more training before they’re considered mission-ready to SOAR’s standards. These fliers of this invisible regiment are the rock star celebrities of aerial flight. I spent far more time researching warrior attitude than I did helicopter mechanics or SOAR themselves. That’s what hooked me. These folks are magnificent, dedicated far beyond my mere civilian understanding. When I had the chance to interview a woman who flew as a Black Hawk mechanic / gunner for the Screaming Eagles in Iraq, I was humbled by her simple calm and focus. She was still a long way from SOAR.

Then along came Deb Werksman, my amazing editor at Sourcebooks, who decided that she loved my story as much as I did. Enough to nurse it through several drafts to take it from the thriller it started as to the romance I'd been trying to achieve. I love this book and can't mention it without gratitude for Deb's amazing insights to help me tell the story I set out to tell.

I wanted to make this a fun story, a joy to pick up and a disappointment to put down. I strove to entertain and to amuse, for after all, that is the call of the craft. But I hope I also communicated some of my awe. These are very real people doing incredibly real missions. What I wrote is nothing compared to their reality. Think of it as Socrates shadows of firelight on a cave wall. I reached into their world and pulled out a romance that but reflects them. Reflects them upon my heart and hopefully upon yours as well.

Thanks, ML “Matt” Buchman
To find out more about the book and my thoughts on writing, you can follow my blog tour all month, where I've been and where I'm going, at www.mlbuchman.com.

THE NIGHT IS MINE BY M.L. BUCHMAN

MISSION: Fly undercover to prevent the assassination of the First Lady, posing as her executive pilot.

Protect the lives of the powerful and the elite at all cost. Neither expected that one kiss could distract them from their mission. But as the passion mounts between them, their lives and their hearts will both be risked...and the reward this time may well be worth it.

M. L. Buchman has worked in fast food, theater, computers, publishing, and light manufacturing. It's amazing what you can do with a degree in geophysics. At one point he sold everything and spent 18-months riding a bicycle around the world. In 11,000 miles, he touched 15 countries and hundreds of incredible people. Since then, he has acquired a loving lady, the coolest kid on the planet, and lives in Portland, Oregon. For more information, please visit http://www.mlbuchman.com/.