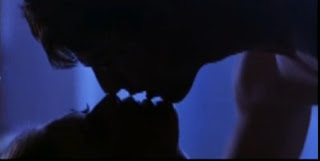 A number of months ago, I was the guest speaker at my college roommate's book club. While we talked about the book, one of the members - the cutest little thing, with punky platinum hair that took me back in time [mumble mumble] years - revealed that while reading TASTE ME, she and husband had... a lot of sex. An unusual amount of sex, most of which she'd initiated. "I'd read a chapter or two, turn over and tap him on the shoulder, and...whoa, Lordy, it was ON."
After the group finished laughing, she continued her story. One night, when she and her husband were getting ready for bed, he gestured to the book, lying on her bedside table. "Aren't you going to - you know - um, read?" he asked. Instead of doing so, she paged to the book's first love scene, and passed the book to him. "Why don't you?"

So, he read. When he finished the scene, he closed the book, turned off his light, and settled down to sleep. "And...nothing!" she told us, throwing up her hands. Finally, she had to ask him. "Isn't that about the hottest thing you've read in your life?"

He shrugged. "It was okay, but there was hardly any sex."

After we refilled the wine glasses - again - we had a very interesting discussion about sex scenes and love scenes, and the degree to which gender might account for the differences in expectations, perceptions, and reactions while reading them. Punky Reader opined that she'd responded to the ramp-up, to the slow build in sexual and emotional tension. "But he seemed to be looking for..."  She made a lewd hand gesture. "Tab A/Slot B."

One thing this conversation drove home for me is that, for all the sexual tension I try to convey in my work (even Romantic Times described TASTE ME's heat level as "Hot") there's really not a lot of explicit sex in my love scenes. As a writer, erotica's outside my comfort zone, but as a reader? Definitely not. Sometimes Tab A/Slot B (or, um, Tab A/Tab B/Slot C) really hits the spot. 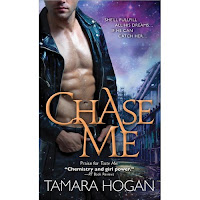 Tell us about your favorite love scene(s). What is it about the scene that appeals to you?

And speaking of heat!  Here's a peek at the drool-worthy cover of my June 2012 release, CHASE ME. If werewolf geologist Gabe Lupinsky were to pose in his employer's parking lot wearing a leather jacket and no shirt, I'm sure he'd choose a classic style like this. ;-)

Huge thanks to Aleta Rafton for another fabulous cover.