By Sidney Ayers January 30, 2012
To be honest, a new beginning is what I need.Despite the release of my debut novel DEMONS PREFER BLONDES in June and the sequel, DEMONS LIKE IT HOT, in December, 2011 was a year that isn’t worth repeating. Several family dilemmas and emergencies really played the ringer on my writing mojo. I come from a rather close-knit family, so when they hurt, I hurt with them.


My sister became ill and that found me in the middle of helping my mother transport children here and there, to school and other various events. Things seem to be on the up and up on and my sister is on the mend, which I am truly grateful for.

Then, the day before thanksgiving, my other sister’s cat was fatally mauled by two pitbulls whose owners thought it would be funny to watch their dogs attack a poor defenseless cat. My mother and I arrived right after the incident. If only we had been there a few minutes earlier. We found the cat cowered in the corner scared out of its mind and in shock. We rushed him to the vet, but they couldn’t save him. The vet tech said it was the same type of injury seen with shaken babies. There were witnesses and we managed to track down where they lived and filed a report, but it looks like these delinquents are going to get away with it. I’m sure eventually they’ll get their comeuppance.

I’ve also been toying with the idea of returning to school to finish up my degree. In this economy and the job market in such a rut, most employers won’t even look at your resume without at least a BA. I have an associates, but in this day and age, it really doesn’t get you far.

So as 2012 rolls around, I’m all for new beginnings. Be it a new line of employment or returning to school. Either way, it’s something I need to do. 2011 just helped me put it all into perspective.

To celebrate some new beginnings, I present you with my newest cover for my December 2012 release, A DEMON TO DIE FOR. This is the third book in the Demons Unleashed series and it stars demoness Kalli Corapolous and Cardiologist Dr. Joshua Carlson—who ends up being a little more than human. 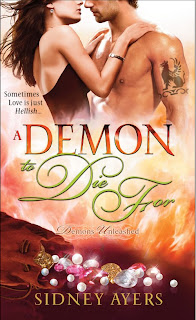