The Danger that is Damion

By Lisa Renee Jones January 26, 2012
Happy 2012 everyone!
I know I'm getting old because I already month of 2012 and it feels like days. I blinked and it's gone. I am going to blink and it will be RT Convention time too. RT is in Chicago this year and I was born in Springfield and have tons of family up that way. I am really excited to get to see them all. I hope I will get to see many of the Casablanca authors there and meet a lot of the readers I talk to on twitter, facebook, and yahoo groups. And what timing -- Damion is out right after RT!

Since we are beginning a new year, I thought it would be fun to share the first impression the heroine from THE DANGER THAT IS DAMION makes on Damion. 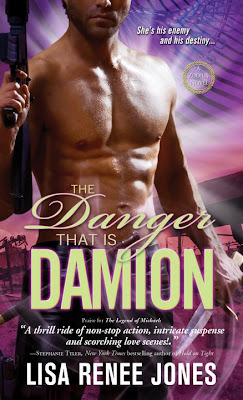 Coming in May!
**Note-- blogger wasn't playing nice with me. It keeps centering the excerpt. So my apologies that it's not aligned a bit nicer.
THE DANGER THAT IS DAMION

ZODIUS #3: THE DANGER THAT IS DAMION

Pre-order at Amazon|Barnes and Noble

General Powell from book 1 has returned and he’s developed a way to create and control a new generation of female GTECHs. He plans to use these women to bring both, the Renegades and the Zodius soldiers, back under his command. The world will be his. Now, Damion, a Renegade, who readers met in book two, will be pitted against one of those soldiers, a woman destined to be both his Lifebond and his enemy. Damion will become her only hope of salvation and their trust in each other the only chance they have to save the world from a madman.

Read on for an Excerpt:

The Danger that is Damion Excerpt

There was nothing unusual to a casual observer about a hot woman in a white string bikini, lounging poolside, a few feet from where undercover Renegade soldier Damion Browne leaned against the cabana-style bar, a beer in hand. In fact, from a purely male standpoint, there was absolutely everything right with this particular woman, a brunette with long, silky, dark hair brushing creamy white shoulders. But then, he was on duty, and he took that duty too seriously to allow primal urges to distract him. Still…something about this woman set his blood to pumping, and like it or not, that translated to a distraction that was out of character for him.

He told himself it was because she’d shown up ten minutes into the outdoor excursion of a Russian nuclear scientist, and his family, that Damion was covertly ensuring didn’t end up in Adam Rain’s arsenal of weapons. The he last thing the Renegades wanted was the leader of the Zodius GTECH movement getting his hands on the nuclear technology Lev was selling the United States in exchange for citizenship.That’s why this woman was a potential risk, he told himself, not because she had long, shapely legs that belonged wrapped around a man’s waist–his waist, Damion thought, with a rush of pure male heat. They belonged around his waist. Damn. What was wrong with him?

Inwardly, he shook himself, not sure what it was about this woman, but she could easily drag him into the linger zone when he didn’t go to the linger zone on duty. Scratch that, he thought, as he glanced at Lev and family, and back to her, she already had him in the linger zone, and there was no forgiving his distraction unless… That gnawing gut feeling was telling him that underneath all that sex appeal, she was trouble, despite Adam’s dislike of female operatives. Add that to the fact that the CIA team watching Lev had allowed him outside in the first place, and Damion had a bad bad feeling about this. Suddenly, as if she sensed his suspicions, the dark-haired beauty’s head snapped in his direction, her attention settling on him, her eyes shielded by white-rimmed sunglasses. Time stood still for an intense, crackling moment. Certainty filled him. She had known the entire time that he was watching her.

The microphone tucked discreetly inside Damion’s ear hummed a second before the voice of his Harley loving, wildcard, second-in-charge, Chale Bonner, spoke, “We reported Lev’s barking dog to the front desk several times. Looks like security is headed his way. We’ll have him inside the building where he’s less exposed in a flash.”

Damion didn’t reply. He was still watching the woman, who as abruptly as she’d given her attention, jerked it away. Reaching for her bag, she stood up, offering him a nice, heart-shaped, backside view, as she sashayed away. Her pace was slow, confident, but a bit too precise. She was hiding something besides the intimate details of her body, details he wanted to discover beneath those tiny pieces of white material. Adam didn’t typically work with women—he believed they were inferior beings—but somehow, someway, this one was the source of the warning in his gut.

“Alert,” Chale added. “Doggy Patrol has arrived. Get ready for movement.” Damion eyed the backdoor of the hotel to find two uniformed security guards, and a woman dressed in a suit, headed toward Lev and his brood.

“I see them,” Damion said, his gaze shifting to the fast-departing, bikini-clad female. But had she seen them? Was that why she couldn’t get away from this place fast enough?

Damion set the beer down and discreetly touched the mike hidden in his ear. “Cover Lev. Something about that woman is bothering me.” He pushed off the bar and started walking, unable to use his GTECH ability to travel inside the wind without risk of garnering unwanted attention. This woman was dangerous. The kind of dangerous a soldier, a Renegade, didn’t let escape.

Now for the question of today, what makes you pick up a book? The cover, the title, the author's name, or something else? Do you buy on a splurge or do you have a list of books you are looking for and rarely stray? 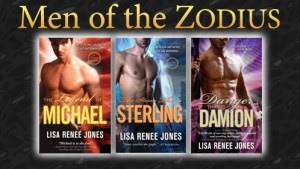