Tall, Dark and Available at a Bookstore Near You! 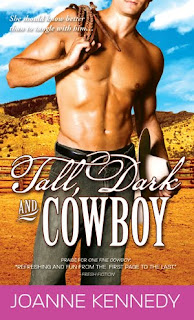 Today I'm celebrating the launch of my fourth book, Tall, Dark and Cowboy. I'm always excited when a new book hits the bookstore shelves and slides on into the e-readers. I feel like my characters have finally been set free as they come to life in the minds of readers.

Not only will readers finally get to meet former trophy wife Lacey Bradford and cowboy Chase Caldwell; they'll also get to know Sinclair, the world's ugliest dog; Cody the wildman/four-wheeler/short-order cook; Fletcher Galt, the crotchety neighbor who's as accurate with a shotgun as he is with a well-aimed insult; and all the other denizens of Grady, Wyoming.

When Lacey arrives in Grady, she brings nothing but the beat-up muscle car she drove in high school, an ugly stray dog she found at a gas station, and a philosophy of life defined by the motto W.W.S.O.D. ("What Would Scarlett O'Hara Do?"). The rich man she married turned out to be a crook, and rather than live off his ill-gotten gains she's left everything behind. 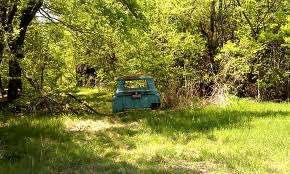 She's hoping her old friend Chase Caldwell will help her get a new start, but the gangling farm boy who loved her all through high school has changed into a caustic cowboy hardened by bitterness and loss. "Fiddle-dee-dee" will only get you so far, and it's going to take all Lacey's Southern charm to convince him to trust the first girl who ever broke his heart. 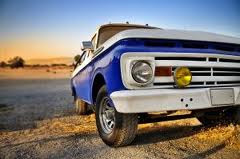 When Chase refuses to offer a helping hand, Lacey decides to help herself--and he can't help but admire her determination as she builds a new life at the heart his adopted community. When real danger follows her trail, he can't resist helping a damsel in true distress. But can she really trust a man who turned her down when she needed him most?

Advance reviews have made much of the sexy scenes where Chase and Lacey get together. So I thought I'd offer a little taste of cowboy heaven in a teaser excerpt to get your Wednesday morning off to a sizzling start.
***

Lacey loved to kiss. She was good at it, too, having spent her entire high school career at first base. She hadn’t given herself to any of the groping, grasping boys who’d tried to steal second in the back seats of their cars, and she’d become expert at parrying their stealth moves—the slow hand creeping under her shirt, the subtle tug that signaled an attack on her bra strap.
But Chase wasn’t trying to steal anything. He didn’t seem to be thinking about the usual male goals and aspirations like seeing her naked or working toward his own satisfaction. More than any man she’d ever kissed, he was in the moment, making the most of every touch, every stunned intake of breath, every whisper of sensation.

She knotted her fingers behind his neck and gave herself up to the sheer pleasure of his touch. Pressing her breasts into his chest, she tried to smother the sharp ache of longing for more, harder, now, but he was so tall she couldn’t plaster her body to his quite the way she wanted. She twisted against him and hiked herself up on her toes, letting out a little mew of frustration.

Suddenly, his arms enfolded her as he hoisted her up on the truck’s open tailgate. S 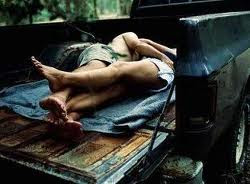 he wrapped one leg around his waist and deepened the kiss with an aggression that would have shocked Scarlett out of her sweet Southern senses.

Chase seemed to sense her need as he cupped the back of her head and lowered her onto the hot black plastic of the truck’s bed liner in one swift move. Now their bodies were aligned his weight pressed down on her, finally giving her some relief from the ache of need that was pulsing in her breasts and between her legs. She brought one foot up to stroke his calf and wondered when she’d lost her shoes, but she’d never cared less about fashion than she did now.
In fact, all she wanted from her designer duds at this moment was easy removal.
***

As you may have noticed, that scene takes place in the bed of a pickup truck, parked by a babbling brook in the middle of Nowhere, Wyoming. Chase and Lacey are probably my most imaginative couple yet when it comes to finding off-beat opportunities for a little lovemaking bliss. And that leads to my question of the day:

What's the most unusual place you've ever kissed/made out/made love? If it's a car, I want make and model. Otherwise, just dish on a few select details!