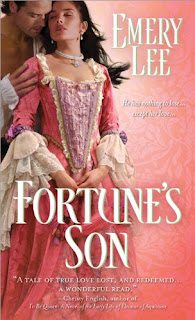 Love is the ultimate gamble…

Seasoned gambler Philip Drake knows every trick and uses most of them. After years of infamy, he’s ready to accept the mantle of respectability with his earldom— until a devastating racing loss and the threat of debtors’ prison force Philip right back into his gaming ways…

Susannah, Lady Messingham, is a woman with a past who refuses to belong to any man again. But Philip’s skill catches her eye and she persuades him to teach her how to win at the tables. Their new partnership turns into an exhilarating high-stakes game that entangles them in terrifying risk and unimaginable rewards…

Immerse yourself in the risky side of Georgian England with a pair of lovers who aren’t afraid to risk it all on a toss of the dice...

When I began writing FORTUNE’S SON,  I was obsessed with capturing the tone and excitement of the Georgian gaming world.  Second only to creating an intense chemistry between Philip and Lady Susannah, my greatest desire was to completely immerse the reader in their world.


You cannot even imagine how I shook when I read my first review:
“Lee brings the atmosphere of the Georgian era to life with lush descriptions that beg the reader to see, hear, feel and touch it all....with a lively cast of characters and surprising twists and turns that are reminiscent of Fielding’s Tom Jones or Defoe’s Moll Flanders."  -RT Book Reviews

Now, I bid you all welcome to the Georgian gaming world of FORTUNE’S SON:
~
The Rose of Normandy Tavern, Marylebone Pleasure Gardens, 1739

“Seven’s the main!” the young gentleman called out in a voice pitched with anticipation. The vibrantly hued flock of velvet-clad gentlemen and silk-draped ladies surrounding the table watched with rapt eyes glazed and breath bated as, with a long-practiced flick of a hand, he cast the ivory cubes from the wooden box onto the round, bevel-edged table. The dice clat­tered to a halt, rolling up six and one.

“Damme, nicked again!” The central hazard table resounded with the low curses and shrill cries of dismay from its punters. Others at surrounding tables hovered with solemn concentration over their cards, while the proprietor, Daniel Gogh, surveyed the scene with pride and satisfaction. Surely the  ridotto al fresco to open the new Marylebone Pleasure Gardens would be touted the event of the season. The varied diversions of the evening had included an organ concerto by Mr. Handel, a performance by the noted violinist Knerler, and illuminations at midnight, topped  off with a late supper inside the Rose of Normandy tavern.

Hours later, the gaming rooms still buzzed with activity: the resonating clink of champagne glasses, the echo of gay laughter, and cries of anguish and triumph interspersed with the spinning E-O wheel and rattling of dice boxes.

At one of the tables, a young gent of no more than twenty, with all of the affectations of a town beau, remarked to his equally raffish companion, who had cast the dice, “You’ve the devil’s own luck tonight, Drake.”

“Don’t I though?” his cohort replied with a wolfish grin as he raked in his winnings. “I should advise you, Bosky, that your money would be better placed on the next cast, rather than trying to set me.”

“Will you never drop that infernal sobriquet? Moreover, that’s the third nick in a row! What were the odds of that?” He lowered his voice and added a pointed look. “Might I warn you that I am not the first to wonder about those dice of yours?”

Philip Drake’s sharp eyes narrowed, losing all trace of good humor. “What are you implying, my friend?”

“Simply to take care if you are up to any tricks. You might take particular heed of that burly fellow with the broken nose.” George Selwyn slanted a warning look across the table. “He looks like a bruiser, and none too pleased that you have so singularly defied the odds this evening.”

“Don’t tease yourself further, Bosky. I doubt my good fortune will continue. The odds, as you so succinctly stated, are against it.”

“Nevertheless, I think you’re up to some mischief to which I won’t be a party.”

“I’ve heard that before, but suit yourself.” Philip tossed another five guineas onto the table, doubling his stake. The groom-porter announced the new odds, but as he reached for the dice, a low and husky feminine voice stayed Philip’s hand.

“Might I yet place my stakes, gentlemen?” she asked. “I’d like to wager with the caster. He appears an uncommonly lucky young gentleman.”

“The rules permit you to wager on or against the caster, madam,” answered the groom-porter.

Philip looked sharply up from the dice, meeting a pair of eyes as deep and brilliant as the emeralds she wore. Though much of her face was concealed behind a domino, her mouth was well-formed and as lush as her figure, which was generously displayed by the low-cut gown. The sum effect would cause any but a blind man to stumble.

Philip wasn’t blind, but he was for a moment stunned. Who the devil was she?


***
She had watched him with fascination from across the room. He was a cool one, indeed. While others at the tables cursed and shouted with every cast of the dice or unlucky turn of the card, the only trace of emotion displayed by the young man at the center of the hazard table was a slight upward tilt of his lips as the croupier paid out his winnings. His movements were always deft and self-assured, as if the dice were his to command.

After a time, she nudged Lady Hamilton to ask, “Jane, who is that young gentleman over there at the hazard table?”

Jane, Lady Hamilton, squinted. “That would be George Selwyn.”

“No, it’s not George, but his companion, the one pres­ently holding the dice box, whom I inquire after.”

Jane’s eyes narrowed again, raking the young gent appraisingly. He was taller than average and uncom­monly well-proportioned. His complexion was dark and his features strong rather than regular, with a determined set to his jaw and a sensuous mouth, but the intensity of his dark eyes was most arresting.

“Hmm. I know him not, but he cuts quite a dashing figure. I think I now comprehend the nature of your curiosity. Surely a cut above a hot brick to warm a young widow’s bed. But don’t you think him a bit… fresh… for a woman of your years?”

“I’m hardly in my dotage!” the younger woman protested. “Besides, you misapprehend my interest. I only observe his uncommon skill at the tables. It appears he never loses.”“It is purely his skill you admire?” Jane’s indulgent smile bespoke her utter disbelief.