Falling in love...in the face of tragedy and having that love give you hope and new lifeo 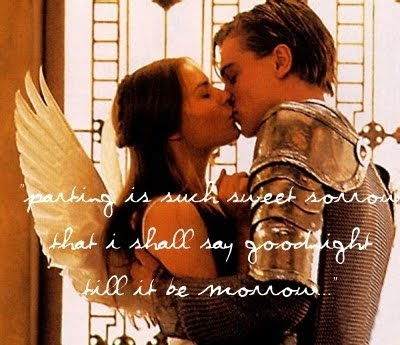 What do you do if you fall in love with someone you can't have for one reason or another? We've seen these stories throughout time and they are often gut wrenching and painful. Romeo and Juliet is the ultimate story of love that is lost, but love you cannot live without. The movie Titanic spoke to many of us because of its portrayal of one new love found and lost in the midst of a great tragedy. But there are those stories of forbidden love, or love that seems destined to fail, that deliver a happily ever after.

In THE STORM THAT IS STERLING my heroine has a rare, incurable cancer. She also has scientific skill that is impressive enough to make the bad guys willing to save her -- for a price -- a drug addiction that will kill her if she ever stops taking it. And she can only get that drug from the bad guy.

Sterling and Becca -- the heroine -- knew each other years before this. He started falling in love with her then but they were separated. When she escapes the bad guy and is near death, he saves her. He then falls in love with her, hard and fast. He's going to save her, he's going to love her. He doesn't care what the odds are. He doesn't care who thinks she might be working undercover for the bad guys. Somehow, someway, he will find a way to make this woman his. If, that is, he can win her heart, as she has his. 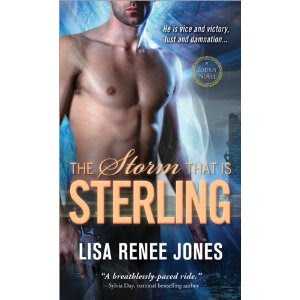 Coming in November 2011
In bookstores and in e-book!


THE BOOKLIST REVIEW....
Nov 2011. 384 p. Sourcebooks/Casablanca, hardcover, $6.99. (9781402251597).
The exciting Zodius futuristic suspense series features soldiers enhanced by a GTECH secret military experiment. Sterling Jeter, who is assigned to guard Rebecca Burns, the scientist working on an antidote for the highly addictive and fatal drug ICE. But Rebecca is also the high-school dream Sterling was never able to realize. She has cancer and tangling with bad guys who want her science skills for their ends has left her an ICE addict, too. She wants to take advantage of her time left with Sterling, while Sterling wants to protect her. As danger mounts, they try to sort out who is trustworthy. The GTECH and science details can best be followed with the help of the index, but they do not overwhelm the appealing characters or action. Jones’ suspense truly sizzles with an energy similar to FBI tales with a paranormal twist by Julie Garwood or Suzanne Brockmann. Alpha, military, and paranormal romance readers will want Jones’ entire series.

He may be invincible to everyone else…

Sterling Jeter has remarkable powers and has shown himself
to be just about indestructible. But beautiful, brilliant Rebecca
Burns knows that even a Super Soldier needs comfort, and so
much more…

But she can see that deep down,he’s just a man…

Sterling and Rebecca’s teenage romance was interrupted,
but years later the heat between them flares back to life.
Even though it endangers everything they’re fighting for, it’s
impossible to resist picking up right where they left off…

His cheek brushed hers, whiskers erotically scraping against her skin, his breath warm against her ear as he whispered, “If I instinctively know something so simple as how to order your dinner, think what else I might know about you. What we might know about each other. How to tease each other… How to please each other.”
There was an emptiness inside her that shuddered with hope, with a plea that he would drive it away, fill it with something that wasn’t icy and cold.

He pulled back and looked at her, his eyes dark, passionate. Compelling. “No regrets, Becca,” he vowed, and she knew he’d found those words in her head. Words she’d sworn to live by when she’d left that German hospital without a cure. Words she’d spoken in her head in the lab earlier with him there.

She rolled them around inside her and let them take root, rewarded herself with a deep inhalation of Sterling’s addictive, masculine scent. “No regrets,” she said softly.

A slow smile formed on his lips. “I love it when you agree with me,” he teased.

“About you,” he said huskily.

She felt a little schoolgirl rush from that. In the past, she would have felt like the geeky bookworm with the quarterback, uncomfortable and out of her league, but not with Sterling. Never before had a man taken her from such dark emotions to laughter. A place she might just find real escape.

She pressed her hands to his face, her lips to his. Absorbing him. Breathing him in like a little piece of life. They lingered that way, heat simmering between them. Expanding… drawing them in closer to one another without ever moving.

His tongue flickered against her lips, pressed past her teeth as he slid it against hers for a long, sensual taste. “Your kisses taste like honey,” he murmured. “What does the rest of you taste like?”

Her palms traveled over his chest—warm, hard muscle, her reward. She was extremely, intensely interested in those muscles, like the best science project in the world that had to be studied. She explored his arms, his biceps, how they felt beneath her palms. Inching forward in her chair, she arched into him, for research purposes, of course. To explore how he would feel pressed close to her. Her breasts ached for his touch, her nipples tight and swollen, in need of his mouth. God. Had she really just had that brazen thought? She was a good girl; she always had been.

His hands slid over her breasts, fingers teased the stiff peaks of her nipples. Her hands covered his, silently telling him she wanted more, because she couldn’t ask or demand. Because she was still that “good girl” at heart and couldn’t seem to let it go.

But she didn’t want to be a good girl. If anyone knew the meaning of “life is short,” she did. Becca ran her lips over his jaw, hid her face in his neck, and nibbled as she said, “You know what I want?”

He slid his hands around her waist. “If you say Chinese food, I’m going to object.”

“I’ll give you a choice then,” she said, feeling braver with his jest. “Feed me, or take off your clothes.”

“I’m all for getting naked, if you are,” he quickly agreed.

“You first,” she bargained.

And while the idea of standing in front of him naked, him fully clothed, would make her feel vulnerable, exposed, it apparently had none of those effects on him.

“Okay,” he said, unaffected by the idea as he pushed to his feet and started undressing. And only seconds later, he stood there in all his naked glory, and she sat there, fully clothed.

Visit me for more excerpts at www.lisareneejones.com and myself, Jaci Burton, and Shiloh Walker, have a fun contest to win a NOOK in celebration of our November releases. So I will have that announcement on my blog with a countdown widget and details to win next week!