Why bad boys are so hot


So what exactly do Eric Northman (True Blood), Tim Riggins (Friday Night Lights) and Don Draper (Mad Men) have in common? Besides being hot? 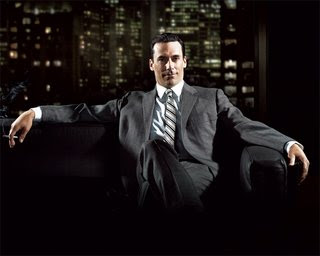 They're all bad boys.

We all know there's just something about that bad boy. The best heroes in romance novels all have a bit of bad-boy in them. Why the enduring appeal?

1. The element of danger. With a bad boy, you never quite know what you're going to get. He's unpredictable. There's a risk in placing your trust with him because you're not totally sure he's worthy of it. I mean, deep down you know he is...right? He doesn't conform to society and makes no apologies about it. He's exciting and adventurous and he ups the thrill for whoever he's with.

2. For the right woman, he is redeemable. Everyone else sees him as a rogue, a danger, someone to beware. But for just the right heroine who can see the good at heart, he is loyal and fiercely protective. Who doesn't want that bit of ego-trip to know they've achieved the unattainable?

The trick to a bad boy is making sure he has just the right touch of good. Because that's a hero we can fall in love with.

And since we're on a theme of hot, it doesn't get hotter than bad-boy Joe Rafferty in the kitchen

from Amanda Usen's upcoming SCRUMPTIOUS (January). I have an ARC to give away for one lucky commenter. Just tell me who's your favorite bad boy and why.

More about SCRUMPTIOUS:
Joe Rafferty is just as mouthwatering as the food he cooks. But if he thinks he’s going to waltz in and take over her kitchen, he’s denser than a thick slice of chocolate-ripple cheesecake. Marly has invested too much of her life in Chameleon to hand off the restaurant to someone else—especially a cocky-as-all-get-out superstar chef. But there’s no denying the man knows how to light her fire. Question is: Can she have the sizzle without feeling the burn?