Is it hot in here? by C.H. Admirand


I’m on deadline with book three of my series: The Secret Life of Cowboys and Deb just emailed the cover to me a few days ago…isn’t he hot???  Don’t you just love the pickup truck? 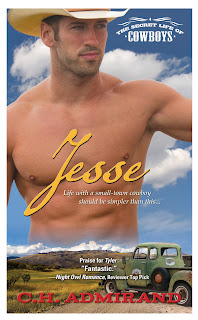 But then again...Dylan's cover is pretty hot, too! 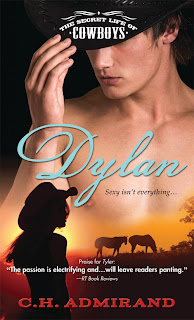 But to be fair...I really loved Tyler's too. So many hot cowboys...so little time! 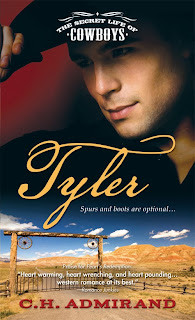 Since the second book, Dylan, comes out in January, I wanted to share an excerpt. (it's G-rated):
Dylan Garahan narrowed his gaze trying to focus in the glare of the spotlight, searching the crowd for her face. It was time for the big move in his act—the show-stopper.
Where was she?
Jolene would kill him if he messed this up, but he’d made it through the last two nights and would make it through tonight. The redheaded owner of the club should have no complaints about the middle Garahan brother not keeping his word or holding up his end of the bargain. Damn the woman and her tests!
Controlling the urge to turn on his heel and walk off the stage, he dug deep and found the grit to stick it out. Hell, if Tyler could handle this job, so could he. Garahans went down fighting!
Oblivious to the adoring gazes of the women around him, he moved toward center stage, bent, and picked up the coiled rope. He looked up as a blonde, a brunette, and a redhead walked into the bar… right on schedule… but there was something different about the brunette. Maybe it was the blindfold. He struggled not to laugh, but he couldn’t keep from smiling, wondering why the cloak-and-dagger bit.
Looping the lasso in his hands, he started the slow circular motion. Getting the rhythm going until it was smooth and sweet, he raised it above his head and locked gazes with the blonde. When she nodded, he let the lasso fly, as the blonde whipped the blindfold off the brunette.
The woman’s stunned expression as the rope slipped around her upper body didn’t stop him from tugging on the rope and reeling her in. The patrons of the Lucky Star hooted and hollered, encouraging him to pull faster, but he didn’t want the little lady to trip and fall on her pretty face.
Glad that the focus of the crowd wasn’t totally on him, he gently pulled her toward him. The brunette’s gypsy-dark skin, full red lips, and almond-shaped eyes captivated him. The promise of pain-filled death in her dark green eyes, as she struggled against the bonds that held her, had his lips twitching, fighting not to smile.
She dug in her heels, but he used his strength to subdue her. Undeterred, he yanked on the rope. When her eyes widened in shock, he used her surprise to his advantage and reeled her in the last few feet. When they were a few inches apart, he tipped his hat, smiled, and rumbled, “Happy birthday, darlin’.”
Her eyes narrowed, and her nostrils flared; Dylan recognized the signs of a fractious filly about to raise a ruckus. Not a problem, he was ready. Wrapping his free hand around her, he hauled her in close, pinning her to him before she could let loose and kick him.
The crowd roared its approval.
“Let me go,” she demanded, her sweet breath tickling the hollow of his throat.
Enjoying himself for the first time since he’d hit the stage, he chuckled and bent his head closer to her full red lips. “Why?” His gaze locked with hers. “So you can have more room to do more damage?”
“I don’t like being manhandled.”
Her vehement protest didn’t deter him; he had a job to do and an act to finish. “Well now, darlin’,” he drawled, “that’s not what your friends said.”
Her eyes sparkled with temper, and her willowy body trembled with anger. Dylan’s body stood up and said hell yeah! It’d been a long time since he’d had a woman tempt him. The sultry brunette in his arms looked like she wanted to tear a few strips off of his hide… right before she killed him.
Damn, but that turned him on.
But let's be honest, hot men not only get the heroines we write about into trouble…they can get the author into trouble, too!  Those that know me know that I’m a sucker for a man with broad shoulders. Usually I prefer that he have a shirt on or else I get um...distracted—which reminds me of the time I nearly hit a tree driving home from the grocery store.
I was minding my own business (driving the speed limit) and noticed a landscaper’s truck parked on the street jutting out into my lane. As I slowed down to drive around the truck, I heard the roar of the stand-on lawnmower and glanced in the direction of the sound…my breath snagged in my lungs, my heart skipped a beat and then started to pound—a tall, broad-shouldered god of a man was pulling a white t-shirt over his head, revealing washboard abs, pecs-to-die-for—and that’s when I saw the tree!
I didn’t realize that I’d started to steer toward him (and the 150 year old Oak tree at the edge of the road) until he turned toward me with an incredulous look on his face. I cut the wheel and avoided the tree, but can’t help but wonder if he was shaking his head in disbelief at my near miss, or if he was flattered that I’d nearly wrecked my car due to the fact that I’d been hypnotized by his good looks and dangerously distracted when he recklessly stripped off his tight-white t-shirt in public. I guess I’ll never know.
Soooo...I’ve fessed up to one of my more embarrassing moments. How about you? Have you ever had a situation where a totally hot guy distracted you and you ended up in trouble?