Over Memorial Day weekend, I went to Martha's Vineyard with my husband, my agent and several of her clients for an agent/author panel at Bunch of Grapes Bookstore. A wonderful bookstore that was voted PW Bookstore of the Year in 2002. My husband went with me because in almost 14 years of marriage, we had never really had a honeymoon, so we decided this was it. The bookstore event went great, but it was my first time on a panel, and I was a little nervous. A couple of the others were too, since we had expected a dozen or so aspiring writers to attend, but it turned out to be standing room only. The bookstore was pleased and the audience was excited, and I survived my first panel, and my first TV interview. Each author had a 30 minute interview for a show that will run on the local TV station. 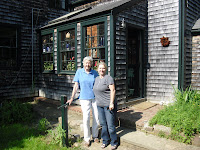 The event was set up by mystery writer Cynthia Riggs (pictured here with me), who writes the Martha's Vineyard mysteries starring 92 year old amateur sleuth Victoria Trumbull. Victoria might be amazing on the page, but in real life, her creator is the real character. I can honestly say I've never met anyone like Cynthia Riggs. She's 79, and started her writing career at age 69 when she went back to college and got a degree in creative writing. Since then she's written 10 books. She plans to write 20 books and then retire. Cynthia has a fascinating background. She has a degree in geology and has written for the National Geographic Society as well as the Smithsonian. She's lived in Antartica, been a rigger on a boatyard on Martha's Vineyard, ran the Chesapeake Bay Ferry Boat Company in DC, and lived on a houseboat there, raising her five children before moving back to her homeplace on Martha's Vineyard. 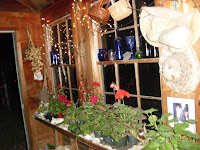 Cynthia graciously allowed the entire group of us to descend on The Cleaveland House which was built in 1750 and has been in her family for eight generations. Everywhere you look in the house, you'll find pieces of history, from a plank belonging to a ship one of her ancestors owned to books written by her mother and father, records of births and deaths, furniture that belonged to her great great grandparents. This house is the real deal, not a fancied up tourist spot. It has a functional but delightful mudroom, no TV, a vegetable garden, and Cynthia's six-layer compost heap is her pride and joy. Everything that can be composted or recycled is. She wastes nothing, never hurries, but is always moving. Several of us agreed that we want to be Cynthia when we grow up. And when you learn about Cynthia's mother, poet Dionysis Coffin Riggs, you understand where Cynthia got her strength of character. Her mother lived to age 99 and continued to go to the nursing home and read to the elderly. Never mind that the elderly were ten years her junior. She applied for a Fulbright Fellowship at age 90 but was turned down. Cynthia's father was a high school principal, which Cynthia said meant he could do anything in the world. She seemed more impressed bythat than the fact that he worked with Thomas Edison. For someone who knows little about her own family history, I was simply in awe at how rich this family's history is. 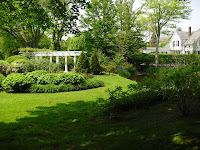 But it wasn't all interviews, signing books, and standing in awe at the amazing Cynthia. Imagine a bunch of writers, a couple of husbands, my agent's hilarious cousin, who was funnier than anything in a Stephanie Plum novel, all relaxing and having a good time. We cooked, we laughed, we pulled vegetables from the garden, and lounged by the goldfish pond, listening to the crows, which reminded me of the pet crows my brother and I had as kids. My father had rescued them when they were babies. The crows would circle in the sky and light on our shoulders or heads. The group also toured the island and spent one day at the beach. The woman who recorded the bookstore event and the interviews was also a photographer, and she was there snapping pictures of the whole visit. It was such a wonderful trip, and although the house was crowded, it was a perfect belated honeymoon. The thrilling part is that it went so well Cynthia wants this to be an annual trip for all of us. I feel another honeymoon coming on next year. 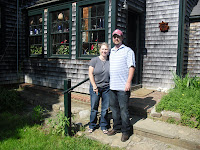 But my adventure didn't end when we left the Cleaveland House. Cynthia dropped Austin and me off at the airport, and I started feeling really dizzy. My allergies were kicking in. I was beginning to worry that the tiny Cessna airplane would not be a happy thing. Austin suggested that I go sit outside and see if the air helped. It did, but while I was out there, I heard a noise in the trashcan behind me. It wasn't the wind rattling the bag. I crept over and peered inside. There was something black and it was looking at me. A crow. I told an employee, but she dismissed it, said it would fly away. I didn't believe her, so I took the top off the trashcan. The crow tried to fly, but couldn't. I pulled the entire bag out, crow and all, and saw that it's leg was trapped by a thick rope of plastic. I went inside to the ticket agent and when I told her the crow was going to die, she said she didn't care, they were overpopulated, and it wasn't her problem. Well, then... On to the next ticket agent. She was kind and gave me her scissors and water bottle. I gave the crow some water then cut the plastic around it's leg. When I threw it into the air and it soared away, it was better than the feeling of a successful booksigning and conquering my fears of TV interviews and live panels.

Two women who had walked outside and observed the rescue were yelling, "You saved its life," as Austin the clerk cheered from inside. The women were on the plane with us and kept saying that I was meant to save that crow. When we rolled down the runway, ready to take off, there was a lone crow drinking from a puddle of water. I wondered if it was my crow. Both women were so impressed that they said they were going to buy my book. It was the perfect end to a perfect trip and the privilege of meeting Cynthia Riggs, one of the most memorable women I've ever met.