The Grande Dame of Romance 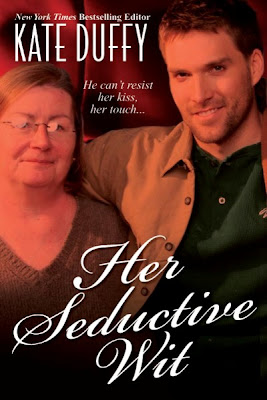 After that, we met on the patio for coffee or drinks at every conference we both attended. We rarely talked about writing. We always seemed to end up talking about her family or mine, and over the too few years I knew her we became great friends.

Kate was someone I’d call a real mench. She was the person I’d want in my lifeboat. Not only would she come up with the perfect solution to any problem, she was the kind of person who would make me laugh as we’d watch the cruise ship sink. She was direct to the point of being rude, had keen intelligence, was more generous and loving than almost anyone I’ve ever known, and had an incredible sense of humor. She was the person I’d go to when I needed a straight answer—I could always depend on Kate.

The year after I met Kate, I entered the first page of Romeo, Romeo in American Title—a writers’ version of American Idol--at another Washington Romance Writers’ Retreat. The entries were anonymous, so no one other than my critique partners and me knew it was mine. Someone would read the first page of a manuscript and the editors and agents would then comment. Sometimes those comments were stinging.

Romeo, Romeo was one of the first to be read. It was a dinner scene where my heroine’s aunt called poor Rosalie a puttana (a whore in Italian) because she’d been dating her boyfriend for two years and still wasn’t married. Aunt Rose spat the word puttana out, and as older people with dentures are wont to do, she spat a little more than just the word in Rosalie’s face.

Kate focused right in on the spittle, and I swear every entry read after mine was followed up by Kate saying “Well, at least there was no spittle in this one!”

After American Title and before I had an editor appointment with Kate, I went out to the patio to lick my wounds. I wasn’t sitting at our designated table—in fact, I was hiding. Of course, Kate was on the patio and spotted me. “Robin,” she called out. “Are you avoiding me?” I could never lie to Kate—it had to do with both of us being raised Catholic and bonding over nightmare nun issues. I said, “Yes, Kate, I am avoiding you. I have an editor appointment with you in less than an hour and don’t want to seem like I’m sucking up.”

Kate gave me the famous Kate look--she dropped her chin and raised one eyebrow. “Stop being stupid and come over here.” She slid a chair toward me. “Sit down and talk to me.” So I did. She told me about losing her beloved aunt the week before and showed me the beautiful ring her aunt had left her. She never mentioned the appointment. When it was time to go, she stood, gave me a hug, and wished me luck.

Ten minutes later I sat down at her editor table, shook her hand, and told her my story was Romeo, Romeo. I explained that I wrote my heroine in first person and my hero in third—told you I was a newbie. Then I said something like, “If I take out the spittle, will you read it?”

Kate shook her head. “No. Cut the first scene. You don’t need it. It’s funny but unnecessary. And you write in third person. Fix it and send me the full.” I thanked her and got up to leave (all of a half minute after my appointment began.) She asked me if I wanted her card and I smiled and said, “No. I know how to reach you.” Hell, I had her home and work addresses and phone numbers. Kate told me to take her card anyway. It wasn’t until a month later when I was going through my wallet that I saw she’d written me a message on her card. “Robin, send it to me. I really do want to read it.”

I fixed the manuscript, entered it in the Golden Heart, and won. I had an offer before I left Nationals, and sold the book before I even had a chance to send it to Kate. A few months later at the Moonlight and Magnolias conference I walked through the lobby and spotted Kate surrounded by about a dozen people. I waved and motioned that I’d see her later. She stopped the conversation, excused herself, and ran up to me. She threw her arms around me and said “Robin, I’m so proud of you! Congratulations on winning the Golden Heart and on the contract. Now come sit down and tell me everything.”

That was one of the best moments of my life. The one person I admired most in publishing was proud of me. My heart literally soared. We sat down together, I told her about my contract, and after I got up the nerve, I asked her the one question I really wanted to know the answer to: Did I make an ass out of myself when I gave my acceptance speech? Kate laughed. “Well, you did great, but if you hadn’t, I probably wouldn’t have told you. What good would it do? I tell the God’s honest, painful truth only when it will do some good.”

Kate dies a year ago last September and I miss her terribly but she gave me gifts that will last a lifetime. Hers is the voice in my head when I write. I hear her say, “Just write the damn book, Robin.” When I want to take the easy way out of a scene, I hear her telling me to dig deeper. Kate continues to bless me with her wisdom and generosity in ways I never would have imagined. And every time I’m feeling down, I remember how I felt to have Kate Duffy tell me she was proud of me. I work hard to make sure she always will be.