A Fascinating Woman by Shana Galen

But the most fascinating to me is my grandmother. She’s 92 years old and still going strong. 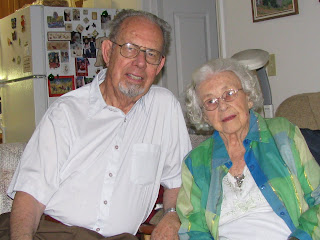 She attended Calvin College in Michigan in a time when women didn’t usually go to college. Not only did she attend college, but she majored in pre-med (or whatever they called it back then). She was the only woman in her class. And she was not welcome.

One time a professor gave her a B on a paper, and she asked why. He said she did A work, but he couldn’t give her an A because then all the men in the class would feel bad if a woman did better than they did. Seventy-something years later, my grandmother is still mad about this!

Sad to say, my grandmother didn’t become a doctor. She became a science teacher and a wife and a mother and, of course, my grandmother. She’s lived long enough to tell me so many of her fascinating stories. When my grandfather retired, they began to travel and have visited every country in the world except Iran and Antarctica. Pretty cool, huh?

Oh, and what does my grandmother do in her spare time? She writes. She self-published a book of daily devotionals about twenty years ago—long before it was easy or popular.

I know my own daughter probably won’t have the opportunity to hear my grandmother’s stories, but I hope one day I’m half as fascinating a woman as my grandmother is.