So I've been reading through everyone's wonderful posts about wonderful, exciting, ground-breaking, inspirational women, and I have to say, our gender has put out some wonderful examples for the younger set to emulate.

So then, explain these women to me: 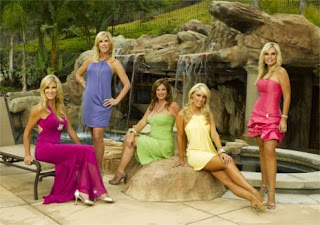 Yes, I admit, I'm hooked on the show. And before you start booing or throwing tomatoes, let me tell you why. With the rare rare exception of a (sadly) small number of cast members, I'll tell you my reasons, but first, the qualifiers:

So why do I watch this show?

Well, if you know me, you know that I love certain reality TVshows. Lost, The Amazing Race, sometimes even The Apprentice. I love the competition and the aspect of triumphing over adversity (the weather alone in Survivor would do me in, never mind the bugs). But it's the social aspect of these games that fascinate me. I loved how Boston Rob played a near-perfect, if not perfect, game this last season. Granted, it was his 4th time, so I'd hope he'd understand the strategy better, but strategy can only take you so far. You have to know how to interact with people. I've watched the teams on The Amazing Race go from super-nasty-competitive to honest competitors who pretty much across the board have a sense of fair play - people only Yielding another team to keep from being eliminated instead of trash-talking them and doing it just for the hell of it. The Apprentice has offered very interesting views of celebrities as real people on Celebrity Apprentice, but I have to say that I like the "real" version where people are vying for a job with The Donald.

But these women of Bravo just amaze me--and I don't mean in a good way. They aren't running a race, and there is no prize at the end of the season. Oh, sure, they can now peddle their Pinot Grigio, cookbooks, handbag/clothing/jewelry lines, or their songs (and I say that word loosely, because, honestly? most of them need friends to tell them the truth about their singing), but they end up with these deals because of the "good TV" they provide.

And I don't mean "good" as in it's actually "good." And this is where my reasons for watching come in: it AMAZES me, I mean, AMAZES me, how these so-called friends/sisters/in-laws/neighbors are willing to throw each other under the bus for ratings. For the chance at their 15 minutes of fame.

They're willing to open their children's lives up for public scrutiny. Their parenting skills and their own bad behavior are right there for the cameras. Are the children thinking this is okay? The sad sad thing is that, yeah, they probably are. Especially the younger ones who have no idea that the rest of America doesn't go around with cameras in their living room (or bathrooms as in one memorable O.C. episode that just skeeved me out for her part, his, and oh God, her poor kids!).

There are a few of the ladies that I applaud. Laurie from the original Orange County. Her son got in some serious trouble and she backed out of the show. Brava for her. Bethenney Frankel worked the reality TVcircuit with her own sarcastic blend of charm and has come out smelling like a tequila rose. Good for her (though that $50K speaking fee for a gig in NYC that I tried to book her for still kind of burns me up. $50K? Really? For an hour right outside your door? You're not quite all that, Bethenney. Of course, I don't know that there's anyone I'd be willing to pay $50K to listen to...). Carolyn Manzo - she says it like it is and if you don't like it, tough. But her heart seems to be in the right place. Lisa Vanderpump seems to be a decent sort with her willingness to take in strays and the way she's (so far) treated members of her family. Other than that, I am honestly amazed that I can't categorize the others as nice people I'd want to know.

Granted, I don't know these women. They could all be the nicest human beings on the planet, or they could be absolute witches. But it's the fact that they're willing to go on TV and air their dirty laundry (or lack thereof...Tamra, I'm talking to you!) for the world to see, and even sadder, for their KIDS to see... that just AMAZES me. (Have I said that enough?)

So, yes, I consider these women amazing, but not in the traditional sense of the word. They continually amaze me with naked make-out sessions, screaming table-tossing bad behavior, the trash mouths (Tamra and Gretchen, seriously - can you say ANYTHING without a foul word attached to it?), the back-stabbing, the entitlement (Jill, puhleaze!), the social climbing wannabees (Alex, seriously, it's over, hon), the snide comments, the incredibly indulgent lifestyles in the face of today's economy (can someone please tell me how I could declare bankruptcy and yet still live in a million dollar home and get my nails done??? Please????) and all the playing-it-up for the camera.

I have a circle of girlfriends in my neighborhood who have been getting together for the past 10 years. Ironically, this group started because of Survivor. I had had a party for the end of season 2 (Australian Outback) and a bunch of us decided we'd get together for the next season and watch it on Thursday nights. Well, here it is 10 years later, Survivor is (surprisingly) still on TV (though they did move it to Wednesday nights which is just so unhelpful. Thank God for DVR), and we're still together. This past Thursday night (no Survivor since the season is over) we were in one of the women's hot tubs. In a rainstorm. We started at 8 and left at 12:20 mostly because there are those of us who have to go to work at ridiculously early hours (raises hand). Many people who know about our group have suggested we try to get on Real Housewives. We've even laughed about it. I mean, we all have our share of drama. Life is not perfect off-TV. But the thing is, none of us WANTS to toss each other under the bus. None of us wants to expose our kids and our marriages to that kind of scrutiny (for kicks one day when I'm done my latest book I might do a survey of all the Real Housewives cast members' marriages - many of them have broken up on TV. Coincidence? I am really doubting it).

But the bottom line is this: if I'm going to be famous (and, let's face it, being famous helps sell books which is why SNOOKI GOT A BOOK DEAL! - and don't get me started on that show, which, no, I don't watch. My kids, however, have turned it on a few times, so yes, I do know who the characters are) for something, I want it to be for my accomplishments. Not for the amount of four-letter words I can shriek out with big hair, bigger jewelry, and complete disregard for the one thing the "Countess" lays claim to: class.

Yes, I will keep watching. I can't not watch. It's like a traffic accident that you're horrified by but have to see. I am AMAZED that there are people willing to put this stuff out there and will one day have to be horrified by the idiocy they perpetuated.

In the meantime, my girlfriends and I will enjoy our own Pinot Grigio (actually, Yuengling, Michelob Ultra, Smirnoff ice, and the occasional chocolate martini) in our friend's hot tub and share the good, the bad, the heartbreaking, and the joyous moments of our lives. Girlfriends are forever. Reality TV is not.

Anyone else who watches them, as appalled as I am? Anyone think I'm off my rocker and love the housewives?