Hope, Faith, and the Rules of Romance 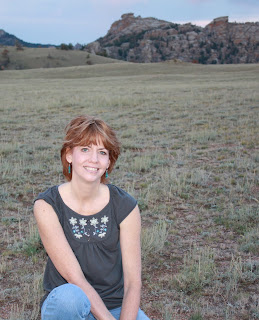 Hope is at the heart of every romance novel. The heroine hopes for love and a better life. The hero hopes he can be the one who helps her realize her dreams. The reader hopes for a happy ending. And the author hopes the whole thing works out, too.

Hope is a big part of my writing process. When I begin a book, I have an idea of how my story's going to go -- but so much depends on something beyond myself. Maybe it's inspiration, maybe it's a muse, but I think it's a kind of magic contained in stories themselves, something that brings them alive and makes all the pieces fit together like blocks in a Rubik's Cube sliding into place.

When I start a story, I hope the magic works. I hope my characters grow and develop in my mind until they become fully real. I hope my plot works as well in practice as it does in theory, with all those pieces sliding together to make a cohesive whole. I hope the themes I'm dealing with come to mean more and more to me as I'm writing, so they'll mean something to the reader when I'm done. 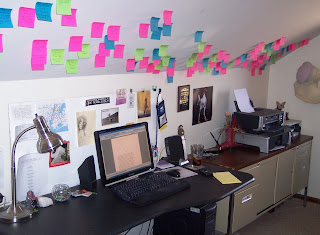 I once tried to write a novel without hope. I decided that leaving anything to chance was just too risky, so I created a massive, detailed outline before I started. I calculated every character's goal, motivation and conflict, and wrote little biographies for every single person who appeared in the story. I put each plot point on a sticky note, using different colors for the different types of scenes. I organized the notes on the wall of my little office in the attic, putting high-tension scenes toward the top, less exciting ones lower down (see picture). I used every technique I'd ever read about or learned in a workshop to make darn sure my novel would work.

It sounded like a sensible, productive way to work. If I had the story all worked out in every detail, I wouldn't have to count on inspiration or muses or magic, right? I'd know exactly what scene I had to write and what elements needed to be included.

But all that planning took the spontaneity out of the process, and it felt like I'd killed the poor story before it even started. The characters were boring. The plot felt flat and dull. Everything was pre-ordained, and there was nothing left to hope for.

So I tossed the outline along with what I'd written, set my characters loose to do what they wanted, and hoped for the best. It turned out the characters weren't the people I'd planned on, and the plot didn't go where I expected -- but the book, which turned out to be One Fine Cowboy, was just nominated for a RITA Award (yeah, I had to mention that somehow!). I've received lots of e-mails from readers saying they felt like I was telling their personal story in the book, so who knows where the magic came from?

Not that outlining is a bad thing. Doing it in that detailed way was still an education, and the various methods helped me understand the skeleton that lies under a story. And of course, different things work for different writers. I know a guy who writes an eighty-page outline for his novels, and he consistently makes the bestseller lists. So obviously, it works for some people!

But what works for me is outlining just enough to write a proposal and synopsis that bear some resemblance to the finished book. Then I let the story unfold as I go, and I love the way characters create themselves and determine their destinies as various parts of the story weave together in unexpected ways. In the end, hope is a big part of my writing process -- hope, and a little faith in magic.

Casababes, how does your writing process work? Do you outline, or set off on your adventure without much planning? Readers, are you planners or pantsers? Do you plan every moment of your day, or just fly by the seat of your pants?