The Illusion of Procrastination 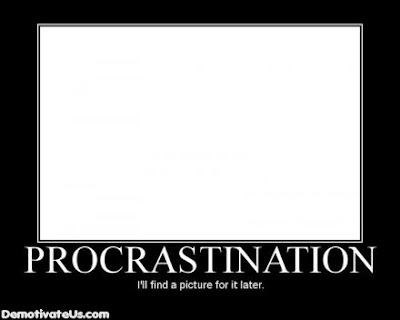 I can't put off writing this blog any longer. As I write, it is 7:05 PM on 4/18/2011. I have a riding lesson in the morning and I work the next three nights. Then on Friday, when this blog will post, I'll be heading to Kentucky to visit my sisters for the weekend--after I've slept for a bit. My sister doesn't have internet service. (HOW WILL I LIVE????) Therefore, this blog must be posted tonight.

As I've mentioned in my comments on the other blogs this month, I can't really say that I'm much of a procrastinator. However, if you're looking for a couple of world class examples, my DH and my eldest son are definitely in the running. I could go on about them for days on end, but since I'm feeling gracious and magnanimous this evening, I'll pass on that. Suffice it to say that Mike has a T-shirt that says "Procrastinators of the World Unite... tomorrow." And he wears it with pride.

Not being one to put things off (I hate having stuff hanging over my head), sometimes I have to force myself to procrastinate just a bit. Other people might call it "taking a much-needed break," but I did that a while back, and it felt very strange. After I sent in the completed manuscript for CSC #8, I took a few days off before I began book #9. I felt like I was slacking terribly. But guess what? I'm already 10,000 words into it and I haven't even gotten my edits back for #8. No, wait. That was only three weeks ago. Really???

You see, this illustrates the reason why a lot of us probably think we've been procrastinating. We simply don't have the luxury of taking our sweet time with our work anymore. Before I was published, I could crank out books like crazy. I printed them up and put them in Amazon boxes and let my friends pass them around. There were no deadlines to prove that I wasn't writing them fast enough, but I wrote ten of them in two years.

Then I sold that first manuscript. Suddenly, good time management wasn't enough because at any given time, I was writing one book, editing a second, and promoting a third. It nearly killed me. I've backed off since then, and though I'm sure there are folks out there who don't think I'm writing fast enough, well, if they want me to write faster, they need to come to my house and fix dinner, do the shopping, mow the lawn, clean the barn, and work my full-time nursing job for me. Granted, my DH helps with a lot of those things, but though he's great at picking up pizza, he can't cook worth a darn.

No matter how hard any of us try to keep up with everything that needs doing, we can't win. We prioritize, which means that some things have to wait, giving the illusion that we are procrastinating when we are really doing everything we can as fast as we can. So, while the computer sits there, its cursor blinking at me as if to say, "You'd better get busy! You've got a deadline!" There will always be grass that keeps growing, cat hair that piles up in the corners, and a refrigerator that needs restocking. The best we can hope for is to get done that which needs to be done before someone lowers the boom on us.

Then there is that other nightmare that only makes us seem like we're procrastinating: The increasingly faulty memory. I used to have an excellent memory and rarely forgot to do anything. Not so anymore. Age has taken its toll, and now that I'm trying to do so many things at once, I've become a hazard. My son Sam worries to the point that he calls me to make sure I've turned off the stove. And he has good reason to worry, but what this also does is make it appear that I'm putting things off, when in reality, I've just plain forgotten.

So, the next time someone accuses you of procrastinating, tell them they've got it all wrong. You're really doing the best you can to keep up, it's just hard to remember everything.