By Elisabeth Naughton February 19, 2011
Late, but not never! (Someday I will learn how to set the post-ahead feature, I swear I will.)

I've had a lot of fun reading the first kiss posts this month. And I absolutely love reading first kiss scenes in romance novels. They're all so varied. One I have yet to read, however, is the first kiss gone wrong. Be honest, most of our first kisses probably didn't go the way we planned. Take me, for example. I remember my first kiss well. I was in middle school, and I'd had a crush on this boy for months, and he knew it. At one of our school dances he asked me to dance. I was giddy with nerves, super excited. He didn't say a word to me during the whole song and I didn't talk to him either, but when the music died, he kissed me on the cheek. Sounds sweet (and tame), right? Uh, not to me. The moment he kissed me my insides flipped from giddy to revolted and whatever crush I'd had on that boy flew right out the window.

First kisses don't always go the way we planned. But I've yet to read a first kiss scene in a romance novel that wasn't heart-stopping and soul-rocking. The reasons are obvious...one, it's a romance novel, the kisses are supposed to be heart-stopping and soul-rocking. But the other reason is that by the time most women have reached romance heroine age, they've already been kissed...by someone. But what if they hadn't? 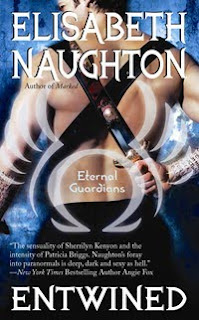 In my last book, ENTWINED (book 2 in my Eternal Guardians series), I had a secondary character who had never been kissed. Her name was Isadora and she's the cloistered princess of the land and the one female, by law, who is still a virgin. She has no experience with men, is shy and self conscious, and everyone--including her father the king--thinks she needs a man so that the Council of Elders won't overthrow her rule when the king eventually passes on. Through a series of events, her father betroths her to one of his Guardians, the warriors of the land, and Isadora finds herself about to be married to someone she doesn't like, doesn't really know, and has no desire to get close to.

ENTWINED is really Zander's story--the Guardian Isadora's father has betrothed to--and Isadora is not the heroine of that book, though she plays a large part in the story. But when the two became engaged--even though it was neither's choice--I needed to show that Zander was committed to the union. So after the King makes his announcement, Zander goes to see Isadora in her chamber, and through their conversation, the scene leads to Isadora's first kiss. 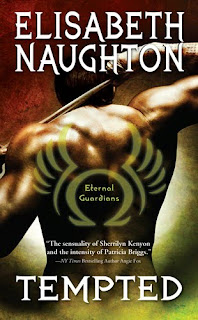 Her reaction to her first kiss wasn't the same as my first kiss. Oh, her stomach didn't turn over like mine did, but after 200 yrs of imagining, she wasn't exactly elated by the experience, either. There's no passion, there's no toe-curling, there's not even a spark when their lips meet. And when she looks up at Zander after the fact, she can tell no fireworks went off for him either. I've read lots of "romance writing rules" that say the hero shall not kiss anyone other than the heroine after the heroine shows up in the book, but in this case, this kiss between the hero and someone who is not his heroine--Isadora's first kiss--was important for both Zander's arc and for Isadora's character growth. And Isadora, by the way, is the heroine in book three--TEMPTED--my October release with Sourcebooks, so her character growth is definitely important in the grand scheme of the series.

What about you...was your personal reaction to your first kiss different from what you expected? And have you ever read any first kiss scenes in books that weren't all fireworks and tingles...and maybe could be considered, well, as going wrong instead of right?

I've got two books to give away to two lucky commenters today. One winner will win a copy of MARKED, book one in my Eternal Guardians series, and one will win a copy of ENTWINED, book two. Simply leave me a comment answering the above question.