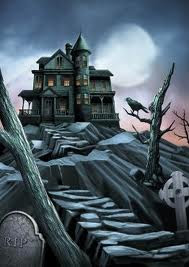 I want to be haunted.

Nothing too scary. I don't want the walls to bleed or anything; I just want a good story to tell. Maybe a being from another world could send mysterious lights bobbing down the hallway. Or maybe there could be a little fiendish laughter emanating from the attic once in a while. I'd like that.

But no. I am apparently the antighost. I've lived in many houses that should be haunted, but the minute I move in, everything gets all normal. Bummer.

For instance, my grandparents' farm in Maine was built in the 1800s. The attic was my favorite place to play, because it was full of old stuff and I was sure there had to be a ghost up there. There were framed sepia photographs of people in fancy clothes, and all of them had somber expressions and weird dead eyes. I later learned this was because they had to sit still and stare at the camera for ten minutes to get their pictures taken, but at the time I was convinced that all my ancestors were zombies.

There was an old melodeon up there too, and after my piano teacher taught me to play minor chords I could make the whole place resound with creepy organ music that made you think Vincent Price was going to pop out of a steamer trunk at any moment.

But nothing. Ever. Happened.

Later I moved to the Pennsylvania countryside and rented a farmhouse that was built in 1757. I used to imagine what it was like sitting by the enormous fireplace knowing that the Lenni Lenape were out there in the woods stewing about the Walking Purchase and vowing vengeance. The house had been built over a spring that bubbled up in the basement so you wouldn't have to go outside for water if you were under attack. Surely someone, sometime had died in that house. And surely at least one of those people had unresolved issues.

But the only scary thing in the house was the gigantic salamanders and frogs that hung out by the spring in the basement. The Orkin Man doesn't do amphibians, so we just had to live with them because I sure as heck wasn't going to pick a fight with a frog the size of a Yorkie.

That night, Scrape was awakened by the sound of a high-pitched scream. Me? I slept through it. Never heard a sound. And he didn't wake me up because he was afraid I'd be scared. He told me about it in the morning, acting all superior and stuff because he had experienced the Occidental ghost.

But I missed it. Of course.

For a while I lived in an old house here in Cheyenne, Wyoming that had been built by a funeral director. It had woodwork that was carved by coffin makers. Spooky, right? Better yet, there were three huge, ancient pine trees outside the house that were home to a flock vultures. Big, black turkey vultures, with ugly bald heads, mean little eyes, and an appetite for roadkill. They would hunch in the trees all morning, staring down at the house, and then fly up and circle it all afternoon looking for dead stuff.

The guy who owned the house lived in the basement. I was convinced he'd killed his wife and hidden her in the yard somewhere and that's what the vultures were looking for. But my theory was destroyed when she turned up one day alive and well. Turned out she'd been living in California.

Now I live in a house that was built in 1936. That's not the eighteenth century or anything, but it's still plenty of time for the people who lived there to develop unresolved issues and die, which is apparently what leads to effective ghost-hood.

Before I lived there, Scrape and his son heard ghostly footsteps at night. Doors opened and closed mysteriously. And once, Scrape swears that something grabbed his leg in the hallway. Whatever it was didn't bite him or anything (which is a shame, because ghostly toothmarks would have been ultra-cool), but it hung on for a minute with its cold, cold hands.

Ooh, I wish that would have happened to me!

But no. I moved in, and the ghosts moved out. I have an office in the attic, which is sort of spooky--but there's no weird cacking laughter, no sudden gusts of cold air, no fireballs or strands of ectoplasm floating around.

Maybe I should sell my skills for settling the restless dead. If you have a haunted house, I could come stay there and everything would get boring and normal again. Because ghosts don't scare me, even though I'd like them to.

Evidently, I scare them.

Have you ever lived in a haunted house or been visited by a ghost? Tell me your ghost story. Go ahead, make me jealous!