By Cheryl Brooks August 08, 2010
Just because the word change has six letters in it doesn't mean a thing. For many of us, it's the worst curse word of all. I've been seeing a lot of it lately, in the book world, the nursing world, and on the home front.

First off, I'm starting book eight in The Cat Star Chronicles, and for the first time ever, I actually have a synopsis to go by. This doesn't necessarily mean that I will follow it to the letter, but I do have some idea of where it's going. I also came up with a title and a premise for book nine, but the plot remains a mystery. All I have is this image of a Zetithian with long black hair on a big, black horse. . . and nothing else. No clothes, no bridle, no saddle--you get the idea. I don't know about you, but just watching him ride in and then ride off into the sunset would be enough for me. Not enough for our dear editor, of course, but it's a place to start.

Major changes have also been happening at the hospital where I have worked for the past twenty years. We were bought by one of the biggest health care systems in the country, but things have not gone smoothly. The best I can say about it is that I've been off for about two weeks, and ignorance, at least in this case, is truly bliss.

On the home front, my eldest son, Mike, is heading back to Purdue to start graduate school next weekend. Just when I get used to having him around, he's gone again.

I could go on, but why bother? The real challenge is to figure out how to deal with it. I'm the first to admit that I haven't always handled it well, but lately I've reached a somewhat fatalistic stage where I realize that change will occur whether I like it or not, and there's not a whole helluva lot I can do about it.

Perhaps the change in me has occurred as a result of all the changes in the world around me. I've reached a point where the only thing I can do is accept it. I don't have to like it--though it would be nice if I did--but I'm not going to waste energy trying to fight it. I still put in my two cents worth, so I can't say I just rolled over and played dead, but the mental stress doesn't do me or anyone else any good, so why succumb to it?

There are those who love having drama in their lives and feel lost without it. I'm not one of those people. I only want things to flow smoothly and don't go looking for trouble. I leave that to my characters!

But, of course, there are some times when change is a VERY good thing! 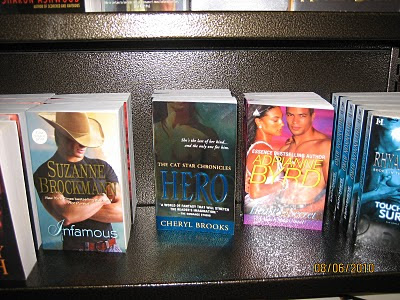