Our Memories of RWA Nationals 2010

By Cheryl Brooks August 04, 2010
Terry Spear shares
My mission at Nationals was to find a wolf. Mice all over the place, Mickey, Minnie, Goofy looking dogs, and dogs named after planets. Wolves??? The closest I got was The Three Little Pigs in a store in one of the International Worlds in Epcot. Not that wolf. That's where they tell about a big, bad wolf. So the search was on.

But in the meantime, (I had flown to Orlando from Pensacola the weekend before where I had watched my son get married, and danced with him to a groom/mother dance--all very touching and I fought tears but didn't succeed when the bride, Malinie's sister cried during a speech, her brother did, and then my daughter did...that was it...and of course, Malinie's mother was crying beside me, so I didn't stand a chance. But it had a happily ever after ending and they went to Hawaii--and found all four of my wolf tales in B&N!!!!)...I was at the Magic Kingdom, Hollywood Disney, and Epcot with my daughter before the conference really kicked in. So I missed most everything, but spent a lot of quality time (very hot humid, lots and lots and lots of walking for hours) with my daughter.
And after the wonderfully fun literacy signing where I sat next to Kerrilyn Sparks, vampire author, which seemed appropriate that my werewolves (since she has them in her vampire books) were nestled together with hers, I am happy to say my line was nearly as long as Kerrilyn's at times Wednesday night. :) 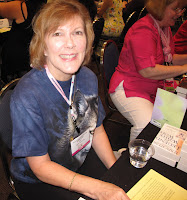 But the search for a wolf went on into the wee hours of the morning as we stayed out until 1 am, closing down all the theme parks night after night. In the early morning hours, I was back to blogging to fans, to keep them informed of all the fun that was to be had. I spoke as the keynote speaker for From the Heart Thursday night and loved meeting fellow authors from the chapter, then it was back to Epcot. It was my last night at any of the theme parks. No more chances to find a wolf. Not even in Norway, where I was sure they would include a wolf or two in their displays. No, not there. But much closer to home! In Canada. Woohoo, Canada! I found my wolf pup and so proudly displayed him on my table for the Sourcebooks signing on Saturday!
But before that big event, we had the Sourcebooks dinner! In the limo ride over there, here is Amelia Grey, Sharon Lathan and Robin Kaye. I think she was taking pictures without a camera! :)

Here is Danielle, our Sourcebooks publicist, hard at work, setting up the tables for the Sourcebooks signing. :) 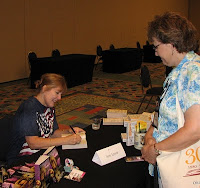 This picture was taken by my good friend and critique partner Vonda, and her good friend, Dana, while she waited for me to sign a book for the Sourcebooks signing Saturday afternoon! Unfortunately, after all that searching to find a wolf, he's hidden behind Dana! :) But the wolf mug was sent to me by a fan, and proudly displays my wolf book marks!
Here are Sara Taney Humphreys, Olivia Cunning, Sharon Lathan, and Cheryl Brooks at the Awards Dinner that night all dolled up and ready to party!! 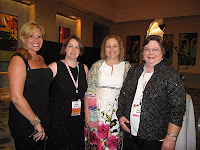 Like Sharon, I was so surprised to see all the Sourcebooks authors and I had a grand time meeting and visiting with you all! This was my third National conference, though I've been to Shreveport twice for their conference, to Dallas, Fort Worth and San Antonio. But I have to say that this conference was the best ever yet! And I can't wait to go next year and see everyone again!
Cheryl Brooks shares
When Nashville got hit by that devastating flood earlier this year, I figured the RWA National conference would be canceled. I still can't believe they got it switched to another venue so quickly. A truly amazing feat! 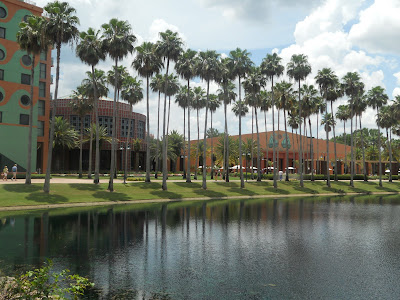 I had this vision of all the goody bags saying Nashville on them and many of the workshops being eliminated, but such was not the case. And, according to one spokesperson, very few of those registered for the conference canceled.

I learned a ton of things, but the high points were Linda Howard's 12 Stages of Intimacy--no one, and I do mean NO ONE could have done it any better. Unfortunately, she announced that she was retiring from public speaking, which is a loss to everyone in RWA.

My Indiana chapter president, Sandy James, gave a fabulous workshop on the role of psychology in romance writing, called Freud Knows Romance. She had a packed room and everyone thoroughly enjoyed it. I was very proud to be a part of it, even though all I did was pass out and collect the raffle tickets!

Our Sourcebooks Spotlight, signing, and dinner were all very enjoyable, but I was astonished when fully a fourth of the audience at the spotlight were Sourcebooks authors! We certainly have grown over the past 3 years! It was good to see those I'd met last year, but one of the high points for me was finally meeting Mary Margret Daughtridge (she looks like she belongs in that limo, doesn't she?) 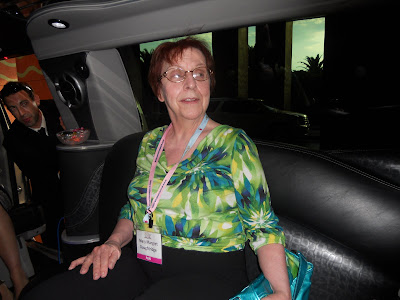 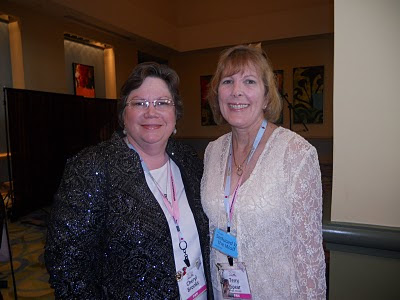 It was so much different actually knowing some people there; some from RWA and some I met at RT this spring, and just seeing familiar faces made me feel more comfortable.

I didn't get to see much of Disney World, but my only regret was missing out on Harry Potter, though I did get a T-shirt at the airport! My family and I were there when Epcot and Universal Studios were fairly new, but we went in early June when it was a bit cooler.

Yes, Orlando was beautiful, but it was also incredibly hot--and so were the waiters. LOL! Well, maybe just this one. . . 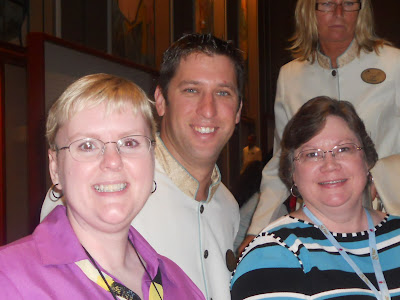 That's my INRWA prez Sandy James on the left. I spotted him first, but she's the one who asked for a picture!

Sharon Lathan shares
This was my second conference, ever and of any kind. Last year I largely felt lost and to a degree like a fraud even though I did have one novel published. This year I largely felt as if I belonged, and if the fan-girl mania burst forth upon occasion (read on) somehow the gap between myself and the big-time authors did not seem as vast. I actually understood the PAN chats on marketing and BookScan figures. I nodded along with Jennifer Ashley when she spoke on how to handle bad reviews or when Elizabeth Hoyt gave tips on powering through when a stubborn muse deserts you. My confidence was firmer when unpublished writers asked my advice/thoughts on the business. All in all it was a marvelous experience that left me as exhausted as Washington DC did (probably worse since I was with the family and we threw in Disney World for good measure). It also charged my inspirational batteries and increased my pride in writing and working with the fabulous folks at Sourcebooks!

Here are just a few of my personal highlights-- 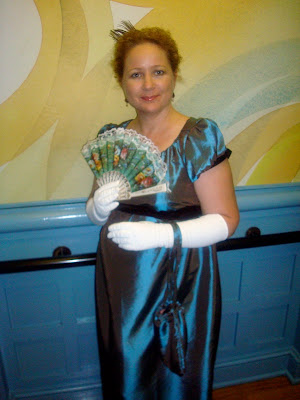 Dressed up for the Beau Monde soiree. The entire Beau Monde chapter conference, held on Wednesday, was terrific. I hung out with Abigail Reynolds, met many of my fellow Regency writers, and visited with Michele Ann Young - a former SB author who is our chapter's president! So fun! 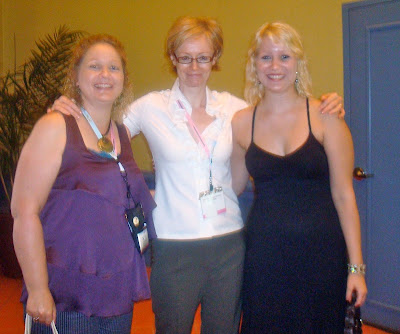 Finding the nerve to approach Eloisa James! She was amazing. We chatted about her fantastic speech last year and our mutual experiences in the NICU - mine as an RN and her's as a mom. 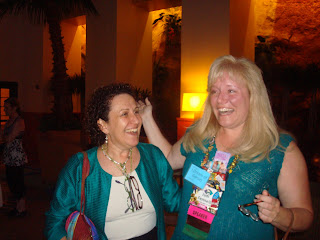 Being there when Judi Fennell had her I-just-won-the-Prism-award meltdown! Hehehe... I told you I was going to post it Judi! Congrats, my friend. We are so proud of you. 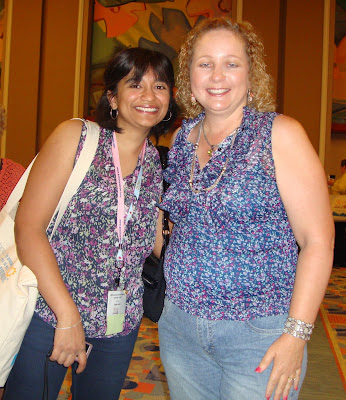 Looking up at the Sourcebooks signing and seeing Nalini Singh in my line! As you can probably tell from this ghastly shot of me, I was in a state of shock and awe! She waited some 15 minutes in my line for signed copies of my two novels. In a word: surreal.

I won't take up more space, but have to say that the high points were numerous. The SB Spotlight was wonderful, our dinner at Ceviche was loud but delicious and fun, both signings were terrific. But weaving through the signings and workshops and luncheons was visiting with my editor, publicist, marketing manager, publisher, and the truly astounding group of women who write for Sourcebooks. You are my friends and I am deeply thankful.
Mary Margret Daughtridge ringing in
Cheryl and Sharon have already hit the highlights, and I'll have to say meeting them was one of the highlights for me--in fact, one of the first things I did.
Y'all know how navigationally challenged I am. Well, both Swan and Dolphin hotels are organized around circular lobbies. Not that I always know my right from my left, but to find myself in a place that "turn right or left" means nothing was a nightmare.
So there I was on the first night, and I was so-o-o-o tired I was in a daze, and I knew I had gotten into the hotel somehow, but I couldn't remember, and I was just going around in circles, and finally I walked up to this kind-looking woman and said, "Will you please tell me where the door to the outside is?"
She looked at me, shock and confusion in her eyes. I was wondering if the question was something I should apologize for, when she cried out, "Mary Margret! I'm Sharon Lathan!" And scooped me into her arms.
For me, experiencing delight and genuine affection at seeing someone I had never actually met, and then repeating that experiencing it again and again as I met my other Casa sisters burnished the busy days and nights with charm.
Frankly, I've always wondered if it was possible to get to know people through blogs. I see now that it is.